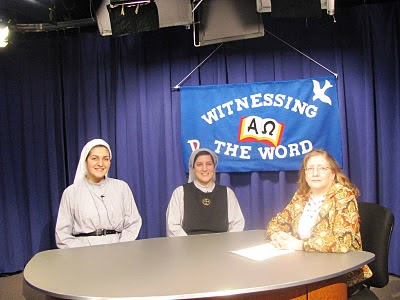 On Wednesday March 16th, the Maronite Servants were interviewed about their mission at a local television cable station, Weymouth Community Access. The program, “Witnessing the Word” is produced and hosted by the parishioners of Immaculate Conception where the Sister’s currently rent a convent.  These photos were taken at the studio with our host Anne Mc Laughlin.
Email ThisBlogThis!Share to TwitterShare to FacebookShare to Pinterest
Labels: News 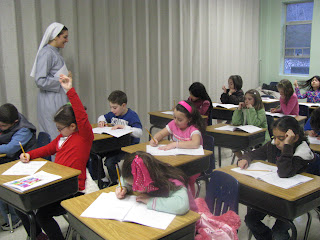 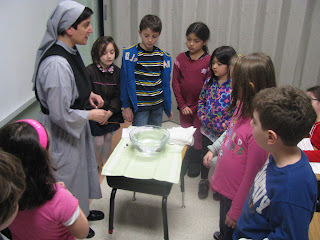 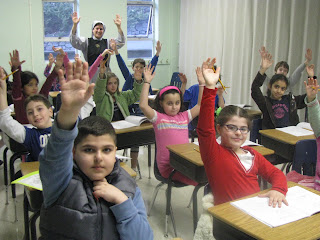 At the invitation of Rev. Father Robert Rabbat, pastor of Annunciation Melkite Cathedral Parish, the Maronite Servants are offering catechesis to the third grade in preparation for the Mystery of Penance.
Email ThisBlogThis!Share to TwitterShare to FacebookShare to Pinterest
Labels: News

We Have A Patriarch

﻿
﻿The Synod of Bishops in Lebanon have elected a new Patriarch of the Maronite Church the morning of March 15, 2011. The 77th Patriarch is His Beatitude Bechara Peter Rai, who was the Bishop of Jbeil (Byblos).
“The Glory of Lebanon is given to Him.”

For more information, you can visit the Patriarchate’s website  or in  English.
Also, view a recent video interview of the Patriarch while he was Bishop (video in Arabic).  Also, videos on Telelumiere.

Congratulations to Lebanon and to the whole Church.  May God bless him for many many years. We will accompany Patriarch Peter Rai in prayers, and we are grateful as well to His Beatitude  Nasrallah Peter Cardinal Sfeir who served the Church for the last 25 years as Maronite Patriarch of Antioch and all the East.

By Aboona Anthony J. Salim, pastor of St. Theresa Parish, Brockton MA
Many of us from childhood have learned a basic idea about what Lent is all about. For example, we think that we do something during this Season in imitation of Christ’s suffering. This is good, as far as it goes. Our self-denial in imitation of Christ makes us more mature Christians and strengthens us for the Christian “battle” against the very real power of the Evil One, a power that is once again quite evident in our day. Therefore, the Eastern Traditions, of which we are one, have known this time as the “Great Fast.” ﻿
﻿

To this day Lebanese Maronites commonly call these days leading up to Easter as simply, “The Fast.” (Ask any of those born in the Middle East the Arabic word for Lent.) What many have never learned is that Great Lent was also seen in the early Church—and revived correctly in the Roman Tradition—as one piece of a whole process whereby men and women who were never baptized prepare themselves for entrance into the Community of the Saved, that is, the Church. These people are known as “catechumens,” as they are learning about Baptism, Chrismation and the Eucharist. For those in the process Great Lent was the “Period of Enlightenment.” Enlightened, they looked forward eager to the Easter Vigil to be baptized.
The Sundays of this Season in our Maronite Church are:
Cana Sunday/Entrance into Great Lent
Sunday of the Man with Leprosy
Sunday of the Hemorrhaging Woman


﻿﻿﻿
﻿﻿﻿ On Sunday February 20th, we had an enthusiastic group of youth from Immaculate Conception Parish in Fayetteville, NY visit our monastery. Kelly Colangelo, their youth minister and a friend of Mother Marla Marie, arranged for a “Boston Plunge” designed to engage the youth in various mission work for five days. Some of their events included helping the Little Brothers of St. Francis with street ministry, and visiting with the elderly at the Little Sisters of the Poor nursing home.

It was certainly a gift for me to join them on one of their mission days with the Little Sisters of the Poor. I enjoyed being with the teens as they took great initiative in entertaining the residents by their joyful singing and dancing, and in helping the residents make different crafts. They sure brightened their day with their energetic presence and smiles!


Overall, I could see how this mission trip gave the teens the unique opportunity to reach out to others with compassion, and to see Jesus in the person they speak to and serve. One of the teens happily shared with me that this trip has been “enlightening”. Their perspectives on the Church was broadened for the better, as they met with and spoke to various religious brothers and sisters throughout the Plunge.
﻿
﻿
Email ThisBlogThis!Share to TwitterShare to FacebookShare to Pinterest
Labels: News
Newer Posts Older Posts Home
Subscribe to: Posts (Atom)