Glorious Birth of Our Lord 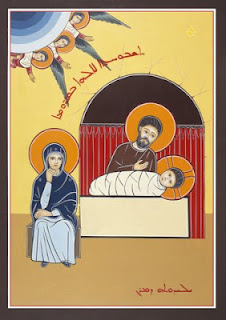 The Divine Liturgy in the Maronite tradition often mentions the title "Mary, Mother of the Light." The opening prayer of the liturgy used to mention it every day. This title is rich in theological and spiritual significance and is indeed one of the treasures of the . The image of light conveys a sense of joy, festivity, and life. Religion uses the image of light to express the notion of purity and the presence of God, Since light is the element which is proper to the divine Being, from ancient times the pagans adored the sun. At the end of December, the pagans celebrated a feast dedicated to the "Unconquerable Sun." In fact, on December 21st the nights, which had been becoming longer and longer, begin to shorten. The ancients celebrated this conquest of the light over the darkness.


When Constantine granted freedom for Christians to worship publicly, it was appropriate to replace the celebration of the Unconquerable Sun, with the Feast of the New Sun of the world, to celebrate the birth of Jesus, the Light of the world (John 3: 19).
The image of light is found throughout salvation history. The Aramaic Fathers of the Antiochene tradition teach us that creation is a preparation for the incarnation of the Son of God. All was created by the Father, through the Son. Scripture tells us that the first thing that was created is the sun: it is the heavenly body which gives forth light, warmth and life itself. The sun is the image of the Son of God because Christ himself is that light which comes from heaven. As a ray of light coming through a cloud, he appeared from the Virgin Mary. When God created the world, he separated the light from the darkness and throughout the Old Testament, one finds the light and the darkness contrasted with one another. In the New Testament, there is a constant struggle between the light and the darkness.


The genealogy in the gospel account of Matthew describes the human ancestry of Jesus and, as such, lists the sinners whose sins Jesus had to bear. This is the side of darkness in the spiritual realm. Saint John describes Jesus as coming from God, light from light: "I have come to the world as its light to keep anyone who believes in me from remaining in the dark" (John 12: 46). The account of the birth of Jesus contains the image of light throughout. The shepherds saw a great light, "The glory of the Lord shone around them" (Luke 2:9). The Magi saw a brilliant star in the skies, and followed it (Matthew 2: 9-11). The shepherds said, "let us go", and the Magi said, "we saw a light and we came” (Luke 2:15; Matthew 2:2).


Throughout the life, death and resurrection of Jesus, we find the image of light used to express his divinity. His baptism was a true revelation and, as such, a great enlightenment. During the transfiguration, Jesus was surrounded by light (Matthew 17: 2-5). When Jesus died on the cross, darkness came upon the earth (Matthew 27:45) and the soldier, standing at the foot of the cross, was moved to say, ''Truly, this was the Son of God" (Matthew 27:54). The resurrection itself was blinding light (Matthew 28:2). The descent of the Holy Spirit at Pentecost is described as "tongues of fire" (Acts 2: 3). Upon seeing a great light and being thrown from his horse, Saul came to believe (Acts 9:3). While in prison, Peter saw a bright light and was freed from his chains (Acts 12:6). Just as the shepherds and Magi saw and followed the light, we who have seen the Light must follow. Jesus told us, "Walk while you have the light" (John 2: 19; 5:34; 12: 35-36). This feast of the Birth of Our Lord, the Light of the world, should be an incentive for us to be the light of the world (Matthew 5:14).


"The night shall be no more. They will need no light from lamps or the sun, for the Lord God shall give them light and they shall reign forever" (Revelation 22:5).

Seventh Prayer (21 December):
All: O You Who are One person but also have human nature; You Who have told us what You have heard from the Father; we beseech You, through Your Pure Nativity and the inter¬cession of Your Mother and Saint Joseph, Your Chosen One, to grant us an ardent belief in and be captivated by Your teachings, and grant us good acts to harmonize with them. Do not permit us to lose the reward of our faith because of our own wrong doings. Rather, make our lives fruitful in beliefs and good works. Amen.
Our Father; Hail Mary; Glory Be ...

Eighth Prayer (22 December):
All: O King of Great Counsel, You joined Your admirable power with the prudence of human judgment when You, the Mighty and All-Powerful God, fled into Egypt from the face of Herod. We beseech You, through Your Pure Nativity and through the intercession of Your Mother and Saint Joseph, Your Chosen One, to grant us good judgment in all our actions, that we may think and act wisely all the days of our lives, as we subject ourselves to Your divine service. Amen. Our Father; Hail Mary; Glory Be ...

Ninth Prayer (23 December):
ALL: O God, Who in Your very nature contains all the riches of heaven and earth, You loved the poverty of humanity by choosing to become one of us. You are the descendant of Kings and the Heir of David the Venerable. You were satisfied to be born in a stable and a humble manger. We beseech You, through Your Pure Nativity and through the intercession of Your Mother and Saint Joseph, Your Chosen One, to grant us an appreciation of voluntary poverty. May we be satisfied with only that which is necessary for the maintenance of our lives. Teach us to flee from excessive luxury and the love of abundance all the days of our lives. Amen. Our Father; Hail Mary; Glory Be ...
Email ThisBlogThis!Share to TwitterShare to FacebookShare to Pinterest
Labels: Liturgy, Maronite Identity 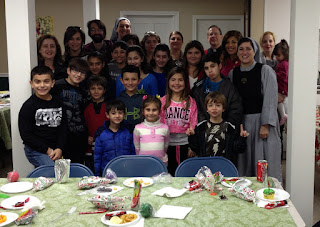 On December 15, we hosted a Maronite Faith Formation class and Christmas celebration at Our Lady of Purgatory in New Bedford. In the presence of a nativity we shared the Christmas story with the children and had a program for the parents which included, christmas carols, prayer and refreshments. 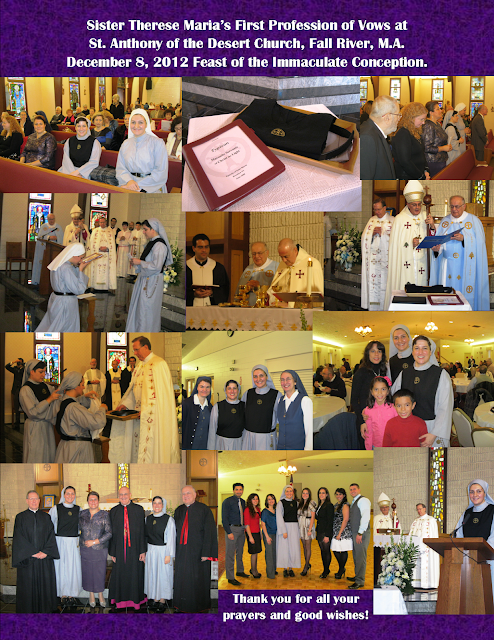 On Saturday, December 8 2012, Feast of the Immaculate Conception, Sister Therese Maria Touma professed First Vows as a Maronite Servant of Christ the Light during the Qurbono at Saint Anthony of the Desert parish in Fall River, MA.  His Excellency, Bishop Gregory Mansour, several concelebrating clergy and over 200 people attended the celebration.  Mother Marla Marie received Sister Therese Maria's vows after the homily (as you can see from the photos).
It was a beautiful and blessed day in the journey of the foundation of the Maronite Servants.  Sister Therese Maria addressed the congregation at the close of the Qurbono:

“My soul rejoices in the Lord my Savior…The Mighty one has done great things for me, and holy is his name.” (Luke 1: 47, 49)
Yes, truly he has filled me with the fullness of his awesome love. Thank you to all for your encouraging presence and prayers, and for sharing with me such a joyous occasion. In gratitude to our Good God, I thank him for the gift of my calling as a Maronite Servant of Christ the Light, and for the grace to respond to this life-giving invitation to be all for Jesus, and to love and serve our Church.
I thank my parents Youssef and Jackie for all their sacrifices and love in raising me and my siblings Alison and Roumanos. I am honored to have my mum here with me all the way from Australia, representing my loved ones, family and friends back home in Sydney.
There are many who have touched my life and made a positive difference. They know who they are and I thank God for each of them.
In particular, I thank His Excellency Sayedna Gregory Mansour for his inspiring words, caring presence and faithful witness of fatherly and brotherly love.
I am deeply grateful to the generous abounas (priests) who have supported me in my journey of discernment and formation, and especially for those here today.
In a special way, I thank you Mother Marla Marie for your self-giving dedication and uplifting presence in my life as a guide, formator, and dear friend. In the last three years of formation, I have seen myself grow in the acceptance of my humanity, and in compassion for my neighbor. Thank you for your goodness, for all the joys, challenges, and the sharing of your life experiences with me, in community. This all has helped me to grow in my understanding and living of true communion and love. 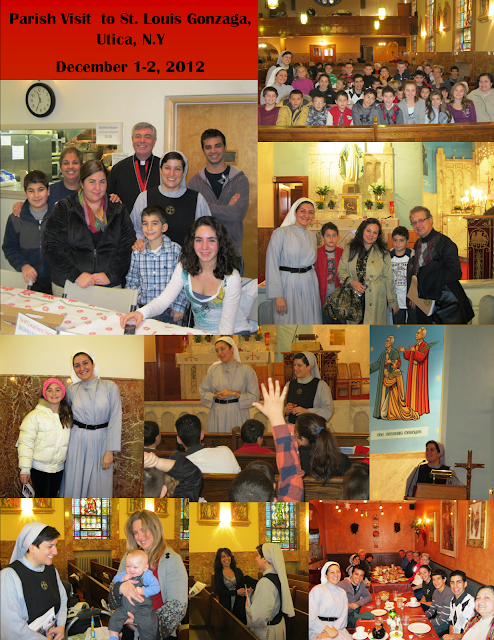 We visited St. Louis Gonzaga parish in Utica, N.Y. last weekend December 1-2 and spoke to the religious education class on vocations.
Chorbishop John Faris, pastor of the parish graciously welcomed us and gave Mother Marla Marie the opportunity to speak at the Liturgies sharing on our Maronite Servant mission and the importance of praying for and encouraging vocations in the family and parish community, to religious life and the priesthood.
We also met with some of the ladies from the St. Mary’s Ladies guild, the MYO and the Catechists. We were blessed with a fruitful visit and were part of the family spirit of the parish. God willing, we hope to come back to Utica in 2013 to facilitate a ladies retreat for the St. Mary’s Guild and offer practical workshops for the catechists.
Email ThisBlogThis!Share to TwitterShare to FacebookShare to Pinterest
Labels: News, Photo Collage
Newer Posts Older Posts Home
Subscribe to: Posts (Atom)