“The Attack on Religious Freedom in the United States of America”

“The Attack on Religious Freedom in the United States of America”


Delivered at the Rally for Religious Freedom, 8 June 2012 at Lee Plaza , Roanoke, Virginia

Anyone who reads the Catechism of the Catholic Church (promulgated by Pope John Paul II in October of 1992) knows that, in the eyes of the Church, contraception (CCC 2370), sterilization (CCC 2297, 2399) and abortion (CCC 2270-2275) are regarded as serious moral evils. That teaching, in the area of sexual ethics, was not new in the early 1990’s. For example, the doctrine on contraception set forth on behalf of married couples by Pope Pius XI (Encyclical Casti Connubii, 1930) was reaffirmed by Pope Paul VI in Humanae Vitae in 1968.

Why, then, would the Catholic Church in her efforts to evangelize the culture undermine her own teaching with respect to non-Catholic employees who work at Catholic institutions, such as colleges and universities, hospitals and day-care centers, nursing homes and soup kitchens? The answer, of course, is that the Catholic Church does not promote two different moral codes: one for her own members and another for non-Catholics.

It is both amazing and disturbing that the United States Department of Health and Human Services, in its mandate of January 20, 2012, is trying to force Catholic Christians and others to compromise our consciences as regards contraception, sterilization and abortion-causing drugs. Have our leaders in Washington, D.C. forgotten the meaning of the word “complicity”? It is an important word found in criminal law and in moral theology. Complicity has to do with being a partner in wrongdoing. For example, a person who provides money for an abortion is complicit in the same evil as the one who seeks the abortion and the one who performs the abortion.

How is it possible, in this “land of the free and the home of the brave,” that faith based communities are being threatened by the federal government for not making a mockery of our beliefs, for not giving to Caesar what belongs to God? The 1st Amendment to the Constitution of the United States of America declares, in part, “Congress shall make no law respecting an establishment of religion or prohibiting the free exercise thereof…” If, however, we have arrived at a point in our history where Catholic Christians, Orthodox Christians, Protestant Christians, Jewish congregations and other religious entities can be coerced into going against our convictions in order to satisfy an arbitrary federal mandate touching upon insurance coverage, then the Constitution shall be rendered null and void in the matter of religious freedom and people of faith shall be turned into second class citizens.

Dear brothers and sisters in the Lord, dear fellow Americans, our founding fathers who gave us The Declaration of Independence and The Constitution knew how to go to their knees and pray for this nation, this one nation under God; let us also kneel and pray. May God bless you and your families: God bless the U.S.A. Amen.
﻿
Email ThisBlogThis!Share to TwitterShare to FacebookShare to Pinterest
Labels: Pro Life 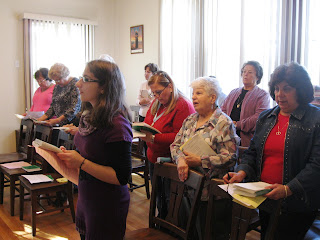 On Saturday October 27th we hosted a retreat day for St. George’s Rosary Sodality, Providence, R.I..  In the morning,  Fr. Ed Nedder, pastor of St. George, offered Divine Liturgy in our chapel assisted by Deacon Enzo Digiacomo. The day’s program include  two presentations on prayer and scripture, lunch, group sharing, quiet time for reflection, and adoration. The women found the day to be spiritually refreshing, peaceful and relaxing.

We were assisted by two young adults , Sandra Mattar from Our Lady of the Cedars Church, and Emiy Lattouf from St. Theresa’s Church. They did a great job in helping us to facilitate the day. 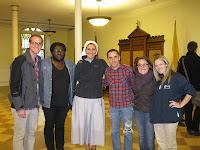 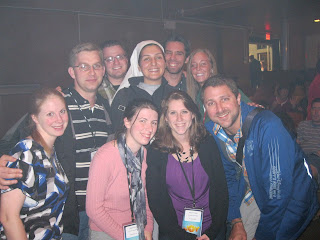 SisterTherese Maria attended a three day Life Teen Leadership Conference in Dedham, M.A. This was a great opportunity to learn how to effectively engage teens in their faith and bring them closer to Jesus through; relational ministry, authenticity, joy, love, modeling prayer, breaking open the Word of God, skits, fun activities, dynamic small groups, praise and worship.
It was an awesome and uplifting experience! 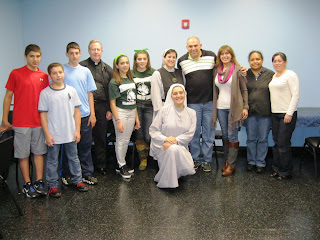 Our Lady of Purgatory MYO along with their pastor, Fr. Jack Morrison and the Sisters enjoyed lazer tag in Fall River on Friday Oct 19.  We had an evening of fun and community building as we played two laser games and then had pizza. 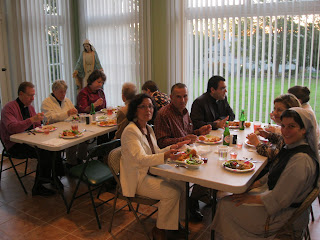 On Sunday October 21 our Ramsho & Supper evening at the convent was joined by lovely group from various parishes, including two priests Fr. Jack Morrison and Fr. Hicham Chemali, S.J.. Our next Ramsho evening is Sunday November 11 at 5:00PM. RSVP call 508/996-1753 or email sister@maroniteservants.org  by Friday November 9 if you would like to attend. 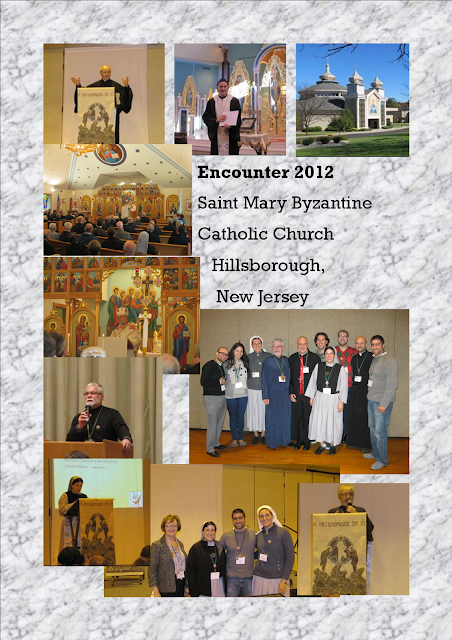 We attended the Eastern Catholic Churches Encounter 2012  last weekend October 11-14 at St. Mary’s Byzantine Catholic Church in Hillsborough, New Jersey. The theme of the conference was “Together In Christ”. Clergy and the laity from the Armenian, Chaldean, Malankar, Malabar, Maronite, Melkite, Romanian, Russian, Ruthenian, Syriac and Ukrainian Churches were invited to attend and approximately 80 priest and 200 lay people were present.
Dynamic speakers included Bishop Nicholas Samra (Melkite Bishop of the U.S.), Fr. Damien Geiger (Melkite pastor, Florida), Bishop Peter Anthony Libasci (Bishop of Manchester, New Hampshire), Maureen Daddona, PH.D and Sr. Marla Marie, who spoke on the Blue print for Church Growth. Sister Marla Marie  emphasized the importance of deepening our prayer life and personal desire for holiness, in order to become effective witnesses of Jesus Christ especially in this Year of Faith.
His Excellency Bishop Gregory Mansour also attended the conference and beautifully led Safro (morning prayer) for the clergy and lay faithful. We also befriended a group of vibrant and active Melkite young adults pictured in the photo collage. It was a successful event and a great opportunity for us to deepen our ties with one another, witness to the beauty of our faith traditions and come together as one body in Christ.
Email ThisBlogThis!Share to TwitterShare to FacebookShare to Pinterest
Labels: Eastern Churches, evangelization 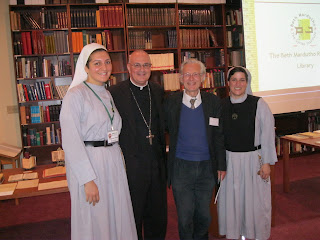 We attended the dedication of the Rutgers University  "Beth Mardutho Research Library: The Syriac Institute on October 15, 2012.  During this event, Doctor Sebastian Brock, the world-known Syriac scholar, gave a presentation. 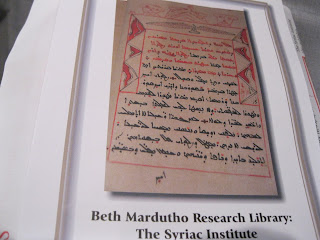 "The Christian must not be lukewarm. Revelation tells us that this is the greatest danger for a Christian: not that he says no, but a very tepid yes. This tepidness really discredits Christianity. Faith must become in us the flame of love, flame that really ignites my being, becomes the great passion of my being, and so ignites my neighbor. This is the way of evangelization...that truth becomes charity in me and charity like fire ignites my neighbor." (Pope Benedict XVI, Opening Remarks, Synod of Bishops on the New Evangelization)
Email ThisBlogThis!Share to TwitterShare to FacebookShare to Pinterest October 11, 2012 - November 24, 2013
the 50th anniversary of the opening of the Second Vatican Council and the 20th anniversary of the promulgation of the Catechism of the Catholic Church.
Likewise, the opening of the Year of Faith coincides with the General Assembly of the Synod of Bishops, held this month, with the theme of The New Evangelization for the Transmission of the Christian Faith.
Read more about this holy year in our Church, and enter into the call to renew your faith in Christ.
Email ThisBlogThis!Share to TwitterShare to FacebookShare to Pinterest 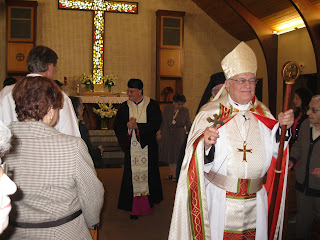 On Sunday 7th October we attended St. Anthony of the Desert’s 100+ Anniversary Divine Liturgy and reception. In addition, to this commemorative event we celebrated Chorbishop Joseph Kaddo’s 40th Anniversary to the priesthood. It was a beautiful gathering and tribute to Chorbishop Kaddo and the hard-working parish community of St. Anthony of the Desert. 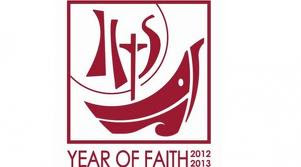 Brother Priests, Deacons and Subdeacons, Religious Men and Women, Seminarians, Lay Faithful, Brothers and Sisters in Christ:
The Year of Faith proclaimed by the Holy Father, Pope Benedict XVI, will begin October 11, 2012, and it could not come at a better time for our world. On the one hand in the Middle East, we have a religious fanaticism that threatens every peace-loving believer by a misguided sense of what God asks of us. On the other hand, in the West there is what the Holy Father calls a “crisis of faith” that makes even the best of believers question whether or not anything is objectively true. Thus everything seems to be “negotiable”, even to the point of thinking that we, not God, decide what is true and what has value.
This year in the United States we mark 40 years since Roe vs. Wade, which has made abortion a “right” throughout all nine months of pregnancy. We sadly note that assisted suicide is now on the ballot for Massachusetts. Marriage has been redefined in some states. The Federal Government has imposed “health” mandates, which, contrary to being healthy, impose on our consciences to do that which we firmly believe is wrong. Catholic institutions and faithful are faced with legal penalties if they do not accept this or other government decisions.
Somewhere between the misguided religious fanaticism of the Middle East, and the misguided secular fanaticism of the West, we Catholics must now know our faith better than ever, and live and pass on this faith, in all its splendor and beauty, to our children.
Our Holy Father’s recent visit to Lebanon brought the beauty of our Catholic faith into sharp contrast with what the world has to offer. For in between a world plagued by violence, division and hatred, and a world depressed by apathy, where nothing is true and good in and of itself, we Maronite Catholics find ourselves with a renewed mission and purpose for our weary world.
Dear brothers and sisters, only true, sincere, and reasonable faith, can save and guide us on the right path. Our marriages, our families, our engagement with society, our personal well being and happiness all need this faith in God.
It is my sincere hope that each one of us will find a way to renew our faith, rekindle its flame, water its seeds, planted so long ago by our ancestors, love and live this faith vibrantly within our Maronite Church with all the love of our hearts.
With prayerful best wishes, I remain
Sincerely yours in Christ, +Gregory John Mansour
Email ThisBlogThis!Share to TwitterShare to FacebookShare to Pinterest 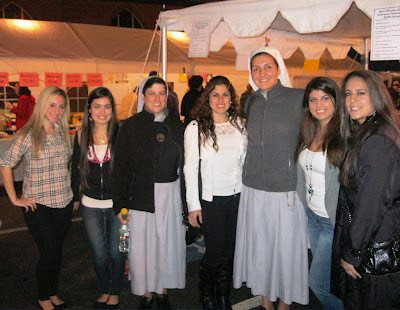 We attended St. Theresa’s parish festival in Brockton last weekend September 29-30. Despite the rainy weather it did not deter the people, young and old, from enjoying a fun community event! We are pictured at the festival with our beautiful friends from Our Lady of the Cedars Church, Jamaica Plain. A special thanks to Abouna Tony Mouanes and to all the parishioners for their gracious hospitality and hard work.
Email ThisBlogThis!Share to TwitterShare to FacebookShare to Pinterest
Newer Posts Older Posts Home
Subscribe to: Posts (Atom)