Feast of St. Michael the Archangel

The following homily was delivered by Fr. Herbert Nicholls on September 6 at the Mother of Light Convent.
It cannot be disputed that apocryphal literature prevalent in both Palestine and the communities of the Diaspora wrote of Michael, the Archangel. We might start with the 12th and 13th chapters of the Book of Daniel. Here he is described as the special protector of Israel, who at the given time will rise up and stand for the children of God (cf. Dan 12:1).
In the Book of Henoch, considered the most important and influential of Old Testament apocryphal, he is described as the chief of the angels appointed to guard the chosen race who are the inheritors of the promises. Michael is envisioned as ushering Henoch himself into the divine presence. He is associated with three other great archangels.
There is Gabriel, messenger of the Lord, who in Daniel 8 is sent to Daniel to assist in his interpretation of dreams. There is Raphael, who appears in the Book of Tobit to grant healing of sight and of a curse. A fourth archangel is mentioned, named Phanuel, meaning the face of God; or in the East Uriel, the Light of God. Neither have any biblical reference.
Nonetheless Tradition tells us that these angels along with a fifth named Lucifer, Bearer of Light, were created by God and they were good. Lucifer ushered in rebellion and was swept from the heavens with a third of the angelic hosts. Jesus said: I saw them cast down from the heavens and fall from the sky to the earth like lightening.
Notice that with the exception of Lucifer, all of their names end with the suffix el which is translated “of God”. Their function is to cover the four compass points (NSEW) protecting humanity from the invaders. They speak to us and remind us of what constitutes true being, of what in our life is so often concealed and buried.
They bring man into himself, into his/her spirit, touching him/her with the love of God, prompting us to always respond to that grace of being “angels’ (messengers) to one another, messengers who turn people away from their erroneous ways and direct them ever forward to God.
In the New Testament, Jesus first speaks of angels when meeting the future disciple, Nathaniel (Jn 1: 45 – 51). Later, while praying and fasting in the desert for 40 days. Once again during his final agony, Jesus calls to mind the prayer of the psalmist: God will put His angels in charge over you to protect you wherever you go. They will keep you from hurting your feet against the stones (ps 91).
This is the famous quote which Satan quotes to Jesus in the desert temptations. Prove that you are God’s Son, throw yourself down off this mountain and see if the angels come and rescue you. Jesus responds: Do not put the Lord God to the test.
As Jesus had to rebuke the temptations of Satan in the desert against pride and self-exaltation, so too must we be on guard against the trap of personal vanities and self-righteousness. In 1 Peter we read: Your enemy the devil prowls like a roaring lion, seeking someone to devour. Be alert! Be watchful! Be firm in your faith and resist!
In the seldom referenced Epistle of St. Jude we read: Remember the angels who did not stay within the proper limits of their authority but abandoned their heavenly dwelling places. They are bound with eternal chains in the darkness below, where God is keeping them for the great day on which they will be condemned.
When the last days come, people will make fun of you. People who follow their own godless desires. There are people who cause divisions, who are controlled by their own natural desires of the flesh. They do not have the Spirit….but you must continue to build yourselves upon your utmost sacred faith. Pray in the power of the Holy Spirit. Keep yourself in the love of God. Show mercy to those who have doubts. And save others by snatching them out of the fire.
Now what may seem a total jump from religion to politics is not as dichotomized as one would make it. Pope Leo XIII was elected in 1878. He has become known in ecclestical and secular history as the advocate for social reform. Of his many encyclicals the classic is Rerum Novarum, in which he acknowledges the right of every person to inviolable dignity.
But there was in the beginning of the 20th century, a strong assault upon the Church by Marxist ideology, not only in Russia, but predominately in Mexico, which features prominently in my assessment of the definition of catholic social teaching.
It was during this dark and difficult time that Pope Leo experienced a vision of battle between St.Michael and Satan. Whether or not he was actually dictated the words of this prayer, he ordered it circulated and prayed it at the end of every Mass in the Roman Rite:
St. Michael the Archangel, defend us in battle. Be our defense against the wickedness and snares of the Devil. May God rebuke him, we humbly pray, and do thou, O Prince of the heavenly hosts, by the power of God, thrust into hell Satan, and all the evil spirits, who prowl about the world seeking the ruin of souls. Amen.

Our Lady of Fatima – Pleasantville, NJ 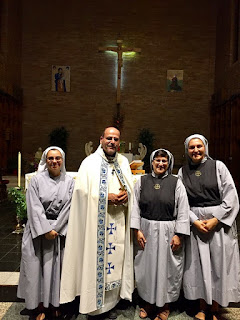 During the weekend of September 15 – 17, the Maronite Servants of Christ the Light were on mission at Our Lady Star of the East parish in Pleasantville, NJ. We were invited by Pastor, Fr. Kamil El-Choufeiti, to give a parish-wide retreat on the message of Our Lady of Fatima in this Centennial Year. 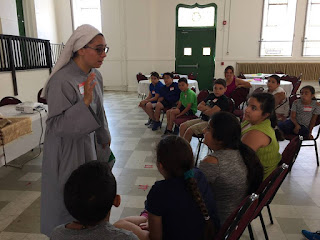 Our retreat began on Saturday morning with the children of the parish from 10AM to 1PM. The morning included a variety of catechesis, games, relays, crafts and activities as the sisters explained the Fatima message, and encouraged the children to pray the rosary daily. 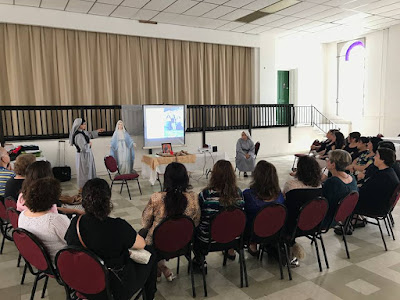 We were then able to visit some of the sick and homebound of the parish before facilitating a retreat for the MYO of the parish from 3.30PM to 6.30PM. The MYO served in the Divine Liturgy at 6.30PM, at which time Mother Marla Marie gave a witness and presentation on vocations and our Maronite Servants mission. Mother Marla Marie also spoke on the same topic at Sunday morning’s Divine Liturgy.

In the evening from 7.30PM to 10.30PM, we delivered a  presentation on the Fatima message to the MYA of the parish, which included a recreational evening with an outing for ice cream.

On Sunday morning following Divine Liturgy and the coffee hour, we presented on the Living Fatima message to the ladies of the parish. This presentation was bi-lingual in English with Sr. Natalie Sayde translating in Arabic. The message of Our Lady of Fatima touched them deeply and made the recitation of the Living Rosary more meaningful.  The ladies, each in turn, entrusted their burdens to the Immaculate Heart of Mary.

We thoroughly enjoyed our weekend with the parish family of Our Lady Star of the East. We thank Abouna Kamil and the parishioners for their warm welcome, hospitality and support of our mission.

Feast of the Exaltation of the Holy Cross

The following homily was preached by Deacon Donald Massoud on Sunday, September 10 at St. Anthony of the Desert Maronite Church in Fall River, MA. 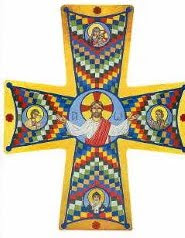 St. Paul tells us that the Cross is foolishness and a stumbling block to some, but to us who believe it is the sign of salvation (cf. 1 Cor 1: 18 – 15). It is beyond the logic of some who consider their wisdom and knowledge equal to God to understand that Christ had to die for our sins in order to provide us with the hope of salvation.

In today’s Gospel (Jn 12: 20 -32), Jesus says, “whoever loves his life will lose it, and whoever hates his life in this world will preserve it for eternity”. He goes on to say, Whoever serves me must follow me, and where I am, there also will my servant be. The Father will honor whoever serves me.

The phrase to “to lose one’s life” means to die; so Christ is calling us to come and die. He is not calling us to improve our earthly lives in comfort and wealth, but to let go of everything and discover authentic life – life in Christ Jesus.

The death to which we are called may not be the death of our bodies but the death of our old selves and coming alive into Christ’s way of living. It may be the death of our ways of thinking and wanting that do not reflect the life of Christ. In his letter to the Romans, St. Paul tells us, “Do not be conformed to this world, but be transformed by the renewing of your minds, so that you may discern the will of God” (cf Rom 12:2).

Many of us long to have good things in life, knowing full well that they can neither satisfy nor really give life in all its fullness. Christ calls us to stay with the struggle and trust that true life comes from Him. The world’s vision is captured in words like: buy, shop, have, eat, acquire, accumulate, consume. But Jesus asks, What profit would there be for one to gain the whole world and forfeit his life? (Mt 16: 26).

We are watching the terrible devastation in Florida. The governor was begging the people to obey the direction to evacuate. He told them, “we can help you restore your houses, but we cannot restore your lives”. The horror and sadness of those people who have lost not only all their material goods but also those of sentimental value has been very difficult to watch.

However, transformed into the mind of Christ, those words of acquisition are replaced by words like, “offer, serve, feed, and give”. Those who want to save their lives will lose it. Christ promises, “and those who lose their lives for My sake will find it”. Life is found in giving and serving because these actions best reflect God’s image in our lives.

This runs against the voices that want us to acquire, to hold on to, voices that are sometimes so overwhelming that they are hard to ignore. This was demonstrated clearly in the hurricane reporting. After watching cars jammed up on highways or waiting in line for gasoline and people huddled in shelters, we have a commercial telling us which car to buy, where to go on our next cruise, and how to stay well groomed and well dressed.

Christ’s invitation to us is for us to let go of our need to get, buy, keep, and accumulate and embrace the desire to give, feed and serve. It is also His promise to us for eternal life.