When Jesus Knocks, Be Not Afraid! Let Him In! 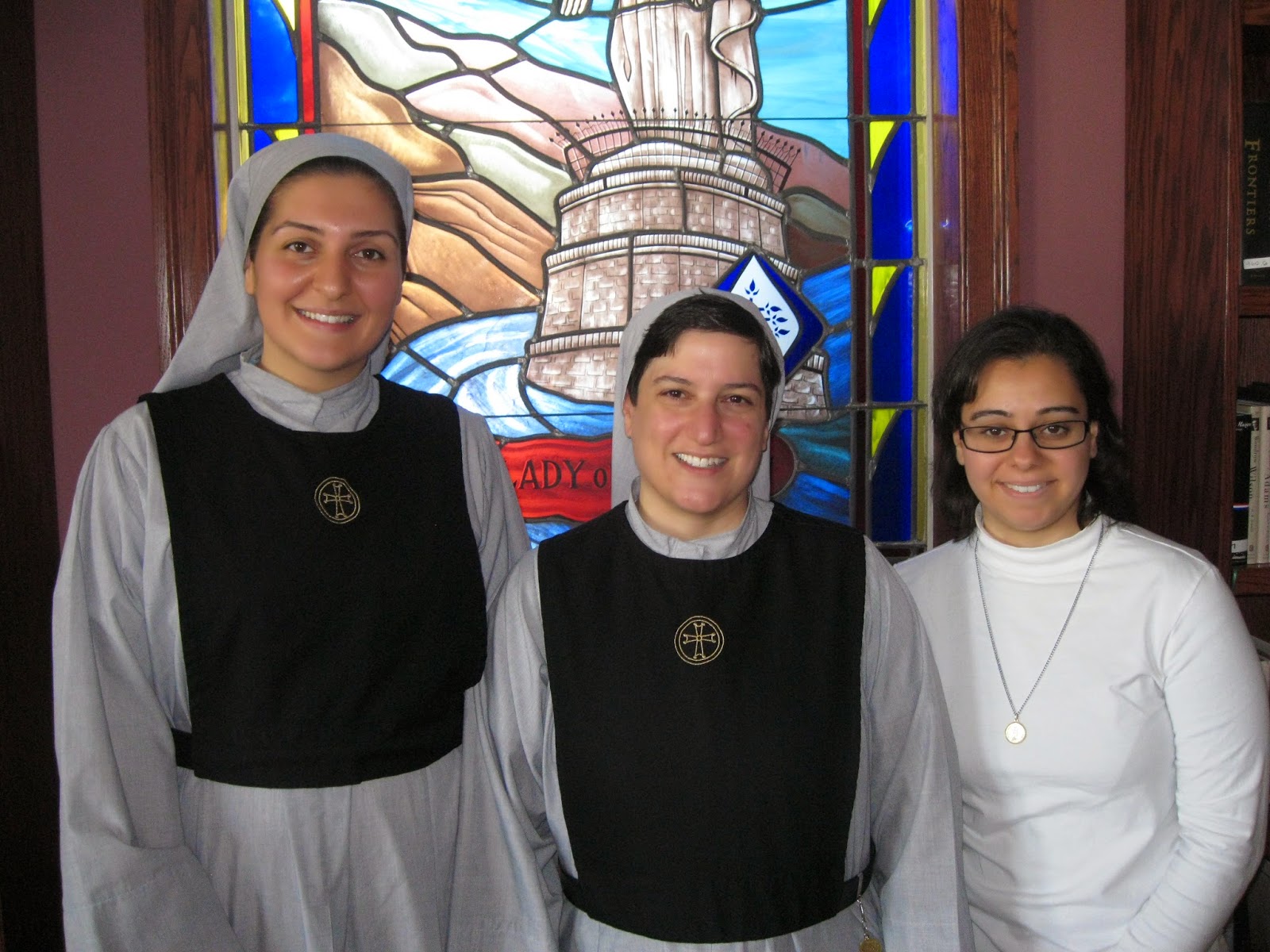 I thought it would be nice for me to share my personal conversion and vocation story with you.  Since joining the Maronite Servants of Christ the Light in January 2014, I have been asked by many people, “so what is a girl from Sydney, Australia doing in Dartmouth, Massachusetts? You’re a long way from home.”
This is true, I am a long way from home (and my Aussie accent gives me away every time), but Jesus’ Sacred Heart is the real home, and my following testimony will tell you why.

I originally discerned religious life when I was in high school and was just fourteen years old. I used to dream of the day that I would enter the convent. My discernment continued and at sixteen, I asked a community of nuns in Sydney to accept me as a postulant. My request was turned down because I was too young, but at the time, it was a huge blow that was hard for me to accept. However, God had other plans because he tends to write straight with crooked lines!

To be honest, I lost interest in pursuing a vocation to consecrated religious life. I immersed myself in my studies, and I found to my surprise that I loved academia, and gradually came to be consumed by it. I went on to University where I studied Economics and Political Science, with hopes of one day having a political career. Thoughts of a religious vocation were long gone, or so I thought.

After my studies, I got an excellent job with our third tier of Government in Australia, Local Government in the Industrial Relations Unit. I spent six years working my way up the ranks. I found that the more and more I progressed at work, the less happy I became. Indeed, if I could sum up my feelings back then, I would say that I felt empty and very much alone.
I had a gaping void in my heart, which I was filling with all kinds of worldly distractions such as nice clothes, and dining out. I even bought my very own home, hoping that this might solve the problem! I often wonder what God was thinking when he was allowing me to pursue these earthly objects. I often picture Him shaking His head at me in disapproval. But No, he was waiting for the right time to tap me, his daughter, on the shoulder with the utmost mercy and compassion, and remind me that only he can fill the void in my life. And this is precisely what Our Lord did.

I recall vividly back in January 2013, kneeling down in prayer and imploring the intercession of St. Rita of Cassia, the patroness of impossible cases, petitioning her to take away my feelings of emptiness and loneliness. I remember telling her that I felt guilty asking for something more, when I had so much already, but I said to her that something was missing, and I didn’t quite know what. I asked God through her intercession to send me what was missing. So what was missing? It was Jesus.

Shortly after that I had some very powerful stirrings of the heart towards Our Lord Jesus. I had always gone to Mass every Sunday, but I found myself constantly preoccupied by him. All of the sudden he was there in every thought, in every word, in every prayer; he was there in everything and everyone I encountered. These feelings of longing for God, of longing to be near him, close to him, beside him, surrounded by him cannot be fabricated, no matter how hard you try. This was God’s call, he was beckoning me to come, to leave all for his sake. At the time these feelings stirred, I was left utterly confused, not really knowing what was happening to me.

When Mother Marla Marie and Sr. Therese Maria were on mission in Sydney back in February 2013, I remember hearing them speak about how they discerned their call to religious life at one of our youth group meetings at my parish of St. Charbel’s. After they had finished speaking, something penetrated deep within me and struck a chord, perhaps because I was experiencing something similar to them.

I knew that Mother Marla Marie and Sr. Therese Maria were speaking again on the Voice of Charity Radio Station. So I tuned in to hear and my old feelings of wanting to enter consecrated religious life stirred again with renewed fervor. I came to realize that the Holy Spirit was gently leading me towards the Maronite Servants, by planting a seed of yearning in my heart.

The Holy Spirit gave me the courage to email Mother Marla Marie only two short days later and explain to her what I was experiencing. I met her and Sr. Therese Maria at my parish on the eve of their departure to the U.S. I recall speaking to Mother Marla Marie that evening and finding peace at last.

A vocation, whether it is to the married state or religious life, is fundamentally a gift from God. In the words of St. Gianna Beretta Molla, “Our concern then should be to know the will of God. We should enter onto the path that God wills for us, not by “forcing the door”, but when God wills and as God wills…”

My message is to all the young women who are searching for goodness, happiness, truth and beauty. I was searching for it too, but I was looking in the wrong place. The world can’t give you lasting joy, but that’s the first place we all look for it. Stop looking for it there because you won’t find it there! “Whom else have I in the heavens? None besides you delights me on earth” (Psalm 73: 25).

For those interested in discerning religious life with the Maronite Servants of Christ the Light, please contact Mother Marla Marie at sister@maroniteservants.org.

Do you have a Maronite Servants’ heart Do you have a Maronite Servants’ heart?
The Maronite Servants of Christ the Light invite young women to consider a vocation to the consecrated life.  Here are some qualities that may show signs of a call to the Maronite Servants’ way of life:
·       Personal relationship with God in prayer
·       Thirst for a deeper knowledge of the Maronite Catholic faith
·       Devotion to the Holy Eucharist
·       Generosity and concern for others
·       Desire to live a good and holy life
·       Love for the Church and her teachings
·       Capacity and desire for spiritual motherhood
·       Capacity for friendship and communal living
·       Love for the poor and defenseless
·       Healthy self-image and normal social skills
If you are considering a call to religious life, it is beneficial for you to begin living these steps:
·       Stay close to the Mysteries (sacraments). Participate in Divine Liturgy every Sunday, and daily when possible. Confess your sins to a priest regularly-once a month or even more.
·       Get a spiritual director. Ask a priest or sister to meet with you once a month to discuss your spiritual life.
·       Pray everyday. With the help of your spiritual director, develop a prayer routine.
·       Do some spiritual reading daily.
·       Stay close to Our Lady. The Mother of God will not let you down!
·       Serve your parish. Seek opportunities to get involved in parish life.
·       contact with Sister Marla Marie at sister@maroniteservants.org.

Vocation Prayer
We therefore implore you, O Christ, guard your Church as one flock, under one pastor. Call to your service the young men and women chosen by you. Deepen the love of those you have called for the religious life and help them to become more perfect in following your precepts. May those whom you have chosen, hear your call to the works of evangelization. May your Church be an instrument of sanctification and salvation; let her increase according to your plan, and grow to full stature. Through her may we reach your kingdom, and glorify and praise you, forever. Amen.  (Prayer taken from the Maronite Divine Office)

On Friday, June 6 to Wednesday, 11 June, the Maronite Servants of Christ the Light were in Phoenix, Arizona for service and apostolic formation. 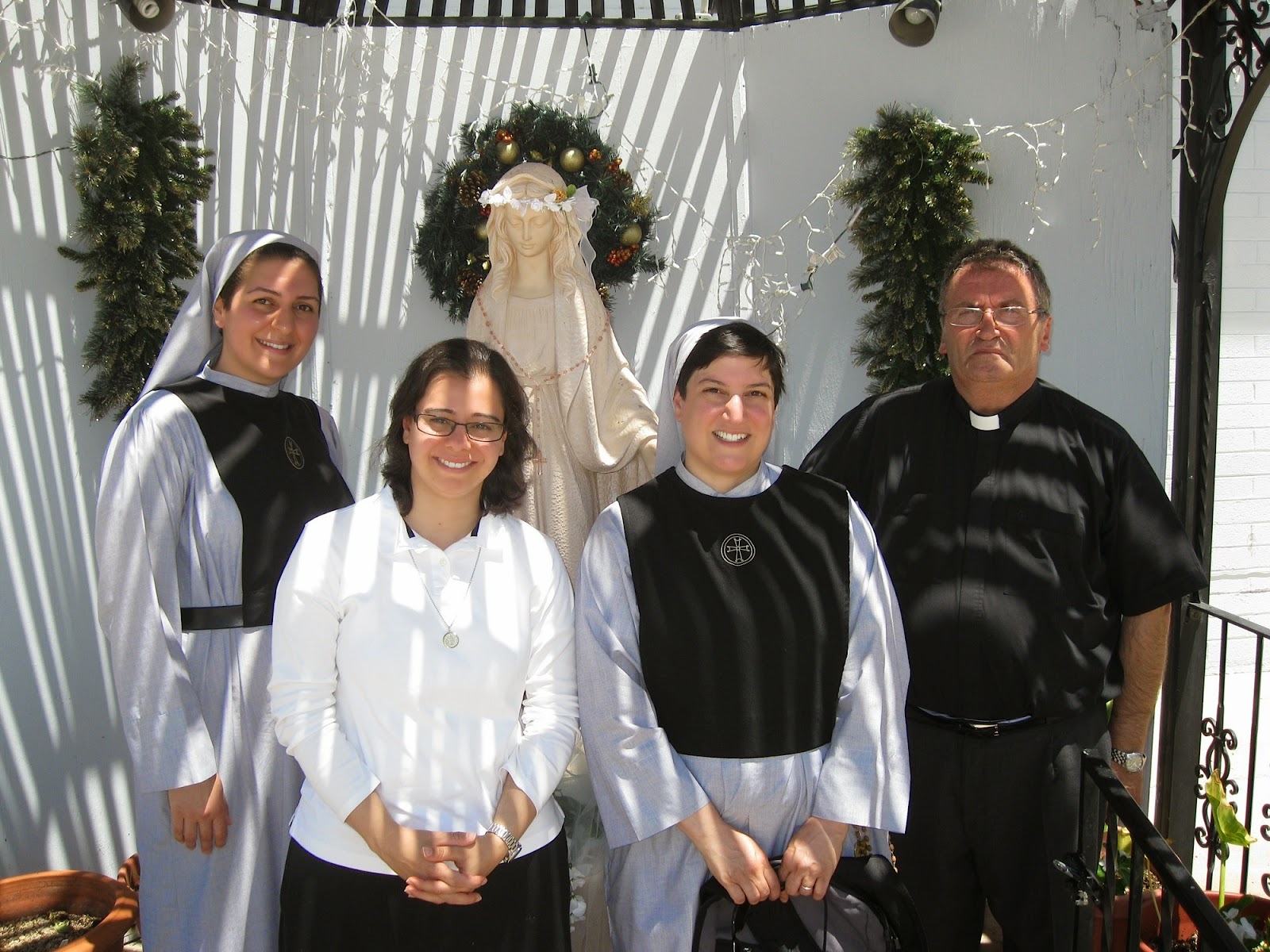 The weekend of June 7,  the Maronite Servants of Christ the Light greeted the parishioners of St. Joseph’s Maronite Church, with the support of Pastor, Father Ghattas Khoury. 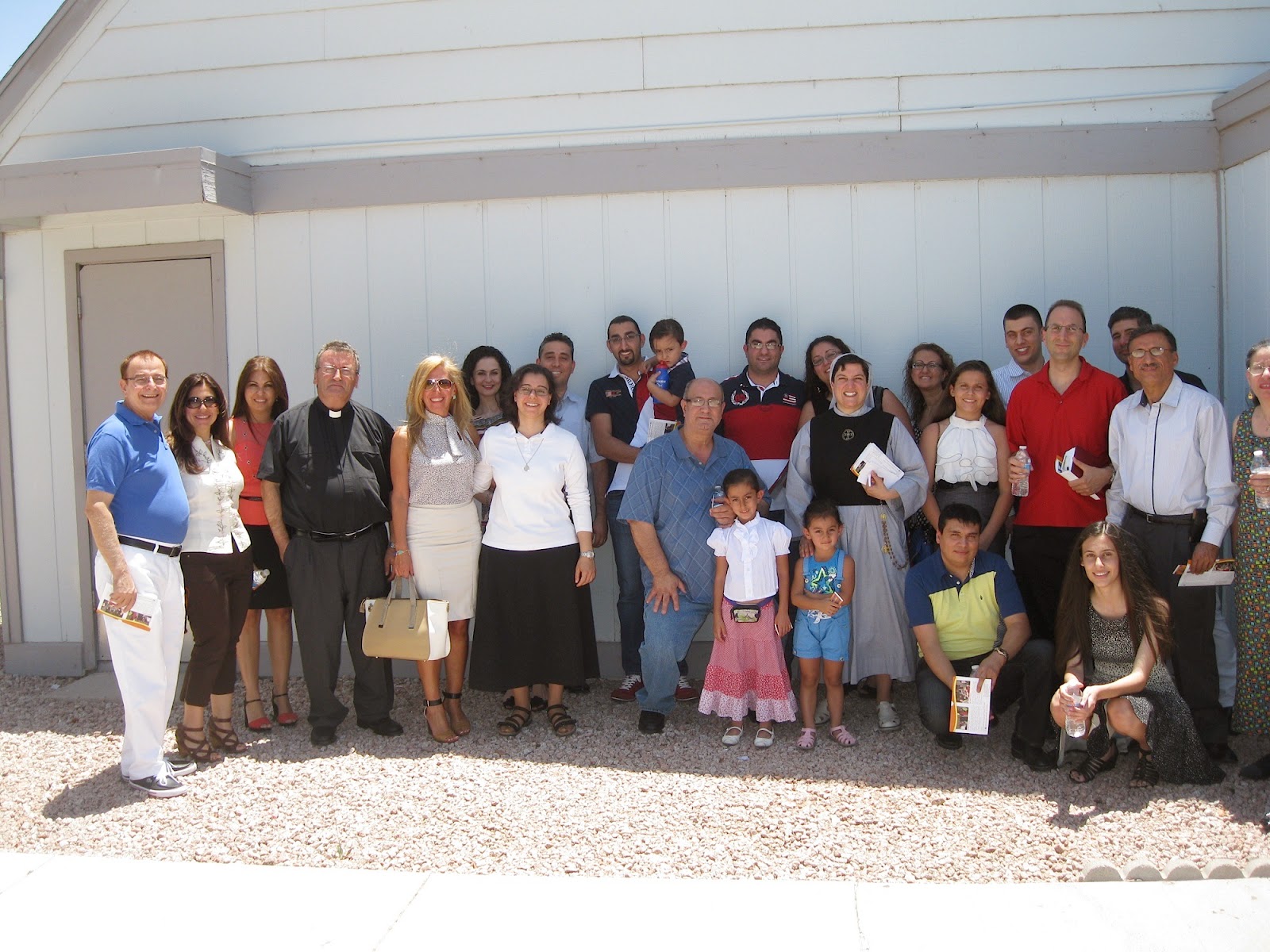 Both Liturgies were extra special as we commemorated the feast of Pentecost and rejoiced in the descent of the Holy Spirit on the Holy Apostles, with the Mother of God in their midst. We pray for all our Maronite people during this liturgical season of Pentecost that the Holy Spirit may inflame your hearts with divine love and new evangelical zeal. 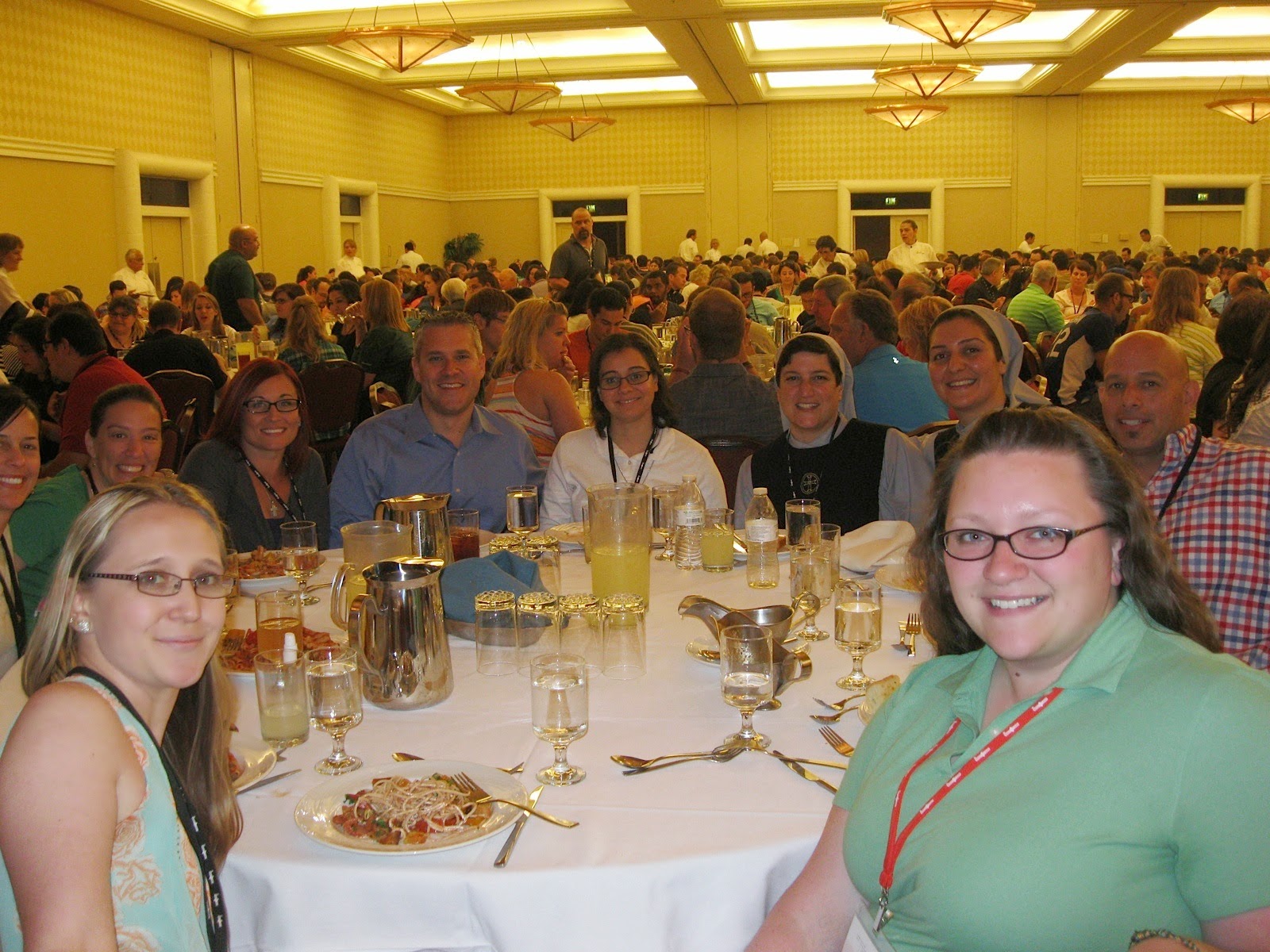 Beginning Sunday evening to Wednesday June 11, the Maronite Servants of Christ the Light attended the annual Life Teen Catholic Youth Ministry Training Convention along with over 700 youth ministers from around the U.S., including a vast number of priests and Bishops
The presentations included a key note speakers and theologians such as Dr. Scott Hahn, who spoke to us about the significance of the Eucharist as portrayed in Sacred Scripture.
The conference  was invaluable in our ongoing formation and development as we continue to minister to our Maronite youth. 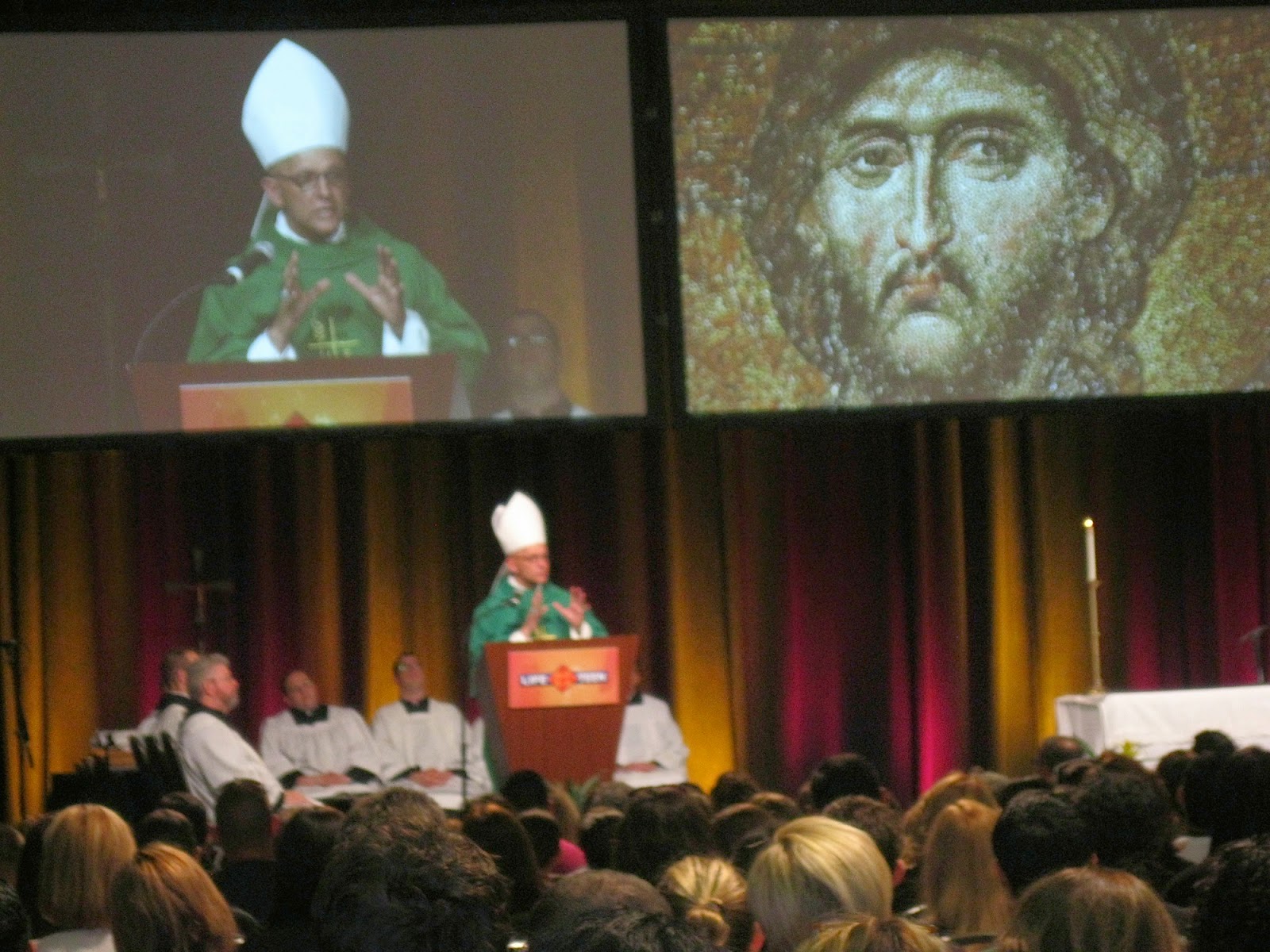 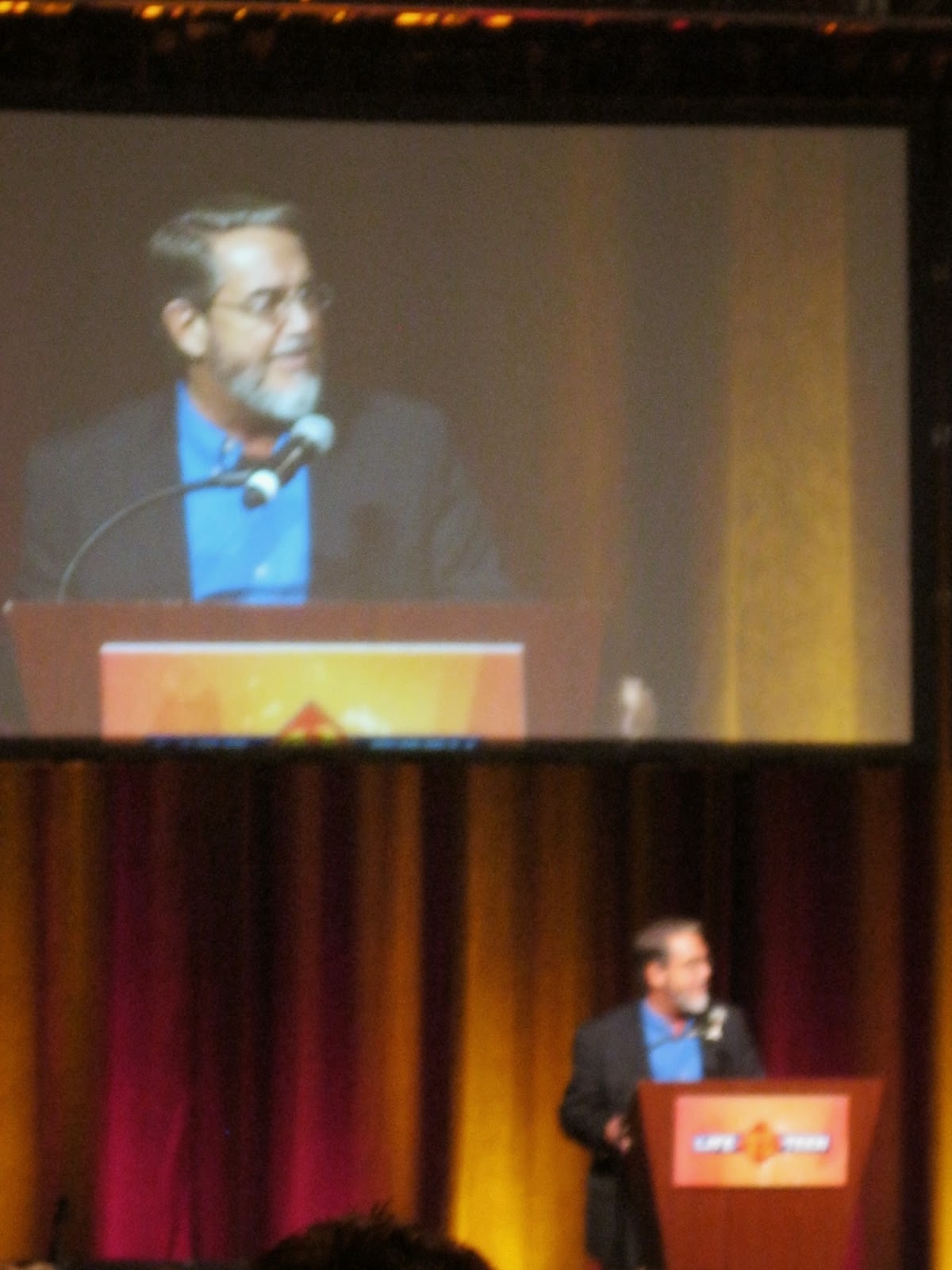 In addition to daily Liturgy, the conference also included time for prayer and adoration, and praise and worship. The conference gave us an opportunity to delve into hot topic issues the Church is grappling with in today’s world such as same-sex attraction, the atheist mentality and Theology of the Body. Our teens are often very curious to know the Church’s views on these issues. This conference has given the Maronite Servants of Christ the Light deeper insight and material to discuss with our teen and young adults groups. 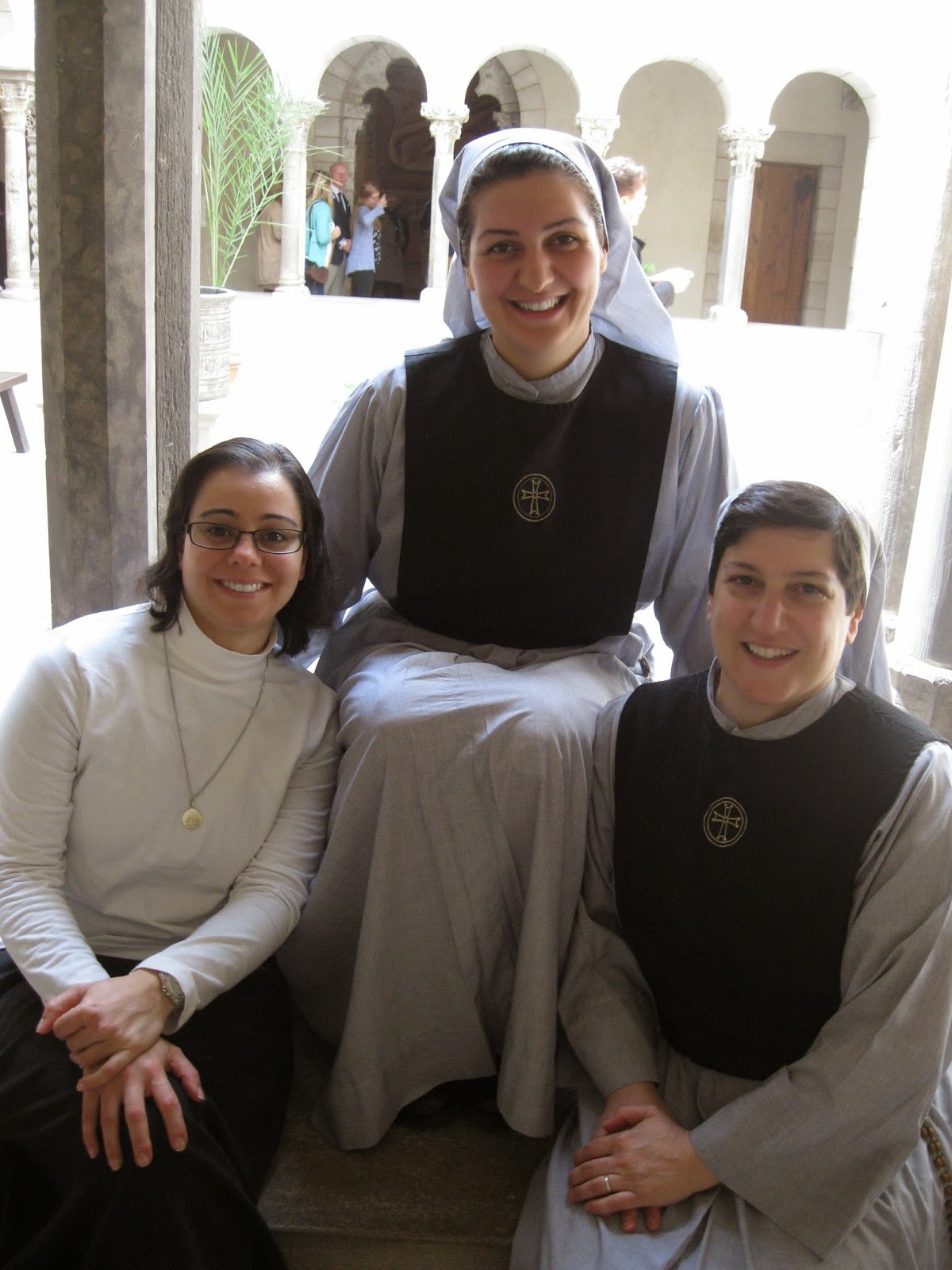 We Offer to Serve
How may we serve you and your parish on the journey of faith in our Maronite tradition?  As spiritual mothers serving alongside our priests, we are able to offer: parish retreats, day of prayer for a sodality or parish groups, an overnight retreat at the convent (women only), children’s faith formation day, summer vacation bible camp, MYO or MYA workshops or retreat days, catechist training workshop.  Please contact Sister Marla Marie to schedule or discuss further how the Maronite Servants may serve you.