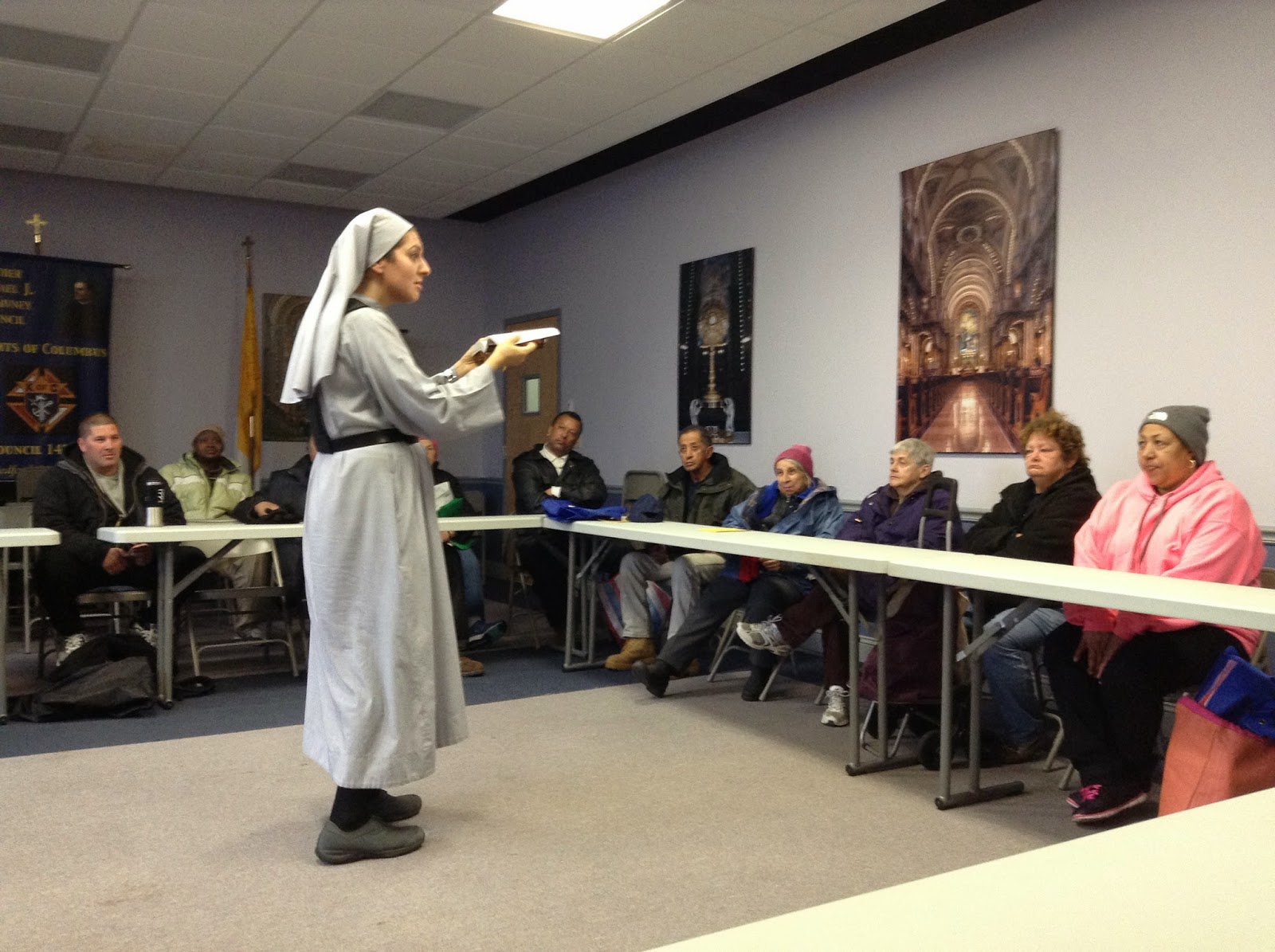 The Maronite Servants of Christ the Light have been facilitating and conducting weekly Bible sharing for the people that visit the Food Pantry at St. Anthony of Padua Roman Catholic Church in New Bedford, MA.  We were invited by the pastor, Fr. Edward Murphy to facilitate the sharing every Thursday. The participants are not only fed physically, but spiritually as well.   The sharing is focused on the daily Gospel readings, which have been from the Gospel of St. John during the Easter season.

The scripture is proclaimed and the participants are given time to think about how it applies to their lives through a guided meditation led by Sr. Therese Maria and then opened for sharing.  Our opportunity to serve in this spiritual work of mercy has been a blessing. Their sharing has been a source of hope and encouragement to all those present.   Please keep this work of mercy and those who attend in your prayers. 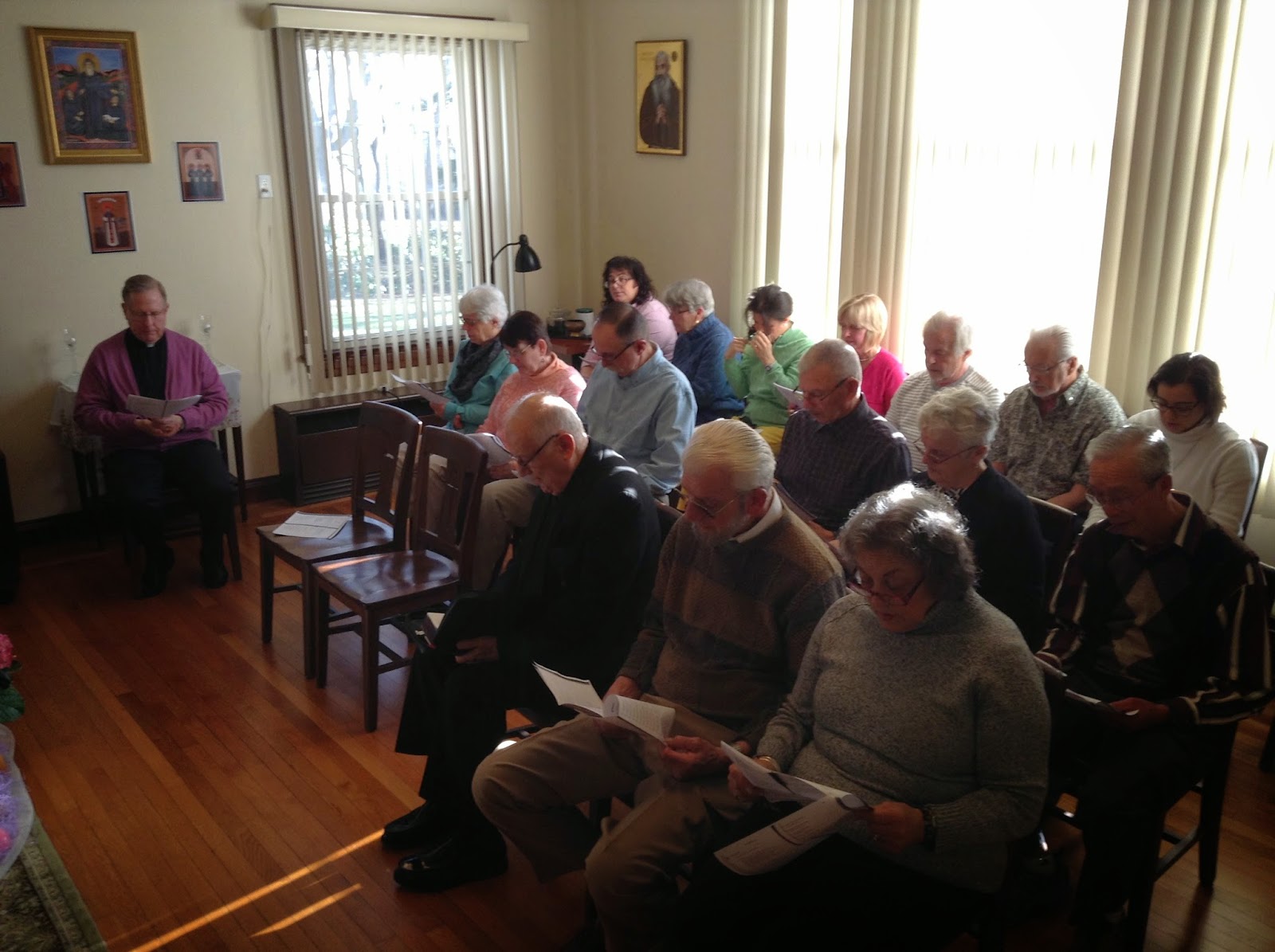 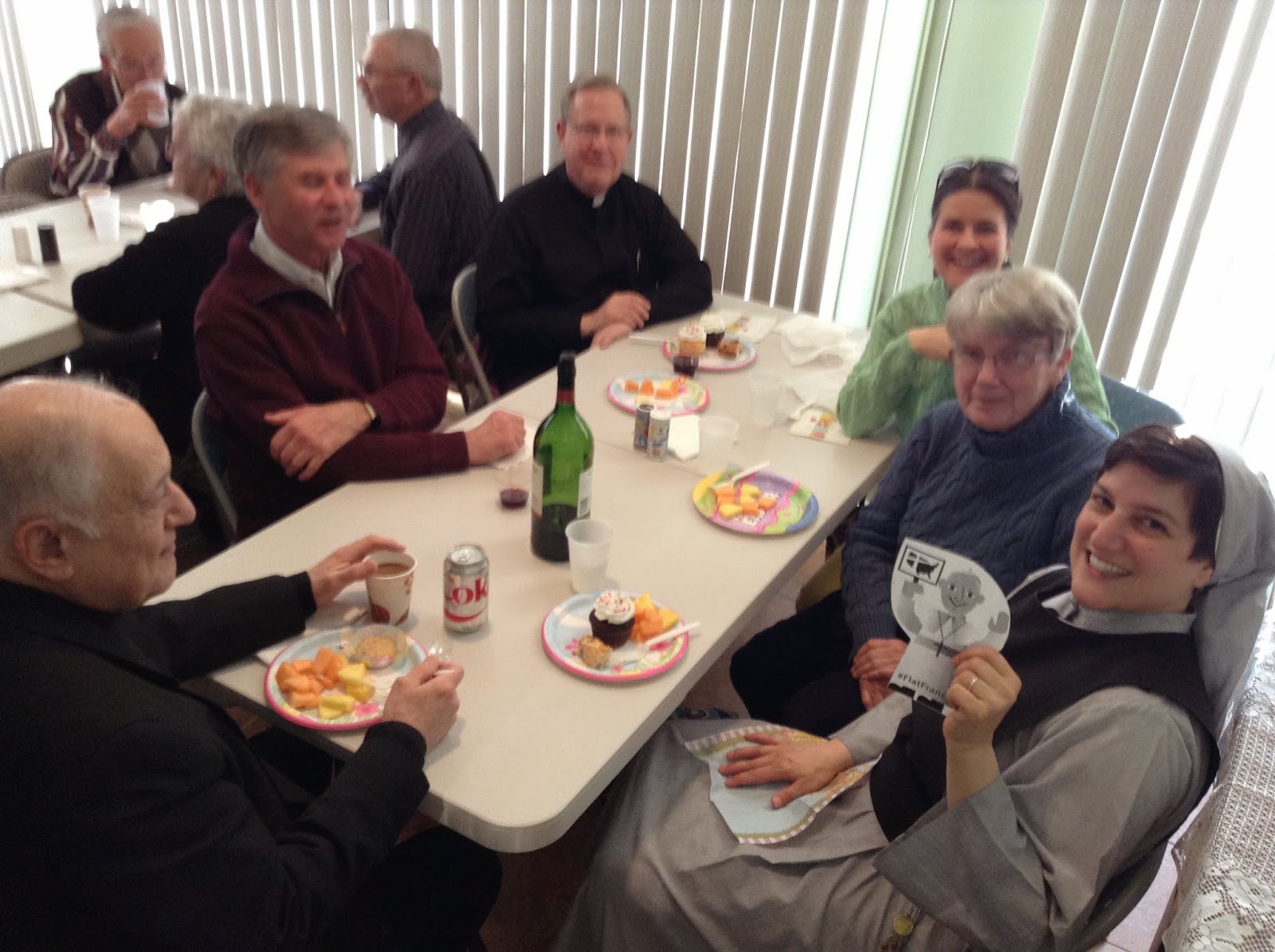 The Maronite Servants of Christ the Light hosted its monthly Ramsho Prayer and Supper on April 12 at the Mother of Light Convent inviting our wider Catholic community, many of whom are avid supporters, benefactors and volunteers to our mission from parishes here in Dartmouth, among them St. Julie Billiart and St. Mary’s. 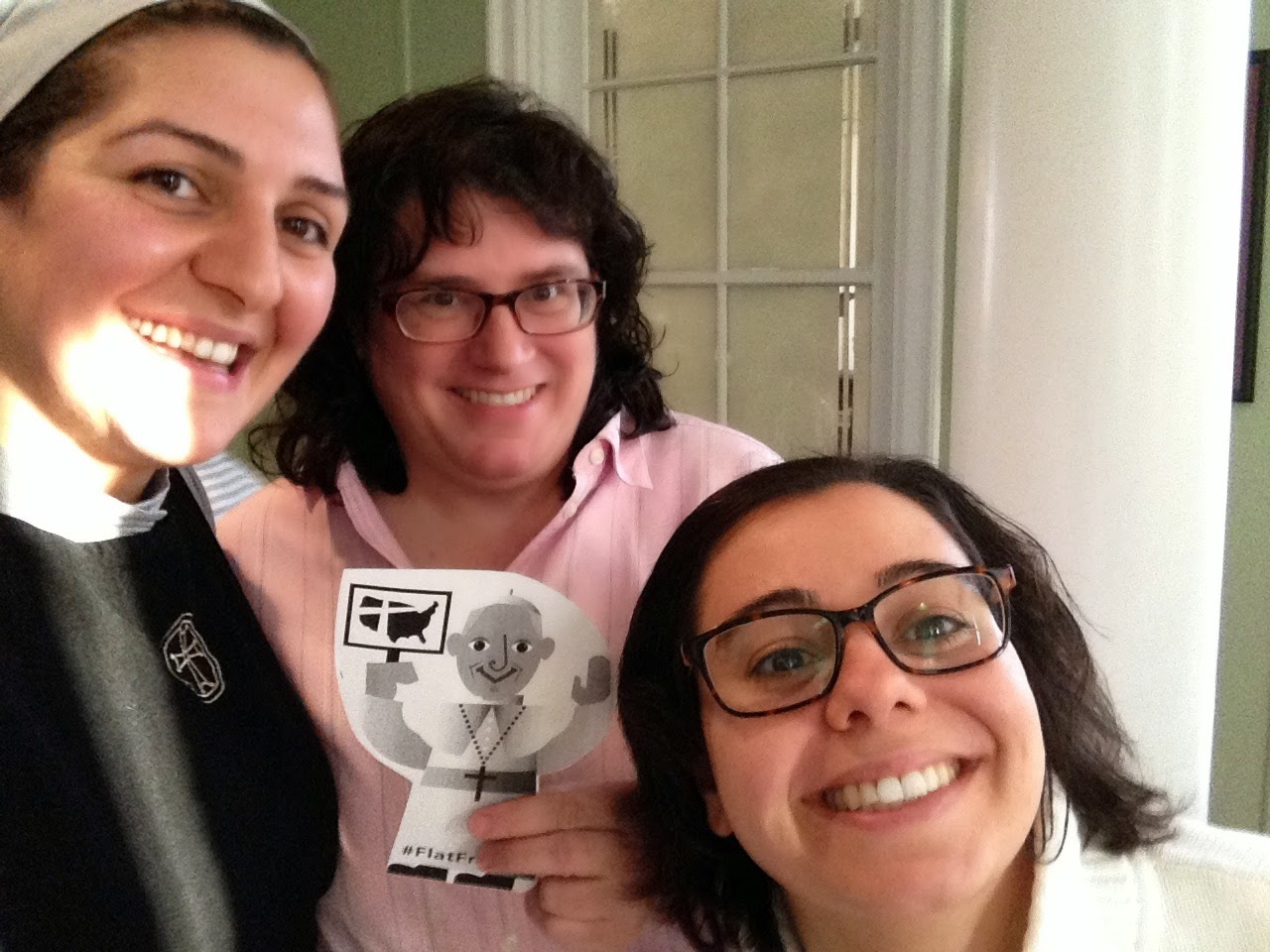 We shared our Maronite spirituality expressed so beautifully in our Evening Prayer (Ramsho), which is includes praying of the Psalms and the Hoosoyo, unique to our Syriac Tradition and central to our Maronite biblical interpretation.
Also joining us were several clergy, namely, Fr. Richard Roy, Pastor of St. Julie Billiart, Fr. Jack Morrison, Pastor of Our Lady of Purgatory Maronite Church and Chorbishop Joseph Kaddo, Pastor of St. Anthony of the Desert Maronite Church.

Opening the Eyes of Our Heart and Mind

Email ThisBlogThis!Share to TwitterShare to FacebookShare to Pinterest
Labels: reflection 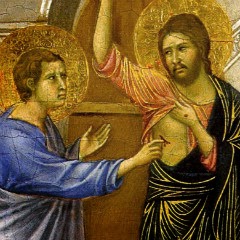 On Sunday, April 12, the Maronite Church commemorates ‘New Sunday’, which is the eighth day of the Church’s celebration of the Resurrection. Also, in the Roman Catholic calendar it is the feast of Divine Mercy.

The following is an explanation of the meaning of ‘New Sunday’ taken from the Maronite Divine Office.

“The first week of the Season of the Resurrection, the week of Hawareyeen, has come to a conclusion. During this week we have seen the various appearances of the Lord to Peter and Mary Magdalene, seven disciples at the sea of Tiberias, the two disciples on the road to Emmaus, and the disciples gathered together in the Upper Room. Now the appearances of the Lord are over. In overcoming the hesitation of Thomas, the Lord revealed to the Apostles the truth of the Resurrection. Christ has Risen, truly Risen!

New Sunday once and for all puts an end to the old way of looking at the Lord. He is no longer revealed in the flesh (as the disciples experienced Him during His life with them); nor in glory (as Thomas did). From now on, He is revealed in Spirit, through the experience of faith and in the Mysteries (Sacraments). Only in the Spirit is there a sharing in His Mystery of Redemption. His Word is crystal clear and resounds for all ages and generations:

‘You have come to believe because you saw me. Blessed are they


who have not seen and have believed’ (Jn 20:29).”
Email ThisBlogThis!Share to TwitterShare to FacebookShare to Pinterest
Labels: Maronite Identity

A Blessed and Glorious Feast of the Resurrection 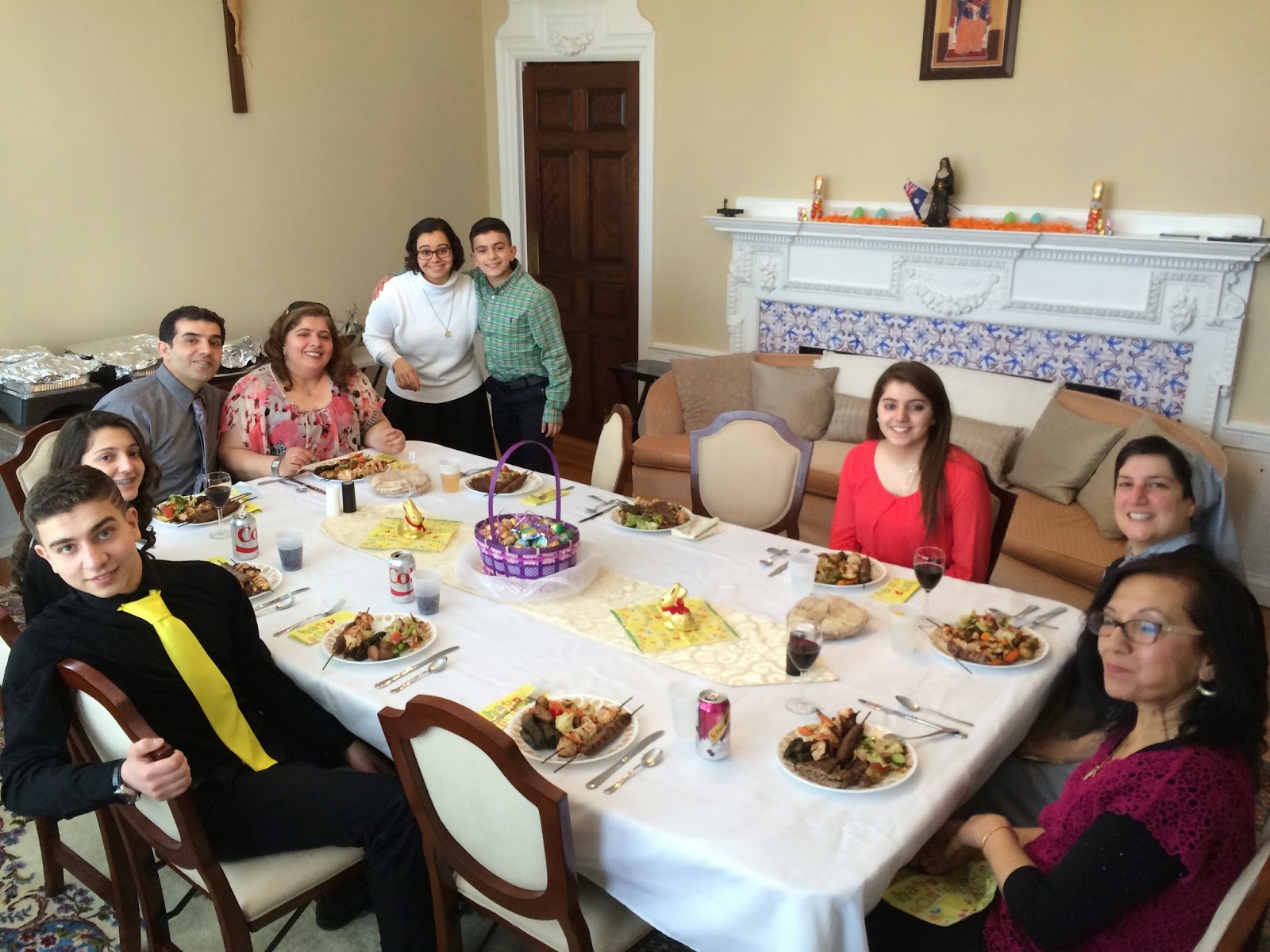 We wish our dear family and friends a joyous and blessed Easter in this Glorious Season of the Christ’s Resurrection. Be assured of our daily prayers. May the radiant light of Christ fill you and your families with great hope, peace and love. We are pictured at our convent celebrating an Easter Lunch with friends of our community, Therese Abouzeid and the Chedid family from Our Lady of Purgatory Church, New Bedford, M.A.

Explanation of Great Friday of the Crucifixion


The Church today celebrates the great and wondrous mystery of Christ’s death upon the cross. Jesus Christ is our new passover who gives us his body and blood as our spiritual food and drink. He replaces the bread and wine of the paschal meal with his very body and blood.
The paschal lamb of the old covenant he abolishes, and in its place he offers himself as both priest and victim and thus inaugurates the new covenant in his own blood.
As John the Baptist proclaims, he is truly “the Lamb of God who takes away the sins of the world.” And as St. Paul says, “Christ our passover has been sacrificed for us; therefore let us keep the feast.”
The Divine Mysteries are not celebrated today, instead the pre-sanctified liturgy of the Anaphora of the Signing of the Chalice is used. The prayers of this anaphora are among the most ancient of the Syriac Church. Holy Communion is distributed during the pre-sanctified liturgy from the Mysteries consecrated yesterday.
In addition to the celebration of the pre-sanctified liturgy the Church also recalls the mystery of the cross by the rite of adoration of the cross and the burial of the Lord.
The cross is the sign of the Lord’s sacrifice and death, and yet it is also the beacon of light and symbol of hope and victory.
The whole earth has been enlightened by the light of the cross, and the darkness of ignorance has been turned back.
As we adore the cross and recall the burial of the Lord we call out: O Lord, we worship your cross, for it is our resurrection and renewal.
O Christ crucified for us, have mercy on us.

HYMN
For us the Son of Man suffered and died hanging on a cross.
He sent his spirit to God, the Master of the universe.
The rocks split and the tombs opened;
the entire world was afflicted.
The heart poured water and blood for the life of mankind.
Cross of the Savior,
teach me of your power.
Help me to understand why everyone prostrates
before your majesty.
I became the altar at the summit of Golgotha.
On me the Son of almighty God was crucified.
From him flowed water and blood for the forgiveness of mankind.
The Church sings the glory of the cross for ever.

Maronite Icon: The CrucifixionThe Lord on the cross is dressed with the royal tunic, raising his head like a cub who sleeps with open eyes. His cross is erected on Adam's skull. His Mother looks at him and the Beloved One bows his head. The eclipsed sun and moon symbolize the cosmic presence in this parousia scene. This iconographical type was dominant to the ninth century.
Email ThisBlogThis!Share to TwitterShare to FacebookShare to Pinterest
Labels: Icon, Liturgy, Maronite Identity
Newer Posts Older Posts Home
Subscribe to: Posts (Atom)