Sundays of the Church & Season of the Birth of our Lord

(Taken from Faith of the Mountain- Monsignor Dominic Ashkar) 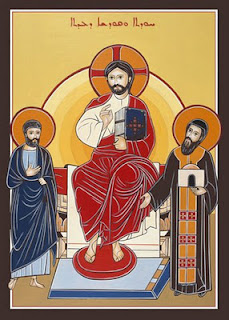 Our Christian worship is based on the Person of Christ, His Incarnation, Death and Resurrection. The purpose of this worship is to involve the faithful in the Mysteries of Christ, helping them to reflect upon them, shaping their lives according to the same pattern and at the same time, sanctifying the element of TIME.
The Church spreads the Mystery of Christ throughout the year. That is what we call the Liturgical Year. The Liturgical Year becomes educational, helping the believer to live the Mystery of Christ gradually. That is why we see the whole thirty-three years of Christ's life condensed into one year. 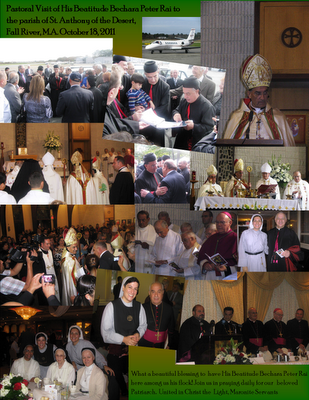 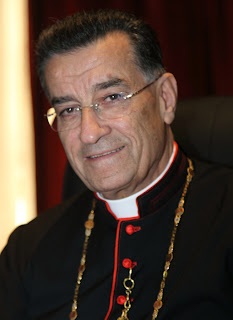 "The Maronite Catholic Church is led by an extraordinary man. Patriarch Bechara Peter Rai is a prayerful man, but does not hide behind prayer. He is a sincere man but is not shy in reaching out to others. He is “strong, loving and wise” as Saint Paul encourages his disciple Timothy to be. He is practical, intelligent, faithful and relies completely on God. He represents the best of what the Maronite Church, her prayer and way of life have to offer.
He is not a political man, nonetheless, he is unafraid of speaking the truth or to say what is not politically correct, as long as it is true and promotes “communion and love”. He has stood before the most powerful and has also been a friend to the lowly. He is as the Psalmist urges us to be: strong with the strong, meek with the humble, and astute with the crooked.
The Lebanon in which he lives is divided. It is not easy to describe these divisions as Christian/Muslim or Sunni/Shiite, the divisions seem more like political parties and/or personalities opposed to those who think differently. One might be able to describe it as “every man for himself”.
However, in the midst of this “winner takes all” mentality comes a father, a Patriarch, a man who prays and dreams of something greater.
I hope and pray that the Maronite Church throughout the world, as well as every citizen and friend of Lebanon will come to respect and love the wisdom of our Patriarch, and embrace his vision of a Maronite Church and a Lebanon in dialogue with others.
Please join me in welcoming His Beatitude, Bechara Peter Rai, Maronite Patriarch of Antioch and All the East."
+ Gregory J Mansour
Bishop of the Eparchy of Saint Maron of Brooklyn

See the Bishop's Blog for an Open Letter to President Obama which begins: "I am terribly disappointed with the rebuff of Patriarch Bechara Peter Rai who is the Catholic leader of the Maronites worldwide and one of the most respected Christian leaders in Lebanon and the Middle East. The motto of his coat of arms reflects his personality and is call for 'communion and love.'"

Formation of The Maronite Patriarchate 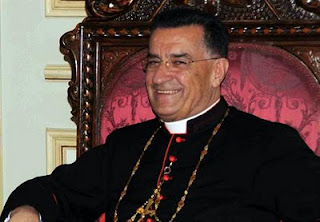 Here is a brief historical note on the patriarchate as we welcome our Maronite Patriarch, His Beatitude Bechara Peter Rai who began his inaugural US visit on Oct. 4 and will conclude on Oct. 23.  The Maronite Patriarch is the head of the largest Catholic patriarchal church.

Formation of The Maronite Patriarchate
This series from the “Faith of the Mountain” deals with the Maronite Patriarchate which means Glory-Asceticism-Testimony. It reveals and shows a way of life and recalls a glorious struggle and an uninterrupted testimony for Catholicity and human right values in the midst of the Middle Eastern religious plurality.
Maronity is Martyrdom
In fact the Maronite Patriarchate was a necessity during the darkness of a vacancy; it was in that time a martyrdom to replace the murdered Antiochene patriarch. While the others had run away, the Maronites were steadily ready to offer themselves.
The Patriarch is consecrated a Head, a Father, a Guide, and a Civilian Ruler; he is a Symbol of Unity, a “father and an example of our faith" in a biblical sense. If we recognize him as our Head, we will be faithful to our Ancestors’ will, we confess and foster our Unity, and we rescue our Church, as a distinguishing minority, from fusion in the melting-pot of this huge world.
The Apostolicity of The Antiochene See
The Incarnate Word of God arose within the context of the Roman political structure. By order of their Master, the Apostles pushed themselves forward to the cities where the civilized world of the Roman Empire was centered and it was quite natural that Antioch, “the Queen City of the East", should be the first center for Apostolic activities. This is proved by the fact that it was in Antioch that the followers of Jesus Christ were for the first time mockingly called “Christians” (Acts XI, 26).
According to Church Tradition, the See of Antioch was founded by Peter the Apostle who was joined by Paul and Barnabas. There, in Antioch, one of the first conflicts within the Church developed between Peter and Paul concerning the necessity of circumcision for Gentile converts to Christianity. Other conflicts followed during the early centuries; this is indicative of the dynamic nature of that Christian Community. As a result, the Patriarchate of Antioch has the right to claim greater antiquity and fuller apostolicity than all the other ancient Christian Churches.

(Taken from the catechetical series: Faith of the Mountain)
Email ThisBlogThis!Share to TwitterShare to FacebookShare to Pinterest
Labels: Maronite Identity 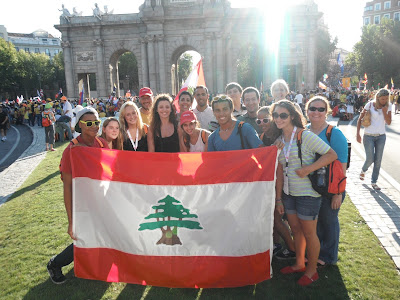 Seven teens from the North Carolina Maronite Church of St Michael the Archangel had the wonderful opportunity to attend World Youth Day which was held August 15 to August 22, 2011 in Madrid, Spain.  The teens were led by Mrs. Marie Van Heusen. Also with the group was Seminarian Ian Van Heusen who gave several spritual talks and Cecilia Romero who served as a translator. Father Samuel Najjar, pastor of St Michael the Archangel along with many parishioners and friends, spiritually and financially aided the group to participate in this pilgrimage.

World Youth Day is an even held every two years in which teens and young adults from all over the world come together to witness their Catholic faith. Many Maronites from Lebanon and Australia were also present in Madrid. Reports from the media estimated that three million people traveled to WYD Madrid. There were many events  which culminated at the Sunday Mass at Cuatro Vientos airfield led by the Holy Father, Pope Benedict XVI. More reports about World Youth Day will be featured in future blogs. 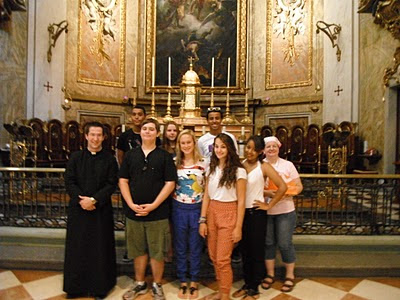 Email ThisBlogThis!Share to TwitterShare to FacebookShare to Pinterest
Labels: Youth

Maronite Patriarch's Visit to the US

NOTE:  If you would like to attend any of the banquets, contact the host parish to purchase tickets.  St. Anthony of the Desert in Fall River is hosting a banquet on October 18th after the 6:00PM Liturgy, tickets are $100.  Reserve now by calling 508/672-7653.
Brooklyn, NY—September 27. Maronite Patriarch, His Beatitude Bechara Peter Rai-- the head of the largest Catholic patriarchal church--will be making his inaugural visit to the United States from Lebanon October 4 to 23, 2011.
The Patriarch arrives in St. Louis, Missouri on Tuesday, October 4. He will then undertake a vigorous pastoral schedule which will take him to Peoria, IL-- October 9; Chicago, IL-- October 10; Cleveland, OH --October 11, Houston, TX--October 13; and Los Angeles, CA--October 13-16.
The last week of his trip brings him on Monday October 17 to Uniontown, PA, October 18 to Fall River, MA, October 18 to Petersham, MA, and October 19 through 23 to NewYork. He is scheduled to meet with Ecumenical leaders Thursday, October 20 at the national headquarters of C.N.E.W.A. and with United Nations Secretary-General, Ban Ki-moon, in New York on Friday October 21.
In announcing the itinerary for the Patriarch’s visit, Bishop Robert Shaheen and Bishop Gregory Mansour, said that the Patriarch, as father and head of the Maronite Catholic Church, was coming with the purpose of “visiting his flock.”
The Maronite Church is the largest of the six Eastern Catholic patriarchal churches, with an estimated 3.3 million faithful around the world and in full communion with the Holy See in Rome. There are 45 bishops throughout the world, two eparchies (Dioceses) here in the United States. His Beatitude’s full title as Patriarch of Antioch and All the East reflects the responsibility he has for the Maronite Church in Lebanon and the Middle East, and from this perspective he serves as a principal of unity for Catholics of the Middle East.
“While the Patriarch is coming to visit his flock here in the United States, as the full schedule of his visits attests, nevertheless, we must not forget that he is also concerned with the broader issue of the future of Christians in the Middle East, as well as the wellbeing of the Lebanese state which was deliberately created to be a home reflecting the conviviality between Christians and Muslims,” Bishop Gregory has said.
While in New York, the Patriarch will hold press conferences—on October 20, at the offices of the Catholic Near East Welfare Association (CNEWA); and on October 21, at the United Nations sponsored by the Permanent Observer Mission of the Holy See.
For press information and interviews please contact:
Monsignor George Sebaali at (804)-270-7234, or 804 -240-9820 (Cell) and email gmsebaali@aol.com or log onto www.stmaron.org or www.usamaronite.org.
Email ThisBlogThis!Share to TwitterShare to FacebookShare to Pinterest
Labels: News
Newer Posts Older Posts Home
Subscribe to: Posts (Atom)