Aleppo's Christians gathered at the Saint Elias Cathedral in the Al-Jadideh quarter of Aleppo, Sunday, to celebrate its first peaceful Christmas ceremony in over four years.
The congregation gathered towards the front of the church as the roof collapsed due to three missile attacks by militants during the Syrian crisis. The residents of Aleppo teamed together to transform the debris of the collapsed Saint Elias Cathedral into a nativity scene earlier this week. 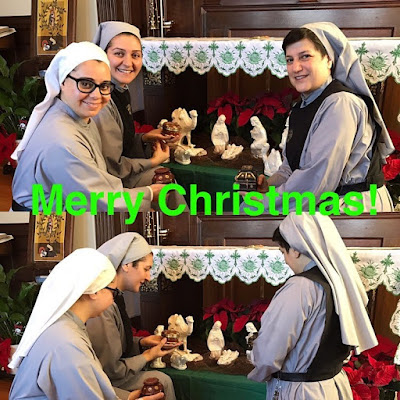 On the Immaculate Conception

Feast of the Immaculate Conception – December 8
The following Homily was given by Fr. Herbert Nicholls on December 8th at the Mother of the Light Convent

On this 8th of December, nine months before her birth we celebrate the beginning of life for Mary as a person, a person who would ultimately agree to the plan of God to become the mother of His divine Son.

Kekaratomena Miriam. The greeting of the angel traditionally translated as full of or filled with grace. Why have modern translations preferred to use “favored”? Some might see an objection that only God Himself is full of grace. Still others might object to the very existence of grace itself. In reality, kekaratomena can be translated as either favor or grace. Both are correct.

For Mary the favor or grace of her immaculate state of being, from the moment of her conception is a call to holiness. In one sense It is unique—for her and for no other; but in another sense it is the same call to holiness for all of us. I came across an explanation I had never seen before.

Because of original sin all of us are in a fallen state of being. We participate in sin in one way or another. We are in need of Christ’s Redemption. Mary, by the grace of God, being preserved from original sin was nonetheless in need of redemption like every human person; but in her case it was uniquely applied to her by anticipation—for us it is by participation.

Pope St. John Paul the Great once wrote: From the very first moment of her conception, she belonged to Christ. Sharing in His grace. Because of her distinction, her obedience, she is redeemed in a more exalted fashion. This does not make Mary any less human. She is not a goddess to be adored. Mary herself sings of God as we have heard so many times: “My Savior who has done great things for me; Holy is His Name”.

When we read the dialogue between the angel Gabriel and Mary it is striking to note not so much how holy, immaculate and clean that Mary is—but rather how free she is to respond to the call of God.

She who was highly favored and full of grace was not faking humility. For God had looked upon her lowliness; and that is why He chose her.

Still a young woman, barely older than a child, she does not allow her human limitations to become an obstacle. She asks a very logical question: How can this be? I have not had relations with a man! Then comes the totally unexpected answer: the power of the Most High will overshadow you; and the child conceived shall be called the Son of God.

Nothing further could hold her back from saying yes to God! Not fear or pride or even false humility. She said so simply: Be it done to me as you say!

Would we be as free? NO! But we do not have the grace of Immaculate Conception either! But we have been redeemed by Christ through participation in Holy Baptism. We have the potential for the same freedom which Mary had through anticipation. The same grace of God is at work in us.

What is it then that holds us back from responding to God’s call to us? Is it because we need an angel sent from Heaven to convince us? Even then would we be convinced? Is it fear? Is it pride? Is it false humility?

Pope Benedict XVI wrote: it is not enough to profess belief in Jesus Christ with words alone. The most profound statement of our belief is the manner in which we live our lives; a journey which is punctuated by daily opportunities to profess one’s faith by saying yes to God!

The message of the Gospel for this feast is not un-coincidental to the message of the season of the Glorious Birth of Christ which we anticipate. It is in that context that we prepare for the Incarnation of the world’s Savior. It is one of joyful hope. Mary is like the dawn that precedes the morning of new life in Christ. We celebrate both to emphasize and honor the close link between the miracle of the Immaculate Conception and the miraculous incarnation of our Lord Jesus Christ.

If we let Him—if we give God permission to do His will, God can do mighty things for us. But in all of His grace, He can do little for us if we are unwilling to say as Mary did: Let it be done to me as you say!

We honor Mary as the Mother of God and as our Mother, our intercessor, like any loving Mother; we should ask today, every day, but especially today, to help us name those things which prevents us from being truly free, from being favored by God, from being filled with grace, so we too can cry: Let it be as you say!

Email ThisBlogThis!Share to TwitterShare to FacebookShare to Pinterest
Labels: Mary 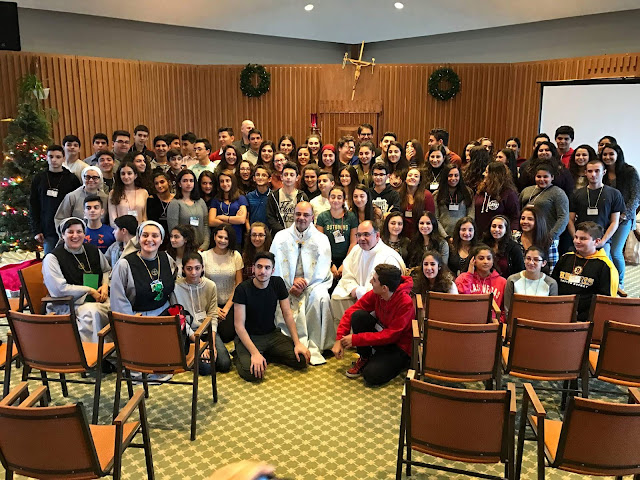 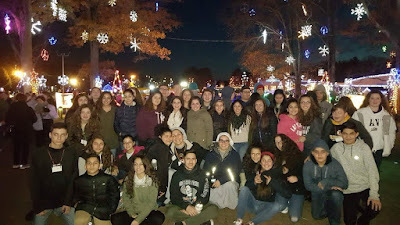 On the weekend of December 2 – 4, the Maronite Servants of Christ the Light facilitated the MYO regional Christmas retreat for the Eparchy of St. Maron at the Retreat Center of the National Shrine of Our Lady of La Salette in Attleboro, MA. 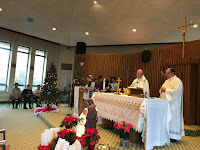 A dynamic group of over 100 teens from several parishes were in attendance including a great crew of adult advisors. The parishes in attendance included, St. Maron’s in Philadelphia, along with their beloved Pastor, Fr. Vincent Farhat, who offered daily Liturgy; Our Lady Star of the East in Pleasantville, New Jersey; St. Charbel’s in Somerset, New Jersey; Our Lady of Purgatory in New Bedford, Ma; St. George in Rhode Island; St. Anthony of the Desert in Fall River, Ma; St. Anthony’s in Lawrence, Ma;  Our Lady of Mercy in Worcester, Ma, and Our Lady of the Cedars, Boston.
The theme of this year’s retreat was “Mercy is Born!”, with a special focus on our Blessed Mother as the servant and mother of mercy Incarnate. 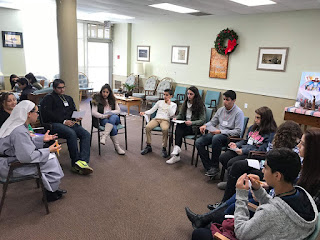 Over the two days, the teens participated in a variety of different events and activities. Of course, this included adoration and confession. God bless the Maronite priests who serve the above parishes that came to offer the Mystery of Penance to the youth. We had a number of different icebreakers, which buoyed the youth in a frenzy of excitement, among them was unwrapping layer upon layer of a Saran wrapped gift.
Friday night concluded on a festive note with a bonfire, roasting marshmallows and socializing, in the crisp air, with cookies, cupcakes, assorted candy and hot chocolate. 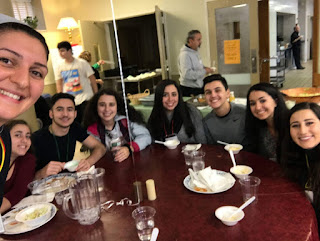 There was no better place to prepare for Christmas than the La Salette Shrine with their famous display of countless miniature lights and catechetical displays which switch on at 5pm everyday during the Christmas season. On Saturday evening, the teens made their way to the Shrine for the blessing of the Manger and the switching-on of the lights. They had some free time to explore the vast display of lights. The evening ended with lots of fun which included pizza and a dabke party. 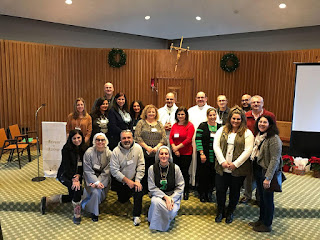 Over the course of the weekend, many of the youth expressed their joy at having made so many new friends, at having this opportunity to bond with God and one another, and at being free to just be themselves and have fun.
Email ThisBlogThis!Share to TwitterShare to FacebookShare to Pinterest
Labels: retreat, Youth

Season of the Glorious Birth of Our Lord 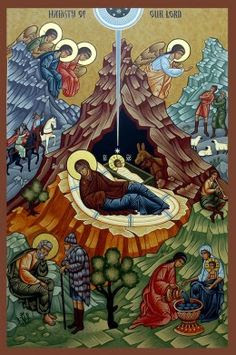 (Syriac: Soboorey, “Happy Announcements”)
The pre-Christmas Cycle has six Sundays, which all focus on the unfolding revelation of the Birth of the Messiah, in the context of the human relatives of Jesus. In this season, there are no particular Maronite customs practiced until immediately before Christmas. Nine days before the Feast (beginning on December 16th and concluding on December 24th) the Maronite Church offers its Novena with voluntary fasting, commemorating the nine months that Jesus was in the womb of Mary (Captivated by Your Teachings, Fr. Anthony Salim).
Below is an excerpt from the Maronite Christmas Novena:
We have offered you, O Wonderful Child and only-begotten Son, the perfume of our incense, the desires of our hearts, the submission of our souls, the adoring reverence of our bodies, and the prayers of our lips. May this be a proper preparation for your pure Nativity. May we be found worthy, on that holy day, for you to dwell in us through the Mystery of your Sacred Body and Blood, as you dwelt in your mother’s womb for nine months. May we be enlightened by the announcement of your holy angels, as were the humble shepherds. May we worship you with true spiritual adoration, as did the Blessed Magi, when we offer you not gold, frankincense and myrrh, but faith, hope and warm love. May these virtues flourish in us and bring forth good works pleasing to your will. To you be glory and thanks, to your Blessed Father, and to the Holy Spirit, now and forever. Amen.
Below are verses 1 and 2 of the well-known Maronite Christmas Hymn, God Sent His Only Son, (Arabic: Arsal Allah):
God sent his only Son from the heavens to the earth as the Light for all the world. God’s Word has hid himself in the Virgin Mary’s womb, and from her, he took his flesh. His star was seen on high, shining brightly in the East, as foretold in Balaam’s words. Wise men, led by the star to the place where Jesus lay, honored him with finest gifts. Halel. Halel. Halelloonoh!
This child Isaiah called “Wonderful and mighty God” and proclaimed him as the Lord: “Upon his shoulders rest full authority and power over all the universe”. In truth, he is the Word and the Voice of God above, roaring with a lion’s strength. Yet, as a gentle lamb, silently and peacefully, he now dwells in Mary’s womb. Halel. Halel. Halelloonoh!