Joy and Strength in Suffering

Email ThisBlogThis!Share to TwitterShare to FacebookShare to Pinterest
Labels: reflection

Reflection: Take Courage and Be Not Afraid 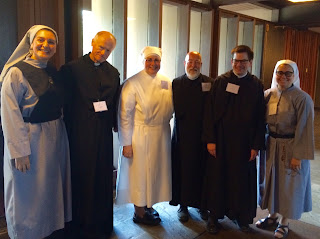 Over the weekend of July 10 – July 12, Sr. Therese Maria and I attended the Portsmouth Institute Conference on Christian Courage in a Secular Age. The Conference was held at the Benedictine Portsmouth Abbey in Rhode Island, and featured a number of well-known Catholic speakers such as Brandon McGinley from EWTN publishing; Sr. Constance Veit from the Little Sisters of the Poor; Robert P. George from Princeton University; and Mother Olga Yaqoob, Foundress of the Daughters of Mary of Nazareth.
A recurring theme throughout the Conference was how do we, as Catholics, stand up and defend our Christian values and beliefs in this current secular age, an age that is increasingly relegating God to the sidelines, if not trying to obliterate His presence altogether from the public sphere. Let’s face it, as Christians, we are living in a tough world, a world that is constantly telling us that there are no truths to uphold, there are no moral absolutes, so why bother? Well, you and I know differently. Because as soon as we start espousing the views of the world, and telling ourselves that there really are no moral values to uphold or live by, then morally reprehensible things like abortion and euthanasia become ‘ok’. But you and I know that they are far from ‘ok’.
The whole line up of speakers over the weekend constantly touched upon and/or alluded to this recurring theme. I want to share with you one or two points from three of the speakers in the hopes that it might embolden you to stand up and speak out in defense of our faith when called upon or challenged to do so by the demands of our secular world.
Brandon McGinley spoke at length at how our secular culture is increasingly encouraging ‘freedom’ and ‘personal autonomy’, at the expense of procreation and fertility. Having a baby is becoming ‘ok’ in our society if it expresses the parents’ autonomy, that is, it is ‘planned’ (the term should be used loosely because we can plan nothing). The underlying current in all this is that people in society today like to feel in control and procreation becomes just one more thing that (they think) they can control. The use of contraceptive devices becomes a key tool in this web of attempting to control when life is produced or not produced. So what’s the remedy to this unhealthiness where God is clearly absent? Brandon calls it the “courage of fecundity”, that is, acknowledging that we are not in control, and relying on God’s grace to get us through any difficulties or trials we may experience, which may be the unexpected arrival of a little bundle of joy. The remedy is to be open to life! 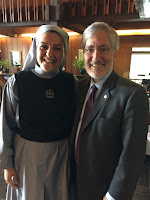 Robert P. George of Princeton University asked the $64 million question – “are we ashamed of the gospel?” The gospel is not just the writings of the four evangelists and the epistles of St. Paul, its not just the New Testament as Robert P. George points out. The gospel is also believing in the Church’s teachings on the dignity of the human person, the sanctity of life and sexual morality. Are we ashamed of the gospel, in its entirety because we live in a culture which attempts to deny, suppress and silence us on these very issues? Food for thought….

The Foundation of Humility

In the Gospel today (cf. Mt 18: 1 – 5), Jesus begins a series of instruction on the way in which His Church is to be administered. The first five verses of Chapter 18 are addressed to leaders, that is, the future hierarchy of the Church. It warns against natural tendencies to pride and ambition. In whatever position they must act with humility.

St. Augustine tells us that humility is one of the main pillars of Christian life. If you ask me, he said, what is the essential thing in the religion and discipline of Jesus Christ, I shall reply:  first, humility; second, humility; and third, humility. 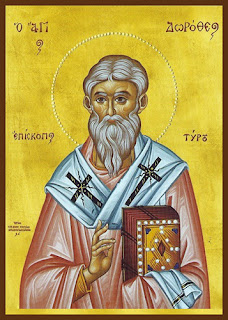 Let us now take a glimpse at our Saint of the day (June 6). Dorotheus was a priest of the Diocese of Tyre. During the reign of Diocletian, he suffered much persecution in his home Diocese, eventually he was driven into exile at Odyssopolis. The lull in persecution under the Emperor Constantine enabled him to return to Tyre where he was elected bishop.

Dorotheus was a man of great learning, well versed in both Latin and Greek, and he is reported to have authored several books. He was a full participant at the Council of Nicaea in 325. Unfortunately Constantine was succeeded by the Emperor Julian who brought back a renewal of persecutions.

He was again exiled to Odyssopolis which today is the port of the city of Varna in Bulgaria. Even so he was not left in peace but so cruelly beaten, that he died of his injuries at the age of 107 in the year 362. 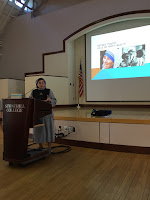 The Maronite Servants of Christ the Light presented a retreat reflection on May 31st (Feast of the Visitation) to the eighth grade students graduating from Trinity Catholic Academy, Brockton. The retreat, held at Stonehill College, was hosted and facilitated by Fr. Carlos Suarez, vocation director in the Archdiocese of Boston, with the focus on their transitioning to high school. 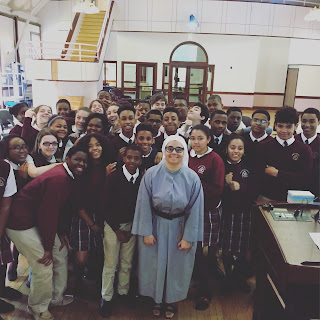 The retreat began with Divine Liturgy celebrated in the Chapel of Our Lady of Sorrows. Fr. Carlos set the tone of the day by reminding the students that they are called to be like our Lady in her visitation to Elizabeth, in that, they are called to come out of themselves and serve the other in their moments of need and difficulty. Let’s face it – its hard to consider the other when we are so absorbed by what’s troubling us, but Mary gives us a beautiful example. Rather than being troubled by so many variables such as, how am I going to make this long journey? What if something happens to my baby along the way? How am I going to explain my pregnancy to Elizabeth? Mary sets out with love, only to find love awaiting her.

After, some fun icebreakers and group activities, Mother Marla Marie presented a retreat reflection on being “mercy”. Specifically, Mother Marla Marie explained how we are called everyday, not just in this Jubilee Year of Mercy, to be merciful to others. Jesus gave us the corporal and spiritual works of mercy, so that none of us can be in any doubt what Our Lord meant when He said, “Be merciful as your Heavenly Father is merciful”  (Lk 6: 36).
Email ThisBlogThis!Share to TwitterShare to FacebookShare to Pinterest
Labels: Youth

Studying at our Seminary - Washington D.C. 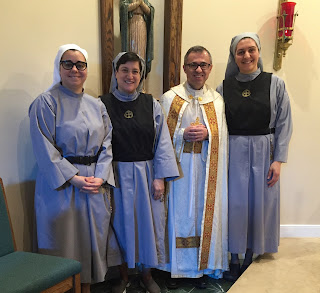 The Maronite Servants of Christ the Light were in Washington D.C. from Wednesday, May 25th to Sunday May 29th for music classes at our Maronite Seminary with Fr. Geoffrey Abdallah,   rector.
The Maronite Divine Praises (the Maronite Liturgy of the Hours) is currently under review in Lebanon.  At present, several of  hymns, psalm tones and chants have been completed and translated into English. We are still awaiting the final version of the full text. As Maronite Servant Sisters, we pray the Maronite Divine Praises three times a day (morning, evening and night).
Fr. Geoffrey taught us several of the new hymns, tones, chants and melodies to be sung during Morning and Evening Prayer across the Maronite Liturgical seasons.   We extend our warmest thanks to Fr. Geoffrey  for giving us his time and expertise to teach us. 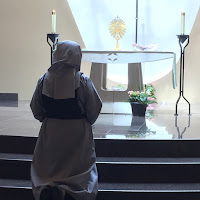 On Sunday, May 29th, following Divine Liturgy at Our Lady of Lebanon, the Sisters participated in a Holy Hour with the parish for vocations to priestly and religious life. It was a great blessing to pray with our parishioners, who so often pray for us.