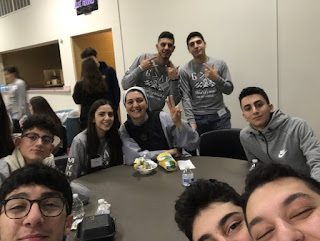 Sr. Therese Maria assisted at the MYO Regional Retreat last week at Saint Anthony of Padua Church in Cincinnati OH. It was a beautiful weekend of prayer, fun and fellowship. The weekend’s theme was Priest, Prophet & King. Fr. Gary, Rosa and a team of chaperones and advisors made the weekend special for the teens coming from several Maronite parishes within the region. 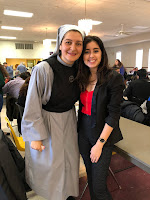 Who Am I to Judge?

The following homily was given by Fr Herbert Nicholls, Chaplain of the Mother of Light Convent on 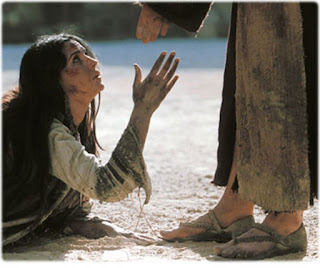 February 21st, 2018.
The homily which I share with you today was actually given by Pope Francis at St. Martha’s in 2014. It is near the conclusion of Jesus’ famous Sermon on the Mount. The Holy Father begins by setting the example: who am I to judge?
That is the question we must ask ourselves in order to make room for mercy. The Pope goes on to explain: Jesus’ invitation to mercy offers us the way to draw nearer to God our Father, and to become like Him, to be merciful as your Heavenly Father is merciful.
That is not easy to understand, that attitude of mercy. Because in short, we judge. That is our attitude, and we don’t leave any bit of room for understanding and mercy.
In order to be merciful, two attitudes are required. The first is self-knowledge…the first step to becoming merciful is to recognize that we have done so many things wrong. We are sinners. We need to be able to say: Lord have mercy on me a sinner. (The Jesus Prayer rope would be extremely beneficial in this regard).
Recognizing that we have done something harmful or hurtful against the Lord or another human being, and being ashamed before God is a grace. It is the grace of being a sinner in recognition and in repentance.
It is so simple, but at the same time, it is so difficult. Our father, Adam gives us an example not to follow. He blames the woman for eating the fruit; attempting to justify himself saying, I have not sinned….Then Eve in turn does the same, passing blame to the serpent.
The Holy Father continues: It is very important to recognize that we have sinned and are in need of God’s mercy and forgiveness. We must not make excuses. We must not put the blame on others. Perhaps someone else helped you to sin, led the way, but ultimately you made the choice. It was your free will. This is why we must acknowledge our sin and not seek to hide from God in shame.
The second attitude needed for the grace of mercy is repentance, which enables us to be merciful to others because we have felt God’s mercy within ourselves.
Jesus taught us in the Lord’s Prayer not only to ask for forgiveness for our sins but to pass on to others that same mercy and forgiveness. Using a metaphor from soccer (the Pope is an avid fan) he says: if I do not forgive, than I am not playing by the rules. I am offside.
These two attitudes of self-knowledge rather than denial, and repentance rather than stubbornness helps to expand our hearts. They enable us to let in the grace that makes room for mercy and forgiveness. This expanse of heart broadens our vision so as to see, rather than look at what others have done, but to ask that question: who am I to judge?
Who am I to gossip? Who am I who perhaps have done the same or worse? The Lords says in the Gospel, Do not judge and you will not be judged!
So in order to be merciful, it is necessary to call upon the Lord, because it is a grace. And this is how a merciful man or woman thinks of their own sins.
If someone says to them: Did you see what so and so has done. With mercy they would respond: Yes, but I have done quite a lot of things myself. How about you? This the Pope suggests is the way of mercy. We must acknowledge our need for it. We must desire it, and we must ask for it.


Seek to expand your heart through mercy. Ask the Lord to give you this grace, and always remember it begins by asking myself: who am I to judge?
Email ThisBlogThis!Share to TwitterShare to FacebookShare to Pinterest
Labels: reflection

Excerpts taken from the book, “Captivated by Your Teachings”, by Rev. Anthony Salim.

In the Maronite Church, the Entrance into Lent begins with “Cana Sunday”. The Wedding at Cana has, as its central theme, transformation. On the one hand we see this pattern: in the Gospel, water becomes wine; in the Liturgy, bread and wine become the Body and Blood of Christ. On the other hand his physical body, changed in the Resurrection, the greatest miracle, a new creation, is symbolized by the water-made-wine. This focus on change should lead us to make the necessary changes in our own spiritual lives. We move from an earthly wedding story to considering our life at the eternal Wedding Banquet.


Great Lent is above all the time of the Great Fast. Fasting, acts of penance and self-denial, as well as intense self-reflection, mark this season. One remedy for sin that the ancient Christians saw as helpful was fasting. Maronite Tradition has always encouraged heroic fasting, and our ancestors excelled at it. Maronites are obligated to fast and abstain from meat on Ash Monday (February 12, 2018) and Great Friday of the Crucifixion (March 30, 2018), and also to abstain from meat on all Fridays throughout Great Lent.
On the Fridays of Lent, the traditional Veneration of the Holy Cross is prayed, and at some parishes, Stations of the Cross are also prayed.


Great Lent is above all a time of purification and reflection before the wondrous celebration of the Glorious Resurrection, a time designed to lead us to personal and communal conversion. In view of our common sinfulness and need of purification, this season is as relevant now as ever.
Email ThisBlogThis!Share to TwitterShare to FacebookShare to Pinterest
Labels: Great Lent, Maronite Identity

Weekend Events of the Sisters

On Saturday, February 3rd, the Maronite Servants attended a Day of Recollection for Consecrated Religious hosted by the Diocese of Fall River, held at St. Julie’s Catholic Church in Dartmouth. 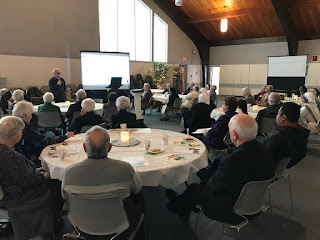 It was a beautiful day of prayer, reflection, conferences, and group sharing. It was a great joy to meet and greet the other consecrated men and women in the Diocese of Fall River.  Mass was celebrated by His Excellency, Bishop Edgar de Cunha of the Diocese of Fall River, himself a consecrated religious. The Bishop gave a beautiful homily on the importance of keeping our love for Christ burning brightly in our hearts, and how this is the key to effectively transforming and touching the lives of others.

On Sunday, February 4th, following Divine Liturgy, the Maronite Servants offered a lesson of Catechesis to the children of the parish on the Feast of St. Maron on February 9th and Great Lent.

Sr. Natalie Sayde spoke to the children about the extraordinary life of St. Maron and how and why he is important to us as Maronites. Sister reminded the children that for Maronites, the Feast of St. Maron on February 9, is a Holy Day of Obligation, and that we should attend Mass, if we can. 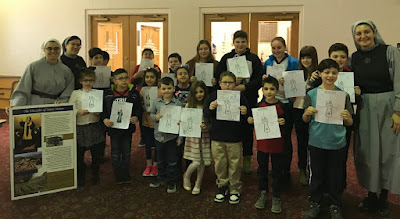 Mother Marla Marie spoke to the children about the importance of the upcoming season of Great Lent, and how Lent is a time for us to exercise our muscles of love, loving God and our neighbor, in a more intentional way. With the help of the sisters and other catechists, each child was able to come up with their own plan for Lent.