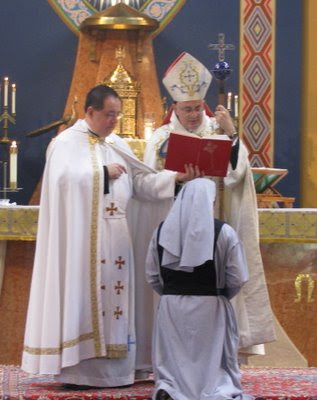 special blessing on her habit by Bishop Gregory Mansour on Sunday August 10th during the Divine Liturgy at the Shrine of Our Lady of Lebanon in North Jackson, Ohio.
Bishop Gregory was assited by Father James Root, Vocation Director of the Eparchy of St. Maron.
What is a Habit? – Habitus (Latin): having, possessing; condition, appearance; dress; character.
The habit is a distinctive garb of a man or woman religious dating back to the beginning of monasticism. Early ascetics, such as Anthony of Egypt, imitated the garb of John the Baptist. Saint Basil, Saint Benedict, and even the widows and virgins in the first few centuries of the early Church were identified by their plain, common attire as signs of poverty and simplicity.
Email ThisBlogThis!Share to TwitterShare to FacebookShare to Pinterest
Labels: News
Newer Post Older Post Home