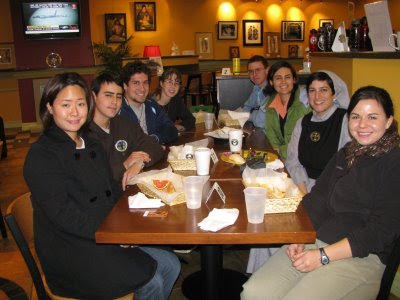 Pictured with Sister Marla Marie are friends she met while visiting at Ave Maria in Naples Florida. A mixed gathering of Maronite and Roman Catholics at The Bean, a campus eatery. (Jan. 15, '09)
Reflection by Andrew Salvia (above photo seated 3rd in from the left):
"My interest in the Maronite Church and Eastern Christianity came about after visiting St. Elias (the local Maronite parish in Roanoke) every year for their annual Lebanese Festival in June. Once I became Catholic after being Protestant during the first 17 years of my life, I was still curious about the Maronite Church. One Saturday evening in September of 2007, I went for Divine Liturgy and have been going there ever since. Fr. Claude was truly helpful in teaching me about Eastern Christianity in general, and the beautiful and rich traditions of Syriac Maronite spirituality in particular. The Divine Liturgy is simply awe-inspiring, poetic and supernatural. Hearing the priest use prayers in the Syriac language (a dialect of Aramaic, similar, if not exactly to what Christ spoke) draws my heart closer to Christ, connecting us closer to Him in a much more personal and spiritual way. The Maronite Church has so much to offer the Catholic Church as a whole. I pray its clergy, monastics and laymen continue to shine forth the radiant Light to the world, just as its founder, St. Maron, did in Syria 1700 years ago."