At the IDC Conference – Washington D.C.

The Maronite Servants participated in the 6thannual In Defense of Christians (IDC) Conference in Washington, D.C. on September 10-11.  IDC was founded in 2014 in response to the tidal wave of violence towards Christians in the Middle East. One of the main goals of IDC is to advocate for policies that preserve Christianity in its ancient homeland. 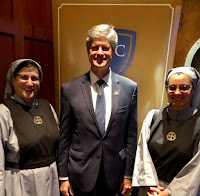 The IDC Leadership Conference commenced on the evening of September 10thwith the Solidarity Dinner featuring a number of congressmen, ambassadors, dignitaries and religious leaders, among them our own Bishop, His Excellency Gregory Mansour. We heard from Mr. Samuel Brownback, the Ambassador at Large for International Religious Freedom. Mr. Brownback encouraged all participants to keep up the fight for religious freedom, predominantly through constant prayer, as God is the source of all freedom and unity.

Towards the close of the evening, we heard a moving and poignant testimonial by Mrs. Mona Rizk Rowan who shared her harrowing story of surviving the Damour Massacre in Lebanon 1976.

The next day on September 11, the sisters joined Mr. Steven Howard from IDC and the Massachusetts constituents, among them were Mrs. Rowan and her family, to advocate for the Coptic Christians in Egypt and recognition of the Armenian Genocide.  We visited the offices of Congressmen William Keating, and Joseph Kennedy, as well as, the office of Senator Elizabeth Warren. 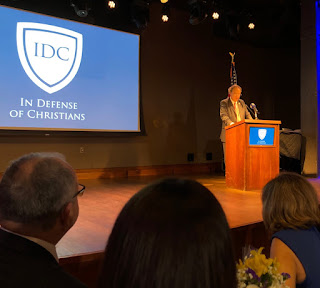 These were two very grace-filled days for us, as we witnessed to the importance of religious freedom in the Middle East and provided a voice for the voiceless. We are grateful to the President of IDC, Mr. Toufic Baaklini and his dedicated Board of Directors for their ongoing efforts of fighting for equality, freedom and security for religious minorities in the Middle East.