Maronite Young Adults at the March for Life- Washington DC 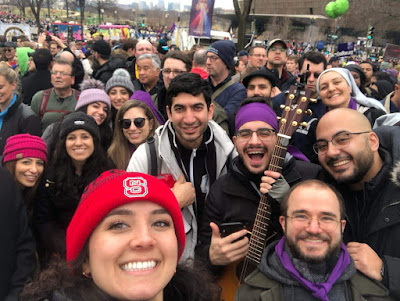 This year marked yet another fruitful March for Life. Running consecutively for 47 years, this year’s peaceful protest was record breaking. The crowd roared in support when President Donald Trump took the stage as the first President of the United States to deliver a speech at the March for Life in person. Accompanied by his family, he inspired the crowd reminding them, “When we see the image of a baby in the womb, we glimpse the majesty of God’s creation. When we hold a newborn in our arms, we know the endless love that each child brings to a family.” It was televised and heard across the record breaking crowd of 500,000 people. Families, students, religiously affiliated groups and friends came to march together. Surveys show that the youth made up half of the crowd. Proving yet again that they are the Pro-Life Generation.
Pro-Life state of Lousiana representative, Katrina Jackson, also spoke, bridging the political gap. Her passion shone through her words, “We know as believers that God does not conform to man’s law,” she continued, “At the end of the day, it is up to each of us to pray and stand in the gap in prayer for those who need our help and see things change for the better.” “In addition to being pro-life, let us also be pro-love,” she challenged.“  As Christians, we are not called to judge one another but help the least among us.”

Being Pro-Life is not to shame those who have gone through or been affected by an abortion. It is to prevent that choice from being made in the first place. Powerful messages on signs resonated with us, such as, “I regret my abortion”. A sizable group of Maronites marched with the crowd, including Bishop Gregory Mansour, the Maronite Seminarians, the Maronite Servants of Christ the Light, members from the Maronite Young Adults and the Maronite Youth Organization.
We broke our own personal record as MYA, having had seven National Maronite Young Adult Board members attend. They included, Director Sr. Therese Maria, President Sami Shaia, Vice President Hana Chemaly, and honorary board members, Maya Khoury, Mira Aoun, Sandy Risha, Julie Lattouf, and Antony Harb. Overall MYA members from eight states attended: NC, FL, OH, VA, MI, NJ, NY.
A session with Bishop Gregory was held following dinner sponsored by the Maronite Seminary. It was an interactive discussion on the difference between Palliative Care and Euthanasia, including professional insights and experiences from several attendees. This discussion ended with a short and informative presentation on Natural Family Planning by Marise Frangie.
It’s always an act of courage to witness and partake in the March for Life. We pray for the souls of all the lives lost at the hands of abortion, and for healing and peace among all those who are affected. You are loved, forgiven, and surely not alone.
Email ThisBlogThis!Share to TwitterShare to FacebookShare to Pinterest
Labels: MYA, Pro Life
Newer Post Older Post Home