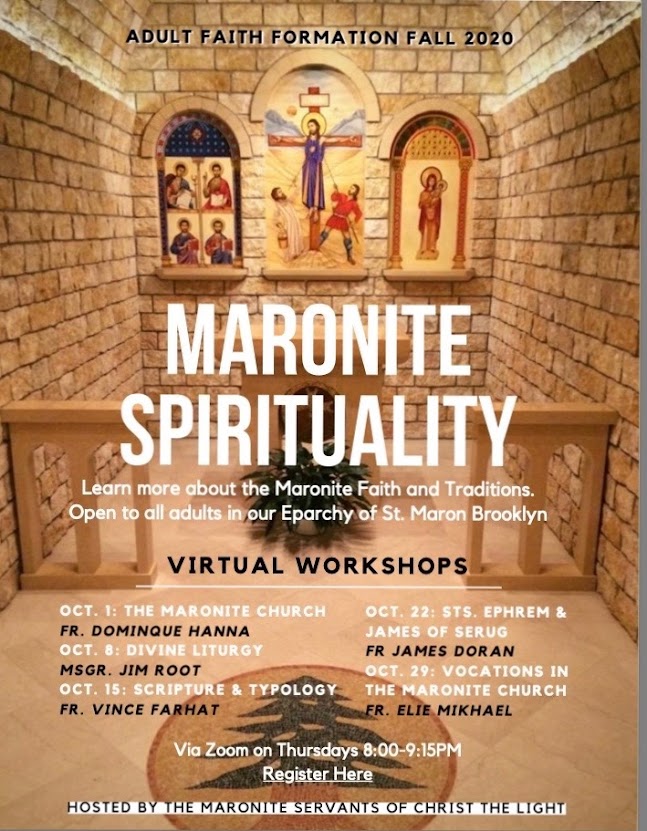 The Feast and Season of Holy Cross

The liturgy is absolutely fundamental to Christianity: the New Testament shows the Church as a worshipping community, gathering for the adoration of God, the climax of which is the Eucharist. The liturgy is not a man-made add-on to the faith: it is of its essence, and its feasts are major signposts for the Christian and for the Church. This feast, celebrated on 14 September, was established to commemorate how, in 628, Emperor Heraclius recaptured the Cross which the Persians had stolen in 614. On this day we also commemorate the finding of the Cross by St Helena in 326, and the subsequent dedication of the Church of the Holy Sepulchre. It is therefore an occasion to remember in prayer four matters: the Holy Cross itself and all that occurred in relation to it, namely, the ... Read More click on photo 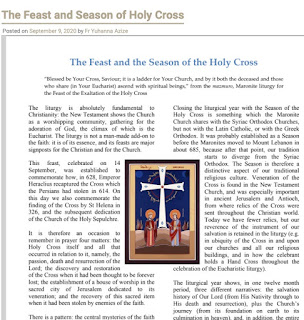 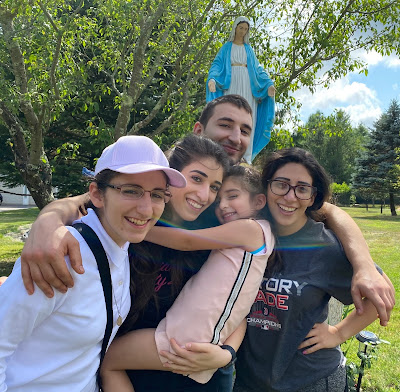 By Emily Lattouf, MSCL Postulant (pictured with her siblings)

Turning to Mary in times of trouble is a lesson I learned from my earliest youth. One of the lullabies my mother would sing is the hymn, “We Run for Protection." This Marian hymn was a source of great comfort to her during the civil war in Lebanon.  My mother told us that whenever there was a bombing near the school, the Sisters would gather the children into the chapel and they would sing this hymn asking the Blessed Mother’s intercession. When my father fled the civil war and came to America as a young boy of ten, he brought with him a picture of the Immaculate Heart of Mary.

Jesus teaches us that we can depend on Mary to be with us when we are experiencing crosses in our life. Christ looking down from the cross saw His mother standing beneath and I am sure this brought Him great comfort. Our Blessed Mother is with us and for us, she brings us comfort and consolation. My parents held fast to this and passed it on to me.

Mary knows and understands our pain. We can turn to her and rest assured that she will take care of us. Mary carries our needs in her heart to the foot of the Cross of Christ. Our crosses may not disappear, but our Mother is walking the road to Calvary with us and she will lead us to her Son who is the Resurrection and Life.

Mary be a mother to us now.  Our Lady of Lebanon pray for us.

We run for protection to you

Mary, we come to you for aid.
We implore you turn not away
Mother who must be obeyed.

Perfection of the pure
Mother undefiled.
By your merit plead for us,
let us know your Child.

Mary Heaven's gate
Mother of our Lord
Through you source of all our hope
Guiding light has poured.

Look down upon us all
serving faithfully
We implore your help and care
at our Mother's knee.

Email ThisBlogThis!Share to TwitterShare to FacebookShare to Pinterest
Labels: Mary

The Assumption Of Our Lady Into Heaven 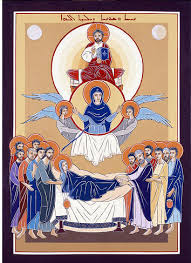 Why do we celebrate each year, on 15 August, the Feast of the Assumption of Our Lady into heaven? And why is it the greatest of the feasts of Our Lady? Why not her birth, or the Annunciation, or the Immaculate Conception?

The truths of the faith form a coherent unity, like how the woollen threads of a cardigan are knitted together: they make one garment with one function. The cardigan is to keep us warm, and the faith is to teach us the commandments of God our Creator so that we may be reunited to Him: imperfectly in this world, but God willing, more perfectly in the next.

Like the threads of a cardigan, the truths of the faith can only be separated one from the other by destroying the whole. Remove one thread, and with time, the whole cardigan will fall to pieces. So too, one begins with rejecting just one part of the faith, but, bit by bit, it will all be lost to us. Some threads of the cardigan are more central than others, and pulling them out will cause it to lose its shape more quickly.

The Assumption is a central thread in the garment of the faith. It is intimately connected to the doctrine of Our Lady as the Mother of God. This is the reason for the Assumption: the Lord could not leave His own mother on the earth to suffer corruption of the body which had borne Him, the King of Creation.

We cannot understand the magnitude of Our Lady’s obedience to God: this is the only reason we are not lost in wonder at it. When the Archangel Gabriel appeared to her, and gave her the message from the Most High, she knew only that a miracle would be worked so that she would bear a son in circumstances which no one on earth could possibly understand; that a virgin would become pregnant and give birth. We rarely stop to think about it, but it means that her own life was over in that it would take a course which no life on earth had ever taken before. She willingly became completely subservient to God’s plan in a way she could not comprehend. After all, what it would mean to tell a young woman that she would conceive when the Holy Spirit overshadowed her?

In every single Mass we confess this great mystery of how a mortal woman became the Mother of God. As stated, this is why she was assumed body and soul into heaven. This shows how the Assumption is closely tied to Mary’s being the Mother of God, and how to lose one teaching is to lose the other.

The Assumption is the earthly conclusion of the cosmic drama which began with the Annunciation to Mary the daughter of Saints Joachim and Anna. No other ending of her earthly life could possibly have done justice to the epic news announced by the angel.

Therefore, if we let go of these doctrines, then we also lose the Incarnation of the Lord. It is because she, a lady of flesh and blood was His Mother that we can say Our Lord was truly human as well as truly divine. If Mary was not the Mother of God, then she was the mother of a man. This is exactly what has happened in many non-Catholic and non-Orthodox groups. They have rejected any devotion to Our Lady at all, therefore have no conception of her being the Mother of God, and so came to see Jesus Himself as being only a man, and not God. After all, no one denies that Mary was His mother. But if they reject the Virgin Birth, then they reject the foundation of the full divinity of the Lord. It gives me no joy to criticise others, but I must point out the logical and historical consequences of rejecting any part of the one truth.

Even if the first ones to deny that Mary was the Mother of God still thought of Our Lord as being divine, it was only because they did not think through the consequences of their own fundamental premises. Well, even if they did not think it through, their children and grandchildren have, and so belief in Jesus as true God and true man has been in steady decline in the Christian world since the Protestant Reformation, so that now He is often seen as being no more than a good man and wise teacher. It does not matter if someone says that He was the best of men and the wisest of teachers: it still leaves Him as only a man and a teacher. And so they feel free to change the faith to accord with their own ideas: they have made their assessment of the Lord, why not assess his teachings for themselves?

Let us move on. If we look at the Assumption, it is not possible to draw any conclusion other than that Our Lady lived a life of the greatest virtue and holiness, and for this was worthy to be taken into heaven. Had she sinned, this would not have been possible, for she would not have been an example of her own Son’s teaching. And in this the Assumption is a type or pattern for all humanity. If we too live as virtuously as possible and in the greatest holiness we can, we may be able to hope that we too will be saved. We cannot match Our Lady for purity and love, so we cannot expect to be assumed into heaven. But the type of thing which Our Lord did for her, He may, in His infinite mercy, do for us, as well. So, if we lose the teaching of the Assumption, we lose the reward of virtue and the punishment of evil. Again, those groups which have lost the Assumption have started to lose their faith in eternal reward and eternal punishment, which means in eternal justice. And if there is no eternal justice, then God is not God. He is well-intentioned, but weak (or else a tyrant). And so the whole of the faith disintegrates.

In both Eastern and Western Churches, many more connections between Our Lady and the faith are made by typology. We all see Our Lady as the second Eve. As St Jacob of Serugh states: “The second Eve gave birth to Life, among mortals; she wiped clean the bill of debt incurred by Eve her mother. The child (Mary) gave her hand to help her aged mother (Eve) who lay prostrate; she raised her up from the Fall that the serpent had effected. It was the daughter (Mary) who wove the robe of glory and gave it to her father (Adam) …” (trans. S. Brock).

Yes, if we celebrate the Assumption with devotion and understanding, I do not think we can lose our faith in her as Mother of God, in the Incarnation, in the true divinity and humanity of the Lord, and in His teachings, the necessity to follow His commandments, and the justice and goodness of God Almighty. I have not had space to draw other more directly spiritual lessons from this Feast, but God willing, I shall do so in the future; for as stated, the faith is one garment, an organic, coherent, and splendid unity: like the light of an infinite sun which illumines all that has been, is, and ever shall be.