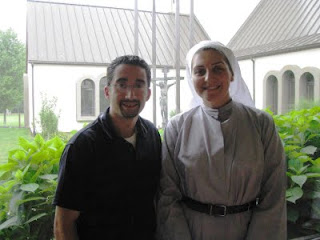 By Sister Therese Maria Touma
On our recent visit to the Shrine of Our Lady of Lebanon in Ohio, I interviewed Richard Loutfi (25), from Brooklyn N.Y. about his terrible attack in Queens, N.Y. which had left him with brain damage and other physical limitations. On the upside, we also discussed at length his journey of recovery and the good that has come from this tragic event, a deeper conversion to the faith and a greater appreciation for the gift of life and especially the simple things in life!
I asked Richard three main questions:  What happened to you on the night of your attack?   How did it affect your life?  How has it changed you as a person?  Here I share a summary of our conversation:
On August 15, 2009 Richard was viciously attacked and robbed by a group of men in Queens, N.Y. on the evening of the Feast of the Assumption. He was left unconscious and wounded in the street. When he woke up hours later, he heard a woman’s voice tell him to “go and look to your left to get help.”   Richard sensed that it was the Mother of God.  Once Richard managed to get up, he went to get help and came across two men, who saw him bleeding from his nostrils and ears. So the men called the ambulance, and Richard was immediately rushed to Jamaica Hospital Medical Centre.
At the hospital four trauma responders worked rapidly to control the pressure and bleeding from his brain, so that they could then transfer him to undergo brain surgery. After the extensive brain procedure, Richard was bed ridden for a month. His body was weak, his speech had been severely impaired, he had no strength to walk and function as he would normally do. He had to go to rehabilitation to re-learn how to walk and talk, and he continues with rehab to this day.
Furthermore, as a result of the attack, Richard suffered post traumatic stress and paranoia. He lost trust in all his friends. He became quite angry towards the world, the police, and even his closest friends. He lost contact with all of his old friends and broke of his relationship with his girlfriend. He was quite shattered emotionally and physically from the hurtful incident.
However, today Richard happily stated that he is now at peace with God and the world, as he has made many new friends who are sincere and supportive. Most importantly, he attributes his healing and recovery to the grace of God and the Mother of God. This event has completely changed Richard for the better as he has become happier as a person, as he has put his full trust in God, through the power of prayer.
Two years later, Richard is now speaking at a 90% capacity and walking with the help of a cane for balance. Spiritually, Richard has grown closer to God and his love and devotion towards the Mother of God has grown tremendously. He is now spending more time in prayer, and loves to pray the rosary each day.
In conclusion, Richard shared some beautiful thoughts, he said,  “I don’t take things in life for granted, especially the beautiful gift of life. I smile now when bad things happen, I smile when I see the sun, I stop to smell the flowers and take in the beauty around me. I thank God constantly for his creation and the gift of his peace. I am happy I can see, walk and feel…I am alive and at peace with God.”
Email ThisBlogThis!Share to TwitterShare to FacebookShare to Pinterest
Labels: Witness 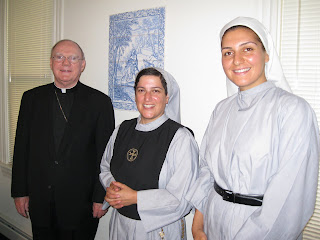 The Maronite Servants met with Most Reverend George W.Coleman, bishop of the Fall River Diocese.  The Sisters introduced themselves to His Excellency and shared about their mission and convent in Dartmouth, Massachusetts.  This was a courtesy visit to meet the local ordinary of the Latin diocese in which Dartmouth is located.  Bishop Coleman gave the Maronite Servants a beautiful blessing on their mission.
Email ThisBlogThis!Share to TwitterShare to FacebookShare to Pinterest
Labels: News

Feast of the Assumption -- Ohio

Last weekend August 13-15th the Maronite Servants drove to North Jackson, Ohio to attend the 46th Annual Assumption Pilgrimage at the National Shrine of Our Lady of Lebanon. It was a blessed weekend filled with many graces, as we joined our Maronite family in joy to celebrate the feast.  Some of the highlights included Maronite, Latin and Byzantine Liturgies, Spiritual conferences, candlelight processions, Maronite Vespers (Ramsho), Confessions, and the Paraclesis to the Blessed Virgin. 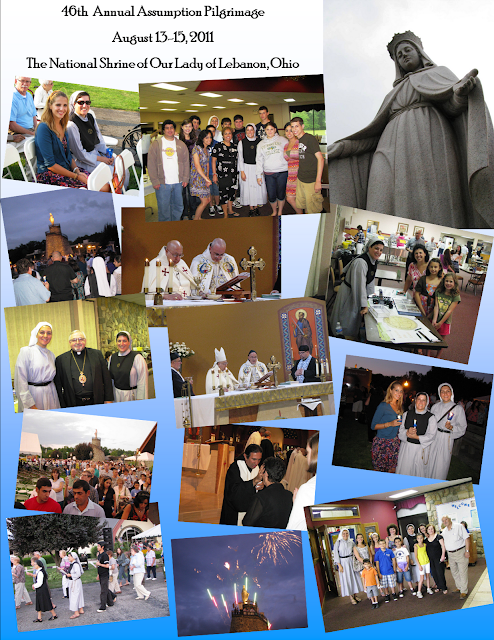 May the powerful prayers of our Blessed Mother continue to guide and strengthen our Maronite Servant mission, and we especially pray for an increase in religious vocations to our community.
Email ThisBlogThis!Share to TwitterShare to FacebookShare to Pinterest
Labels: Photo Collage


This is Part I of a three-part article on Saint Marina the Monk. Part I narrates her hagiography in the Maronite tradition, gives an overview of the most important references pertaining to her story, relates legends about her relics and describes her Office and Ode. Part II deals with her churches, sanctuaries, cults, and iconography in Lebanon and Cyprus. Part III uncovers the author’s newly discovered Ode in honor of the Saint written in Arabic with Syriac scripts (Garshuni).
I. INTRODUCTION 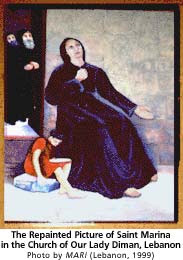 There are six well known saints with the name of Marina or Marinos – Marina the Monk (or Marina the Syrian), Marina the Martyr of Antioch, Marina of Spain, Marina of Alexandria, Marina of Sicily and Marina the Cistercian (Clugnet 1904: 564- 568). However, there are most likely two who have truly existed -- Marina of Antioch who accepted martyrdom for her faith and Marina the Monk who suffered the consequences of her imposture as a male monk in the Monastery of Qannoubine, Lebanon (Clugnet 1904: 568).
Léon Clugnet states that the confusion pertaining to all of the other saints named Marina is due to the translators and the copyists’ attribution of the saint’s origins to their own countries or other countries that they felt better fit the Saint’s life. This is why we find that the Greek version of Saint Marina’s life places her birth in Bethany; the Coptic version in Egypt and some of the Latin places it in Italy (Clugnet 1904: 265 footnote # 2).
According to the most ancient accounts on Saint Marina the Monk, only one place of origin could be hers -- Lebanon. Clugnet resolves that until new discoveries are made, the only origin of Saint Marina must be the one known to us according to tradition and since the only tradition about this Saint is found among the Maronites of Lebanon, then Lebanon is to be considered the land of her birth (Clugnet 1904: 565). The Maronites resolutely believe that Marina originated in Lebanon and that as a monk she has lived and died in the Monastery of Qannoubine in the Holy Valley of Qadisha. J. Fiey in turn concludes that Marina in question is truly a local saint of Lebanon, victim of imposture (Fiey 1978: 33).
Marina was disguised as a man in order to join her father in the monastery. She was later accused of fathering a child. She did not defend herself from the crime she was accused of, but with humility accepted the severe punishment that was pronounced against her by the Abbot: to leave the monastery and to raise the child. She spent the rest of her life living ascetically and looking after the child. Her identity as a woman was only revealed after her death.


Monastic life in the fifth century was much more a cenobitic life, which is a communal ascetic life, than anchoretic, which is a solitary ascetic one. The Cenobetic monasteries had small but separate cells where the monks lived, this made it possible for Marina to conceal her identity. With her male name, short hair and clothes, but mostly with her ascetic living, which changed her body’s biology, hence made her lose much of her womanhood appearance and physical nature, Marina was able to go on living at the monastery with a disguising identity until her death.
As to the century in which this Saint has lived, Clugnet agrees with F. Nau that it must be the fifth century since there were great details in her legend presented in the Syriac Manuscript Nº 30 dated 778 AD, folios 70r-76v of the Monastery of Saint Catherine in Sinai (Clugnet 1904: 565, 593).
(To read the rest of the article click here.)

Qorbono at the Convent in Dartmouth


My 2011 summer experiences with the MaroniteServants of Christ the Light

By Evette Franjieh
As my freshman year at Umass Dartmouth came to a close, I found myself helping Sister Marla Marie at the Maronite Servants of Christ the Light’s new convent in N. Dartmouth. I am so blessed to have the Sisters about ten minutes away from my University, so that during the year I can always look to them in mytime of need or stress and share Divine Liturgy in their new home.
I volunteered to help clean the convent and spend some quality time with Sister Marla Marie and Sister Therese Maria. I write this only a few days after I have visited with the sisters. My first encounter with them in July was a quick visit to the beach for a picnic supper and walk. Sister Marla Marie prepared a quaint picnic for us and Sister Therese Maria shared God’s messages to me during our walk on the beach. It was very enlightening to have the endless water, the serenity of the small beach, and the presence of the Sisters with me.
Because I was attending a summer course in Chemistry, I was not able to attend Sunday Liturgy. My mother so happened to mention this to the Sisters at Sunday Liturgy, at St. Theresa’s parish in Brockton.  Therefore,on Friday, July 29th, I attended the Divine Liturgy at the new convent. It was the first time that the Divine Liturgy was held in the new chapel. After the refreshments, Sister Therese Maria and I dusted and cleaned the sacristy. I enjoyed cleaning and conversing with Sister Therese Maria because it grounded me and offered an air of humility.  Their new home has developed quite nicely since my last visit in May, although, there is a lot of work and time to be had. I know that in time, next year I will seek their guidance and prayer more often and that they will always be there for me.
Email ThisBlogThis!Share to TwitterShare to FacebookShare to Pinterest
Labels: News
Newer Posts Older Posts Home
Subscribe to: Posts (Atom)