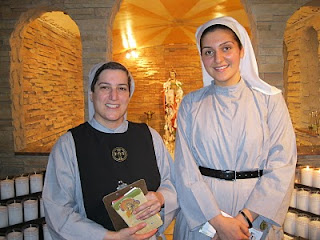 The Maronite Servants of Christ the Light have written prayers of petition for vocations according each Sunday of the Maronite Liturgical year. These brief, one-sentence prayers are designed to be included the weekly church bulletin as a reminder to the faithful to pray for vocations. The prayers are available on the vocations website: VineyardoftheLord.com at the “Get Involved” link, under the category of “vocations”. Please encourage your bulletin editor to make use of these weekly prayers by including a vocations corner in each bulletin.

Here is a sample of an up-coming prayer for the Third Sunday After Epiphany: “’Very truly, I tell you, no one can enter the Kingdom of God without being born of water and Spirit.’ Gracious Father, grant that the families of our parish may grow in your spirit of holiness. We especially pray that parents may encourage their children to seek first the Kingdom of God in choosing their life’s vocation.”

For more information on the mission and life of the Maronite Servants, visit our website at MaroniteServants.org and our blog at RadiateHisLight.blogspot.com.
Email ThisBlogThis!Share to TwitterShare to FacebookShare to Pinterest
Labels: Vocation

Feast of the Circumcision of Our Lord

(Taken from the Synaxarion of the Feast.)

"The entire Maronite Liturgical year is centered on the life, death and resurrection of Jesus. The Season of Announcement recalls for us the great events in the history of our salvation leading up to the Birth of our Lord.
The Feast of the Circumcision of Our Lord celebrated in our Maronite Church on January 1st, commemorates an event in the life of Jesus which took place eight days after his birth: his naming and circumcision.
According to Hebrew Law, every male child was to be circumcised on the eight day after his birth (Genesis 17:11-12). Circumcision was the sign God gave to Abraham of his covenant with his chosen people. Through circumcision the Hebrew child received the physical sign of his membership in the chosen people of God. At the time of circumcision the child was also given the name by which he was to be known among God’s people.
It is thus that Jesus is circumcised and given his name which means, 'Yahweh is Savior.'
Jesus, as God’s true Son had no need of circumcision and yet, in order to show that he was the fulfillment of the law, he submitted to its prescriptions. Jesus was already a member of God’s chosen people; for, in fact, he was God’s chosen One, the Son of the Most High. And yet, Jesus not only observed the prescription of the law, he also surpassed them since after his death and resurrection, the New Covenant would be established and the Old Covenant would be abolished.
The infant church questioned whether circumcision was necessary for those who wished to become Christians. Saint Paul who brought the gentiles into the Church asserted that circumcision is no longer required in the light of the death and resurrection of Jesus. One becomes a member of the new Israel, not by circumcision of the flesh, but by faith and baptism in Christ Jesus (Colossians 2:11f)."
Email ThisBlogThis!Share to TwitterShare to FacebookShare to Pinterest
Labels: Liturgy

Glorious Nativity! Milaad Majeed! Joyeux Noel! Merry Christmas!
You are remembered in prayer and especially thought of during this Christmas Season of the Glorious Birth.
“Today the Lord Jesus is born of the Blessed Virgin Mary, and he has freed all people from their captors. Let us raise a hymn of glory.” (Christmas Divine Liturgy, Proemion)
Email ThisBlogThis!Share to TwitterShare to FacebookShare to Pinterest
Labels: News

By Sister Therese Maria
Last weekend, December 10-12th, the Maronite Servants took a road trip to Philadelphia to visit Saint Maron’s Maronite Church. Father Michael Marone, parish administrator gave us a South Philly welcome and provided us with great hospitality. We were right at home in this community.

As part of the mission trip, Mother Marla Marie spoke the Divine Liturgies and shared of her unique vocation journey and the founding of the Maronite Servants’ mission, and the importance of praying for and supporting vocations. She also made an appeal to the people for financial help sustaining our vital mission. After the Sunday Liturgy, the parish hosted a reception in the center where we enjoyed visiting with the parish family.
Father Michael was good to take us on visits to some of the historic sites of Philadelphia including the National Shrine of St. John Neumann, the Shrine of the Miraculous Medal, and one of the important landmarks of America’s history, Independence State Park. 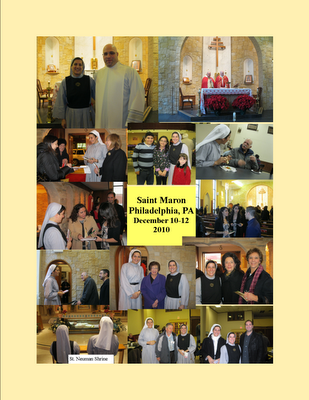 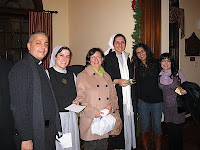 On Sunday December 5th, we joined with the Westchester Maronite Mission in White Plains, New York and enjoyed visits with the religious education children, the MYO, and Divine Liturgy celebrated by Abouna Jean Younes, pastor.  We are grateful for the hospitality and generous welcome of our Maronite Servants' message and mission.  This growing mission Community is able to use the facilities of the Sisters of the Divine Compassion. Here are a few scenes from the day... 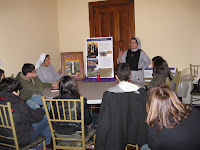 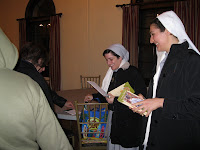 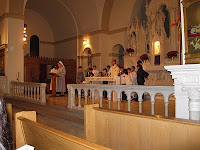 Pro- Life Efforts After the Elections - - What Can We Do Now?

By Deacon Nicholas Mammi
Office of Family & Sanctity of Life for the Eparchy of Saint Maron
Many faithful Catholics wonder what they can do politically once they have voted. Above all, we must continue to press our elected leaders to uphold pro-life principles. Write your sena-tors and  congressman and encourage them to support the following bills; each represents a “cornerstone” of Catholic pro-life ethic. 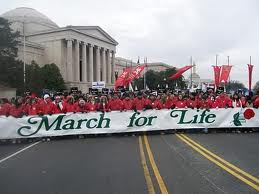 The Eparchy of Saint Maron of Brooklyn Office of Family and Sanctity of Life invites all youth and young adults throughout the Eparchy to come to Washington, D.C. to join in the 2011 March for Life! Our Lady of Lebanon parish will host a limited number of young men and women overnight in its social hall from Sunday through Monday, January 23-24.
Partake in prayer, sacraments, prolife talks, interaction with prolife young people, advocacy, and dialogue with members of Congress. MYA and MYO members are encouraged to attend. Adults 39+ are welcome as chaperones.
To register, contact Deacon Nicholas Mammi (nmammi@swva.net or 540-420-4725) or Joseph Elhallal (jhallal@verizon.net or 540-815-2104). RSVP by December 13th.
Email ThisBlogThis!Share to TwitterShare to FacebookShare to Pinterest
Labels: News, Pro Life
Newer Posts Older Posts Home
Subscribe to: Posts (Atom)