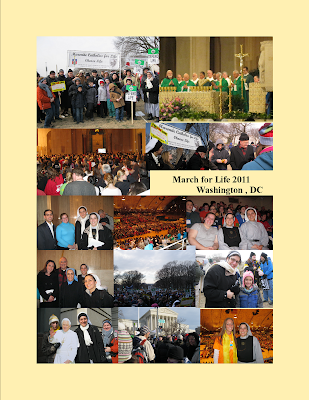 By Sister Therese Maria
This was the first time I participated in the March for Life in Washington D.C.. My experience of this event was positive as we joined with a massive crowd of people (it was reported approximately 400,000 people) came from all over the country to witness to the dignity and sacredness of human life.
Overall, I was deeply impressed by the witness of so many groups and their banners promoting the child’s right to life. I found the people in the march to be calm, as they prayerfully walked to protest against the American law allowing abortions
The night before the March, we attended the vigil Liturgy at 6:30pm in the Basilica of the National Shrine of the Immaculate Conception. This beautiful Liturgy was celebrated by Cardinal DiNardo, Archbishop of Galveston-Houston and concelebrated by many bishops and priests, including our own Bishop Gregory J. Mansour.
Several Religious communities, priests, seminarians (including our Maronite seminarians), youth, laity and groups from all over the country participated in the Divine Liturgy. The procession of bishops, priests, and seminarians was an awesome sight to behold as the entrance procession on its own took 40 minutes.
On Monday January 24th at noon on the Mall, we connected with Bishop Gregory and a group of Maronites, and joined with all those gathered in solidarity and prayer. It was beautiful to see our young families and children came out to give witness and march for life, even in the freezing weather!
In the morning, before the March, we attended the Youth Rally and Mass for Life at the DC Armory. The dynamic program commenced at 8:00AM and included praise and worship, confession, the rosary and Divine Liturgy at 10:30AM. I was reminded of the joyful celebrations of World Youth Day 2008 in Sydney. Jesus Christ is the joy of our lives! He is the reason why we come together to celebrate, to worship and to encounter Him in the Mysteries (Sacraments).
Email ThisBlogThis!Share to TwitterShare to FacebookShare to Pinterest
Labels: News, Photo Collage, Pro Life

Our Maronite Bishops were hosted on "EWTN Live", July 7, 2010, by Fr. Mitch Pacwa during our NAM Convention in Birmingham, Alabama.  Sister Marla Marie was asked to speak a few words on the foundation of the Maronite Servants of Christ the Light.
Email ThisBlogThis!Share to TwitterShare to FacebookShare to Pinterest
Labels: Video

In our congregation’s Typicon (Rule of Life), Chapter 3 article 26 on our life of the vows, it reads:
“…The sisters shall exercise the virtues of humility, prudence and temperance, and use the means necessary to promote health of mind and body which includes daily exercise, recreation, work and rest.”
On Tuesday January 11th, the Maronite Servants went ice skating at Patriot Place in Foxboro with Evette Franjieh, her dad Will Franjieh, and Julie Lattouf (pictured in the photo). These energetic college students are faithful parishioners at St. Theresa’s in Brockton, and have visited our Monastery previously for a retreat. They were great fun and we were blessed with good weather, as we skated under the warm sun, encouraging one another in our skating skills and consoling one another in the falls (thank God not too many of those!).
Email ThisBlogThis!Share to TwitterShare to FacebookShare to Pinterest
Labels: News

The Season of Epiphany

In our Maronite Church we are currently in the first week of the season of Epiphany which began last Thursday January 6th on the Feast of the Baptism of the Lord.

”In the Eastern Catholic Churches the Feast of the Baptism of the Lord is celebrated on 6 January; whereas in the Latin Tradition it is celebrated on another day. It is known in Syriac as Denho.
• The Syriac term Denho itself may be related to the word for the act of diving into water, as we see Jesus descending into the Jordan River to be baptized by JohnOther names for this feast are “Epiphany” and “Theophany.” Both terms are based on Greek words which together mean “manifestation,’ i.e., of a god.
• “Epiphany” means a manifestation in a more general way; we even speak today of “having an epiphany” (having an “A-ha! moment”) when we get a flash of insight. Obviously, though, in a Christian liturgical context such as this feast, we understand that the Godhead is being revealed in Jesus. He of course was always God, but at the Jordan the Gospel writers are showing us that he is being revealed as such.
• “Theophany” is more religiously explicit. This word comes from two Greek words—originally in pagan Greek culture—that mean that a god is revealed (Zeus, Apollo, Artemis, et al.). In Christian terms the God of Abraham, Isaac and Jacob (the Patriarchs) is revealed in Jesus, THE only God of Jewish and Christian (and later in history) Muslim faith—although, of course Jews and Muslims do not accept Jesus as divine.

Taking the Baptism of Jesus as a model, the Maronite Church celebrates our new life of Baptism and Chrismation in this Season. For some Syriac Churches, this season may be the traditional time of reception of catechumens (people who are being instructed in the Catholic faith) into the Church.
In Maronite culture many people wait to have their babies initiated (i.e., baptized and chrismated) on or after Denho. However, for all Syriac Christians, Denho is a time to reflect on the consequences of at least the first two stages of our Initiation, namely, what happened to us by being baptized (incorporation into the Church, the Body of Christ; and the door to life in the Holy Trinity being opened); and in Chrismation and outpouring of the Gifts of the Holy Spirit (wisdom, knowledge, understanding, courage, counsel, piety and holy fear), leading us to experience the Fruit of the Holy Spirit (joy, peace, love, gentleness, self-control, patience, kindness, faith, etc.).”