We are God's Co-workers 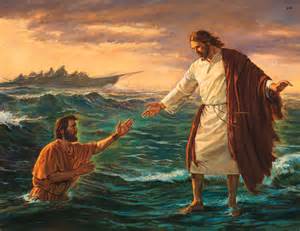 On Monday, July 20, the Maronite Servants of Christ the Light facilitated an afternoon of prayer and reflection for the children enrolled in the three week “Summer Fun” program at St. Francis Xavier Elementary School in Acushnet, MA. 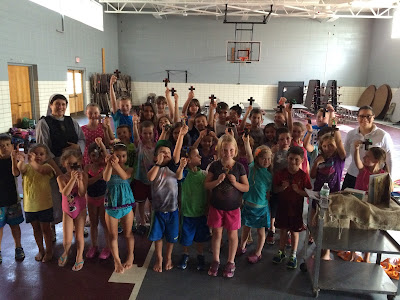 Our afternoon began with lots of fun, with the children participating in the game “Jesus says”. Mother Marla Marie used the game as the first point of reflection for the afternoon, “do we want to do what Jesus says?” and “what does he say?” The children answered that Jesus wants us to love, to give, to be kind. One boy even answered that Jesus wants us to follow the “Golden Rule.”


Mother Marla Marie explained to the children that Jesus wants us to give our all in loving Him and in loving others, and one way we can do that is by sharing. Mother Marla Marie showed a video to illustrate this point and then asked how they can make a habit of sharing in their own lives.  A craft project concluded the afternoon, and they were able to take home a decorated cross to remind them of their promise to share.
Email ThisBlogThis!Share to TwitterShare to FacebookShare to Pinterest
Labels: Youth

We welcome friends - Come and Visit Us 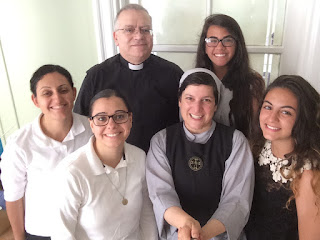 Seminarian Joseph Abisaad from Lawrence, MA with his nieces Regina and Gabrielle Abdelnour. 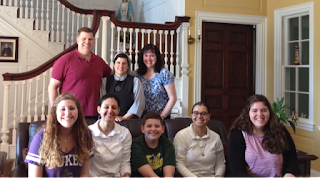 The Splan family from Arlington, VA.
Email ThisBlogThis!Share to TwitterShare to FacebookShare to Pinterest
Labels: Friends 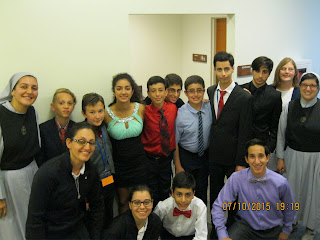 The theme was “Christmas in July”, with a focus on the Maronite Liturgucal Season of “Happy Announcements” leading up to the Glorious Birth of Our Lord. Each day focused on a different “happy announcement”, which also included daily Divine Liturgy and lots of time for fun and sports. 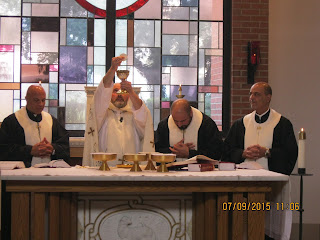 Beginning with the Announcement to Zechariah, the theme of the first day was fear. The youth were encouraged to look at their own lives and journeys of faith and see where fear may be crippling their growth.  As Jesus, present in the Holy Mysteries, was brought into the midst of the youth on that first night, they were encouraged to listen to his sweet voice telling them, “Be not afraid, I am always with you”.

The second day focused on the Announcement to Mary by the Angel Gabriel, and Mary’s visit to her cousin, Elizabeth. Fr. Gary encouraged the youth to use their imagination in thinking about just how Mary would have felt, as a young teenage girl, being asked to become the Mother of the world’s Savior? Mary said ‘yes’ without really knowing what she was in for, without really knowing how much her ‘yes’ would involve. Her trust in God was beyond measure. The youth were asked to consider how they can say ‘yes’ to God in their everyday lives. Some said “by praying more”, others said “by helping out more around the house”. 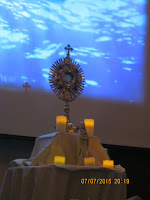 Not only did Mary say ‘yes’, but the next thing she did was run in haste to the hill country of Judea and share her gift of Jesus with her elderly cousin, Elizabeth. Mary made a complete gift of herself to everyone in need around her, and so the youth were encouraged to think about how they can give more of themselves to those in need, and the particular gifts they have received from God. That night, the youth were able to receive the gift forgiveness in the Mystery of Penance. 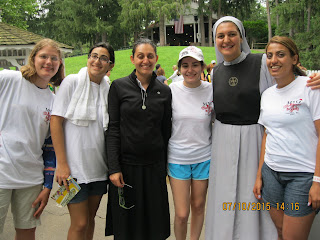 The third day of the Workshop focused on the Birth of St. John the Baptist and the Revelation to St. Joseph. The Birth of John the Baptist demonstrates the sheer joy that accompanies those who submit to the divine plan of God. Mother Marla Marie spoke to the youth about the joy of consecrated life, and the privilege of being able to serve God. On the night of the third day, the youth were able to experience the deep joy that comes from Christ’s healing presence in adoration, as each one was invited to come up and touch Jesus. It was a moving sight as each teen emerged from their encounter with Jesus deeply touched and unburdened. 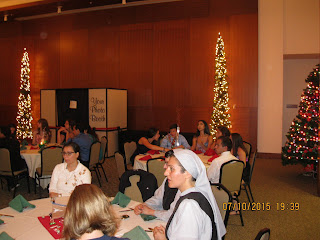 The fourth day focused on the Genealogy of Jesus and His Glorious Birth. As mentioned by Fr. Rudi Wakim in his homily for the day, Jesus came from a long line of sinners, and was born in a humble stable that housed animals, and probably didn’t smell too good. Now why would the King of kings do that? To show us how much he loves us, and to redeem all that is sinful in us.

The Workshop concluded with a fun day for the youth at the local water park, “Idlewild”, and the Christmas Ball in the evening.  God bless the efforts of all those involved in coordinating and assisting in this year’s Workshop. 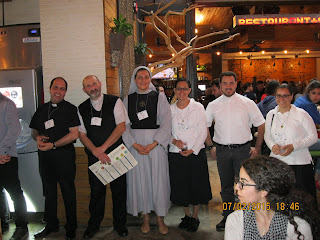 The Maronite Servants of Christ the Light attended this year’s National Apostolate of Maronites (NAM) Convention in Cleveland, Ohio from July 1st to July 5th, 2015. 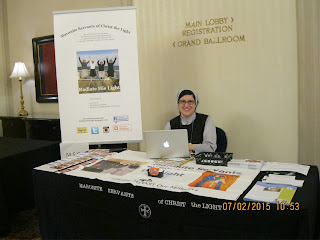 We were blessed with the opportunity to meet and mingle with over 1,000 of our Maronite parishioners who attended the Convention from all over the US, listen to  spiritual discussions, and participate in enriching events.
There were a number of highlights on the first official day of the Convention. We were able to listen to Dr. Charles Elachi, who currently works for NASA in the Jet Propulsion Team, about the current initiatives underway with space exploration. A beautiful insight for me was the connection that Dr. Elachi made between faith and science. Often many people believe faith and science to be at odds with each other. Dr. Elachi commented that by admiring the vastness of our cosmos he recognizes the hand of our awesome creator God.

Also on the first day, we had the great privilege of attending the evangelical concert of Lebanon’s great Christian singer, Joumana Mdawar, who reduced many in the audience to tears by her strong faith, radiant joy and sweet angelic voice.

Throughout the several days of the Convention, we also had the opportunity to attend and participate in events with our Maronite Young Adults (MYA), including Theology on Tap (ToT), and the MYA lunch with Bishops Gregory Mansour and Elias Zaidan, and other clergy. 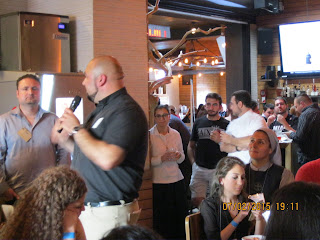 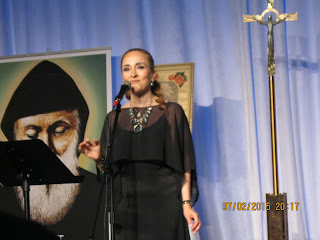 Another highlight on the second day of the Convention was listening to inspirational Maronite speaker, Rachel Muha. Rachel is a native Maronite of Ohio who was sharing the emotional and heart-wrenching story of how her son was brutally murdered at the young age of 19, and how God gave her the grace to forgive her son’s two murderers. Rachel discovered in the trial of her son’s murderers that these two men both had severe substance abuse problems for quite some time and came from impoverished families which showed them no love. This spurred Rachel on to found a not-for-profit establishment now known as the “Run the Race” Club in Ohio. The “Run the Race” Club is open to all underprivileged children that come from difficult family situations and broken homes, and are given the opportunity to have some fun and, most importantly, are shown a lot of much needed love. God bless her endeavors!

At the Closing Banquet of the NAM Convention, we were able to congratulate the winner of this year’s Golden Massabki Award, Therese Abi Habib, a parishioner of Our Lady of Lebanon Cathedral in Brooklyn, New York, and listen to famous Lebanese singer, Tony Kiwan.

May God bless the efforts and work of all those involved in this year’s Convention. It was a great success. We look forward to seeing you all next year in San Francisco, God willing! 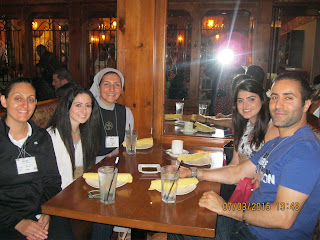 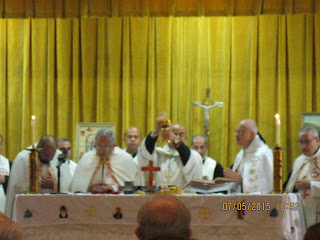 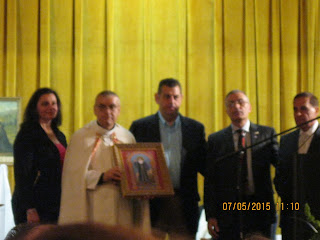 Knights of the Virgin Mary – Visit to our Convent 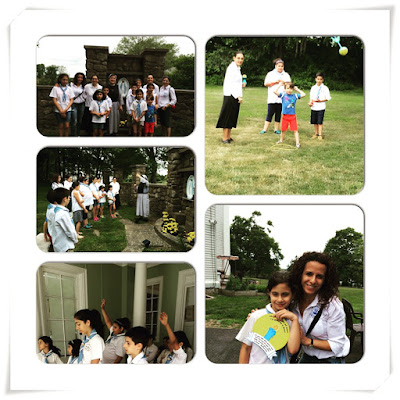 On Saturday, June 27, the Maronite Servants of Christ the Light hosted an afternoon of “pray and play” for the Knights of the Virgin Mary (Arabic: Fersen el Adra) from Our Lady of the Cedars Parish, Boston, at the Mother of Light Convent. Also in attendance with the Fersen children were their parents and coordinators.

Our afternoon began with lots of fun, with the children participating in games and enjoying the grounds of the convent, and enjoying pizza lunch.  The children and adults were then given a tour of the Mother of Light Convent, with an opportunity to spend some time with Jesus in our Chapel of St. Maron.

The afternoon followed with a spiritual talk from Mother Marla Marie about what we can do as Christians to become more like Jesus, focusing especially on the need to share what we have with others. They had time for a craft to remind them that must allow Christ’s light to shine before others in this world, which they, and then a visit to Our Lady’s Grotto to offer a decade of the rosary.

Nisrine Abou Rached, a parent and coordinator of Fersen, commented that “it was a blessed day, thanks for having us. We start our visit with yummy food, then games, movies, learning, craft and much more we can't thank you enough. We had a great time.”  For those interested in also holding a similar event, please contact the Maronite Servants at 508/996-1753. 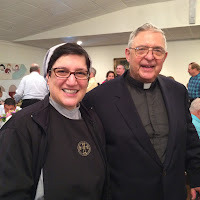 We attended the Eucharistic Celebration commemorating the Golden Jubilee of Fr. William Salmon at the Roman Catholic Church of St. Helen in Norwell MA on Sunday, June 28.  Fr. Bill, a priest for the Archdiocese of Boston, greatly assisted the Maronite Servants in the early stages of our establishment by providing us with accommodation in the convent on the premises of his former parish, Immaculate Conception in Weymouth MA. We lived there for two years before moving to the Mother of Light Convent in Dartmouth. May God continue to bless his ministry.
Email ThisBlogThis!Share to TwitterShare to FacebookShare to Pinterest
Labels: News
Newer Posts Older Posts Home
Subscribe to: Posts (Atom)