By Natalie Salameh
The Maronite Servants of Christ the Light facilitated a retreat day for the parish of Our Lady of the Cedars in Boston on Saturday, November 21 on the theme of  "Seeking His Light in Prayer - Praying with Sacred Scripture". 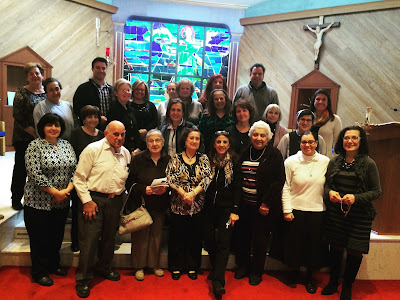 Mother Marla Marie guided the participants in a Lectio Divina (sacred reading), a traditional method of praying with sacred scripture attributed to St. Benedict. Mother Marla Marie highlighted that when we open the Word of God, it is his way of speaking to us, and he has something to tell each of us, but we have to listen. Lectio Divina helps us to do just that in four simple steps - read, reflect, pray and act.

Mother Marla Marie also spoke on the four movements of prayer, and how the Psalms of the Old Testament capture them so beautifully. Later in the afternoon, Sister Therese Maria guided the participants through each movement of prayer in an hour of adoration before the Holy Mysteries, focusing particularly on the praying of the Psalms.

We thank the Parish of Our Lady of the Cedars and their Pastor, Msgr. Georges El-Khali, for their warm welcome and participation.
Email ThisBlogThis!Share to TwitterShare to FacebookShare to Pinterest
Labels: retreat 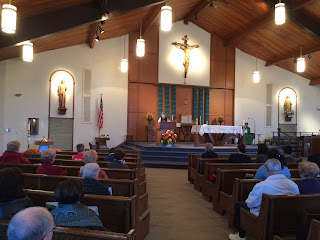 On Saturday and Sunday, November 14 and 15, Mother Marla Marie gave a short presentation on consecrated life and her own vocation story, at St. Julie Billiart Roman Catholic Church in Dartmouth.
She was invited by Father Richard Roy, pastor, to speak during Mass in honor of the Year of Consecrated Life called for by Pope Francis  (which concludes on February 2nd, 2016).  After each Mass, we had the opportunity to meet and greet the parishioners. 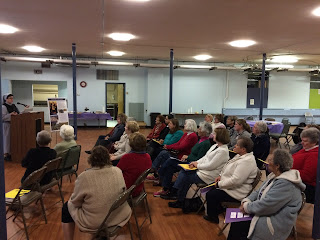 November Prayer and Supper
We hosted our monthly Ramsho (evening prayer) and Supper event on Sunday, November 15, at the Mother of Light Convent. In attendance were a number of friends and parishioners from St. Julie Billiart Church and Our Lady of Purgatory Maronite Church.

Our convent in Dartmouth, hosts a monthly prayer and supper evening at 5:00PM every second Sunday of the month (ordinarily).  The next Ramsho & Supper evening is Sunday December 13th   at 5:00PM. If you would like to join us for Maronite prayer and supper please call or email us a week in advance.
Email ThisBlogThis!Share to TwitterShare to FacebookShare to Pinterest
Labels: Eastern Churches, News

We attended and participated in the Mid-Atlantic East Regional NAM Convention on November 6 -8, 2015. Monsignor James Root and the community of Our Lady of Lebanon Cathedral in Brooklyn, New York hosted the convention with the theme of “In His Great Love and Mercy.”  The talks were to help prepare for the Jubilee Year of Mercy called for by His Holiness, Pope Francis, which begins on December 8, 2015.
Saturday’s schedule began with Safro (morning prayer), followed by a wonderful presentation by Chorbishop Seely Beggiani, former Rector of Our Lady of Lebanon Seminary, Washington D.C. Chorbishop Beggiani highlighted how our Maronite prayers and Liturgies emphasize God’s greatest attribute, his Mercy. This mercy is so clearly manifested God’s ready willingness to forgive us, and how we, as Christians, are called to be “God-like”, that is, to show mercy to others in generously overlooking and forgiving them their shortcomings. Chorbishop Beggiani also reminded us of what we often forget, that is, we desperately need the mercy of others to overlook and forgive our failings. “Blessed are the merciful, for they shall receive mercy” (Mt 5:7). 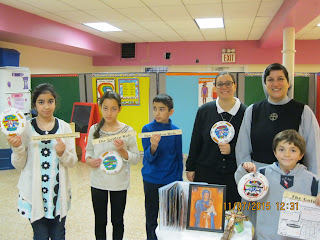 Following Safro, Mother Marla Marie facilitated a workshop for the children from ages 5 – 12. The focus of the workshop was “God’s Great Love for Us”. Mother Marla Marie highlighted to the children that God’s greatest gift to us, and the best way He showed us His love, was by sending His only Son, Jesus, to die for us and save us from sin. The children were encouraged to think about other ways in which God has shown them His great love. The children were each given their own Frisbee to decorate, as they “soar high with their Savior”, to always remind them that God’s love is the only thing they need to help them soar to Heaven.
Sr. Therese Maria shared her vocation story with other 70 teenagers in the MYO Workshop presented by Bishop Gregory Mansour, and encouraged them to open their hearts to our merciful Savior. Sr. Therese Maria also spent time with the MYA and Fr. Vincent Farhat, Pastor of St. Maron in Philadelphia, in a Q&A discussion on some of the faith challenges our young adults face in our world today. 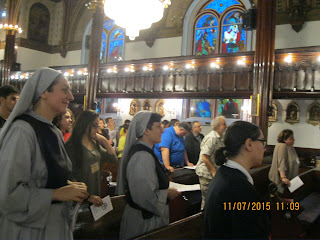 On Saturday evening, we had a wonderful time mingling with our people and clergy at the Hafli (banquet).  Sunday morning Divine Liturgy, was celebrated by his Excellency, Bishop Gregory Mansour who reminded us how it is often difficult to forgive those who have hurt us, but it becomes easier when we remember who we are, that we, ourselves, are sinners in need of God’s mercy. Sayedna quoted an interview from August 2013, when the Pope was asked, “Who are you? Who is Jorge Mario Bergoglio?” The Pope responded, “I am a sinner who has been looked upon by God”.

A CHRISTIAN RESPONSE TO ISIS FROM THE GOSPEL OF MATTHEW

It is called the “Teaching” Gospel because Matthew arranged the words of Jesus in an orderly manner.  For all who love the Word of God, this Gospel is for you! But beware, it also has some very difficult advice on ISIS.
In chapters 5 through 7 the most challenging of our Lord’s teaching shines through: the Beatitudes; the teaching on marriage; and the teaching against revenge.  It is here that we are close to the very words of Jesus himself, unfiltered and powerful.  Saving his other teachings on the sanctity of marriage, and the imperative of the Beatitudes to go beyond the letter of the law, let us take up our Lord’s teaching on retaliation, which is a clear window into his very personal response to the hatred and evil of his day, which he himself endured.  This teaching against retaliation is sincere, because he lived it himself, and he asked all who desire to follow him, to live it as well.
The words and stories that Jesus uses to describe his teaching are very much his own.  “You have heard it said an eye for an eye and a tooth for a tooth, but what I say is offer no resistance.”  He did not mean to be passive in front of evil; in fact, he himself was not passive. Instead he meant very clearly that we not fight evil with evil.  Jesus asks us to follow him, to be like him, to love like him, even our enemies, and to do well even to those who do evil. He invites us to resist like he did; not in the usual way, but rather in a creative way; and for this he gave us three very unique examples.
We know his examples as:  “turn the other check,” “go the extra mile,” and “give the shirt on your back.”  These expressions are based on popular parlance, because this is how we have watered down his teaching.  But what Jesus actually said is very different!
He did not say “turn the other cheek;” he said, “if someone strikes you on the right cheek offer him the left.” A strike on the right cheek could only be done as a back-handed slap, sending a clear signal that the one slapping is superior, and the one receiving the slap is inferior.  For Jesus this was not acceptable, he asked us to be defiant in the face of such cruelty, and not accept an inferior status, but rather demand that the oppressor strike us again, but this time as an equal!  Let us not forget how Jesus stood before Pontius Pilot, as an equal, even though the Roman leader claimed to have “power” over him.
...CONTINUE READING THIS ARTICLE ON THE BISHOP'S BLOG