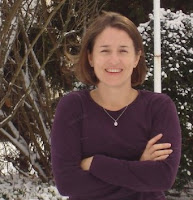 The Maronite parish of St. Joseph's in Atlanta honored their parishioner Tresa Van Heusen as she prepared to enter the Maronite Servants. On Sunday January 24th, a luncheon was hosted after the Liturgy to send Tresa off and wish her well. Watch this video of Tresa highlighting her time at the parish, and with her family and friends.  The photos and soundtrack offer a good reflection on vocation.  The video caption reads:
"In following the call that God has placed on her heart, Tresa is joining Sr. Marla and the Maronite Servants of Christ the Light. Our thoughts and prayers go with you, Tresa! We thank you for all you have done for us. We will miss you. Love, Your St. Joseph Maronite family - Atlanta, Georgia."
Email ThisBlogThis!Share to TwitterShare to FacebookShare to Pinterest
Labels: News, Witness

The United States Conference of Catholic Bishops is urging us to take action by contacting our Representative and Senators by e-mail, phone or fax.  Go to www.usccb.org/action to send a
pre-written, instant e-mail to Congress.  You can also call the U.S. Capitol 202-224-3121 or call your Members' local offices.
Email ThisBlogThis!Share to TwitterShare to FacebookShare to Pinterest
Labels: News, Pro Life

Office of Family and Sanctity of Life
Eparchy of St. Maron

As you know the 37th annual March for Life and Rally will take place in Washington, DC, Friday, January 22 to memorialize the 37th anniversary of the Roe versus Wade Supreme Court decision -- an unjust ruling that imposed abortion on all 50 states, and has already resulted in the deaths of more than 51 million children. The March is a great annual family reunion for the pro-life movement. Tens of thousands from across America arrive by bus and plane, and gather for a midday rally. They are encouraged by speeches from pro-life leaders, legislators, and clergy and by attending ancillary events. From Thursday through Sunday, many associated events will be held that are all centered around the main event which takes place at 12:00 noon Friday on the National Mall.

I know that a number of you plan to attend the events. I hope you find the information shared in this email helpful. Everyone realizes that the March is not practical for everyone. So, I ask simply that all those who will not be present plan to join spiritually with those who attend. You can do so by prayer and fasting, by watching the events via television or internet and by spreading the word.
Thanks to Joseph Hallal and the people of Our Lady of Lebanon parish in Washington, I am happy to share with you the proposed meeting place and time for all who wish to join together as Maronites for Life. We will meet January 22, at 10:00am by Starbucks at the corner of Indiana Ave. and 7th St. The nearest Metro station is on the Green/Yellow line and is the Archives-Navy Memorial-Penn Quarter Station.
Email ThisBlogThis!Share to TwitterShare to FacebookShare to Pinterest
Labels: News, Pro Life

I Consider it a Blessing

(A reflection of a father regarding the vocations of his son and daughter to the priesthood and religious life.)

Most of us, when we pray, ask God for good health, security, and happiness for our family and friends, along with other matters such as world peace. We pray for those around us, anyone in need, and thanking God for all the good that he provides for us. I am no different, except for maybe praying a bit more than most when it comes to saving my soul. However, how often do we get a solid, clear answer to our prayers, one to which there is no question that God provided?

My son and daughter have both made decisions to enter religious life; I have no doubt of their decisions being based on God’s plan, but I also see this as an answer to their prayers as well as mine and my wife’s. My wife and I are extremely proud of them and their decisions. Over the years, I did not pray specifically that my son and/or daughter would choose to enter religious life, but I have learned that this is one of the best possible ways to serve God, and therefore always supported this type of life for my children if that was God’s plan.


Support from others when they learn of what our children are doing is almost always very positive. It has been interesting to notice the hesitation in their responses and sometimes the surprise on their faces. Many thoughts surface during conversations about the decision to enter religious life; some of the common ones relate to “giving up a son or daughter” and not having them enter a profession, get married, have children.


For Marie and I, we have another son who is married to a wonderful lady, and they have given us beautiful grandchildren, so we are more than fulfilled in that area of concern. I do not look upon this as “giving up” our son and daughter; it is them answering a call from God. What better profession is there to join!


I consider it a blessing from God that anyone would be called to religious life. When it is your children, it is a matter that brings total joy!


(Chuck (currently serving in Iraq) is the husband of Marie, and father of Ian and Tresa. Marie’s reflection on priestly and religious vocations in her family was posted on this blog January 1st. Their son Ian is at St. Charles Seminary in Philadelphia, and on February 2, Tresa is entering the Maronite Servants of Christ the Light.) 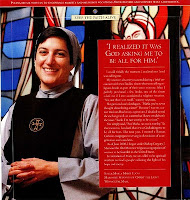 Sister Marla Marie is featured on the back cover of this month’s “Columbia,” the monthly publication of the Knights of Columbus. A friend and Knight sent her this email:

“From our initial KofC Snow Flake Project in West Scranton with you where we introduced you to the Knights many years ago, you have always set your sights high with the Lord on your side - now published to millions in the Official Knights of Columbus Magazine January 2010 Edition. What a great way to start off the year and the new decade.” In early November, I was pleased to meet Sister Marla Marie. I had heard much about her from my daughter Tresa and through the Maronite Voice. Sister was visiting with us in order to meet Tresa’s family and learn more about her. This February, Tresa will be joining sister in the new religious community of Maronite Servants of Christ the Light. I was a bit concerned because I wanted to make a good impression. I discovered that Sister’s greatest interest lay in answering any of my questions or concerns for my daughter.
At that time, she asked me to write about my thoughts and reactions to Tresa’s decision. I must say that I did not think much about “my” feelings, until Sister asked. I should add that Sr. Marla Marie was especially interested because I have two children entering the religious life. My youngest son, Ian, entered seminary this fall at St Charles Borromeo Seminary in Philadelphia. I often hear from friends and family comments about how hard it must be to give two children to God. I have to admit I never imagined it was my choice.
I tried to teach my children that, if we open ourselves, God will reveal to us our vocation (marriage, religious, teacher, doctor etc.). We can ignore Him or we can pray listen (discern) and then find our own unique calling in life. I believe that all three of my children have done that. It is not my place, as a mother, to impose my hopes for them, but instead to encourage and support them as they discover God’s plan.

So as I sit and write I begin to remember them as they grew up. I have always sensed in Ian, since infancy, a calling to religious life. There were signs I believed pointed toward that future for him. Now Tresa was a different story. She was strong-minded, determined and stubborn at a very young age. As she grew she used those traits to become a hardworking, resilient, devoted and unfailingly honest (to a fault) young woman.
I often wondered and worried if Tresa would meet a nice young man who could understand and appreciate her. Would she be blessed, as I have been, to fall in love and marry a good man who would, through their love, draw her closer to God? Also, of course, as a mother, I dreamed of a big beautiful wedding and of supporting her through motherhood, as the loving Nana.
And yet on the day Tresa told me she was being called to be a nun, the first thought to enter my head was not of loss. As I listened to her explain about the months of praying and discerning, and how she had come to realize God was calling her to serve Him and His Church, I was overwhelmed with a great joy for her! I can now stop wondering and worrying.
My daughter has found the One Man who will always love, support and understand her. Yes I give up “my” dreams of that beautiful wedding and Tresa blessed with children. I gladly let go of my dreams in order to embrace her reality, loving and serving in the greater family of all, The Catholic Church.