The Maronite Servants of Christ the Light offered a retreat day for the children of Our Lady of Mercy Parish, Worcester, MA, on Saturday, March 21 focusing on the Glorious Resurrection of Christ.

The Sisters made use of media, crafts, drama and music to explain in Jesus’ resurrection, he triumphed over sin and death forever, and so have we. As Jesus rose from the dead, so too will we rise with Him. We have no need to fear death, because Jesus promised us eternal life and a share in his resurrection.

The children enthusiastically played and sang the Mazmooro of the Sunday of the Glorious Resurrection with percussion instruments for their Pastor, Fr. Gaby Hoyek.  The day concluded with Fr. Gaby celebrating the Saturday Vigil Liturgy in which the children participated and assisted as altar servers, transferring the gifts, singing and reading.

For those interested in holding a similar retreat day at their Maronite Parish, please contact the Maronite Servants of Christ the Light by email sister@maroniteservants.org. 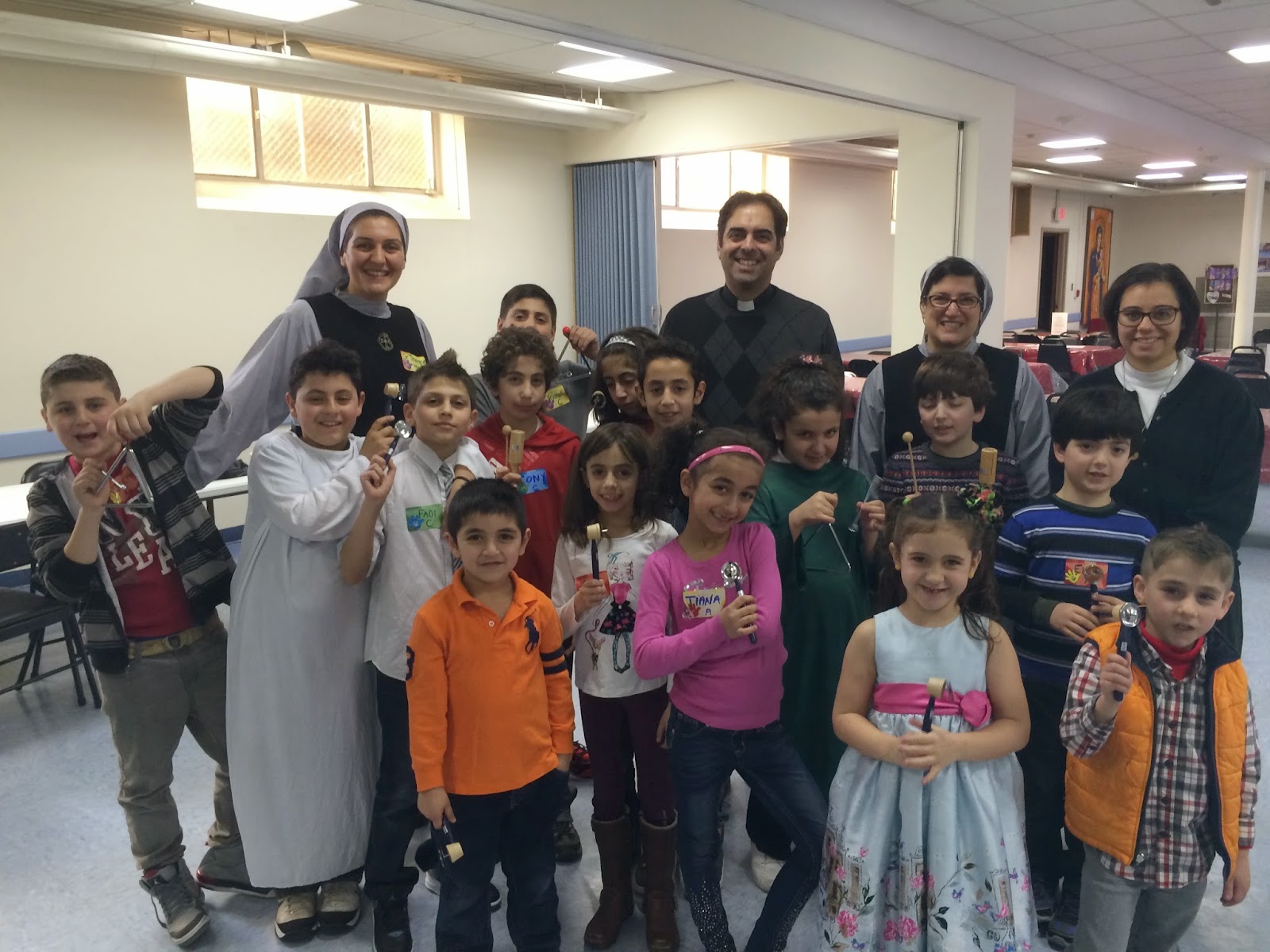 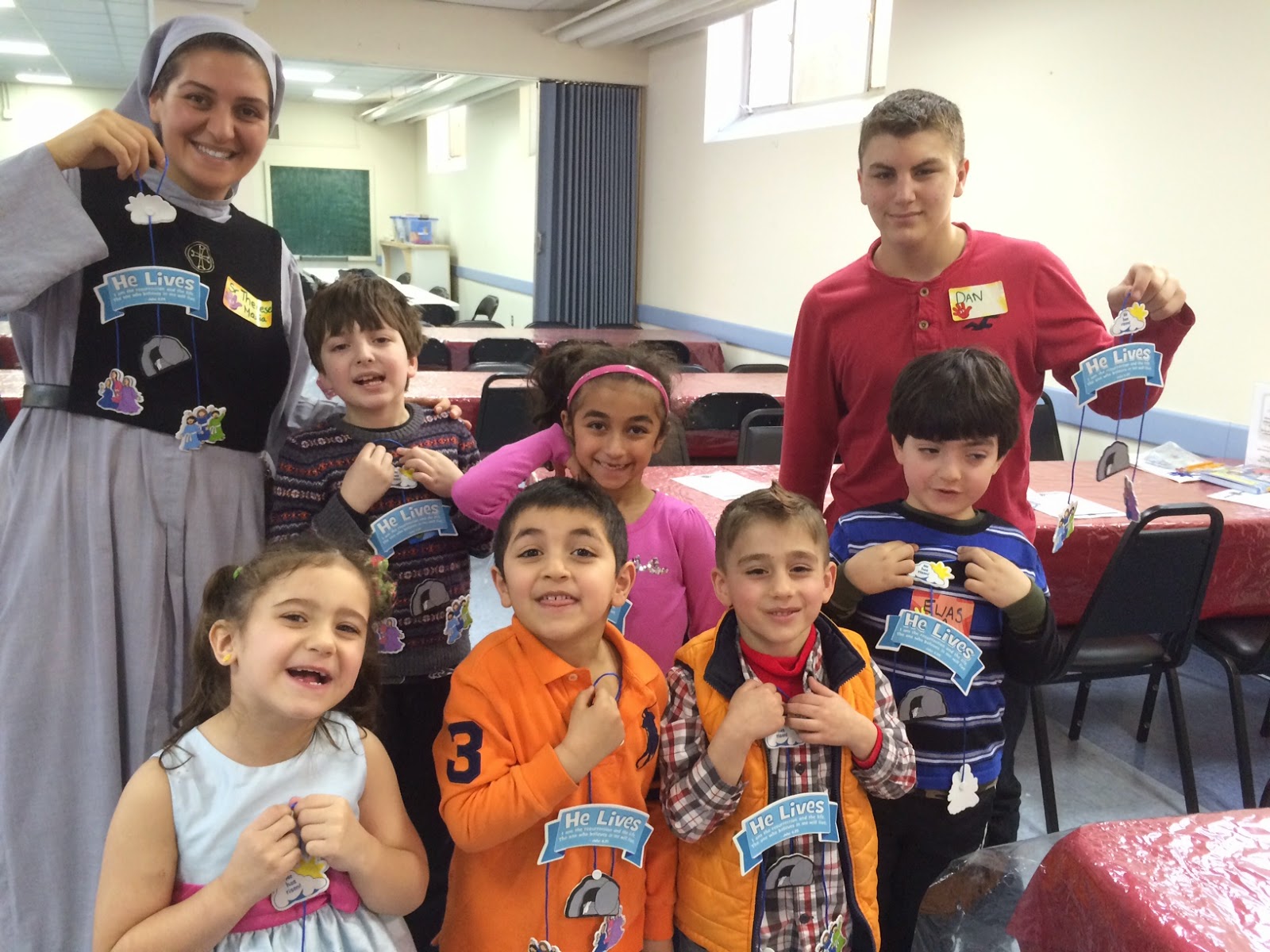 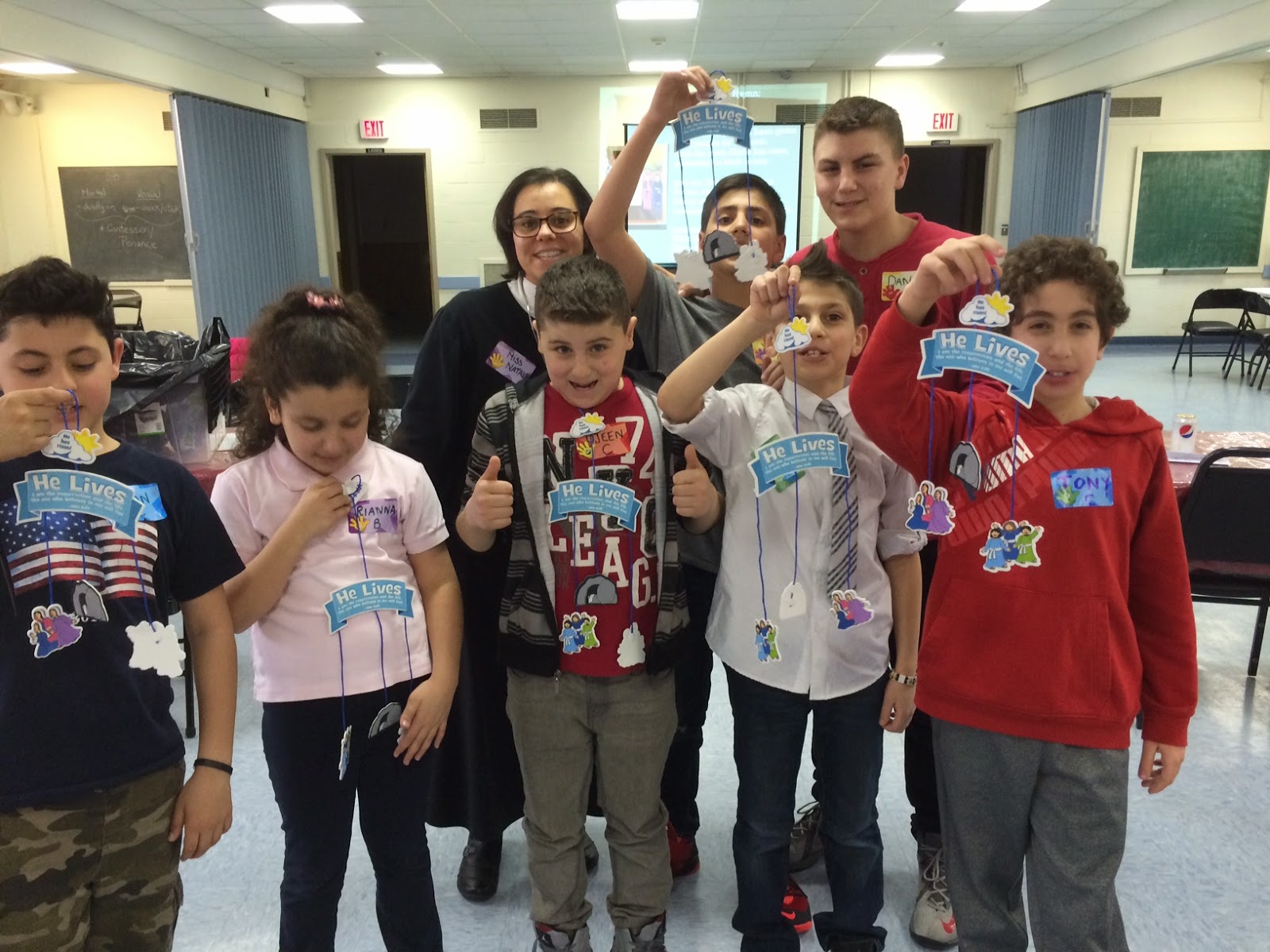 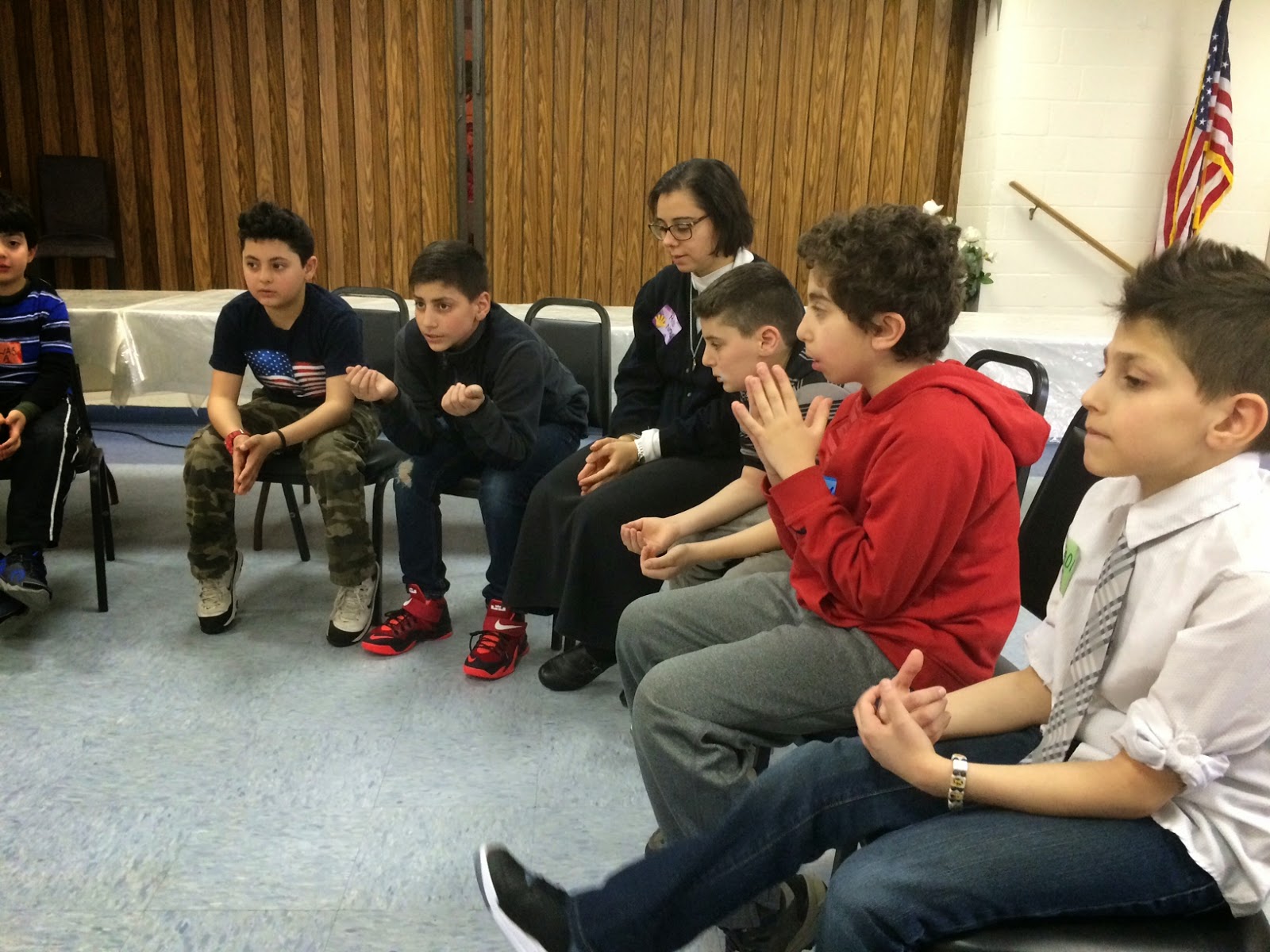 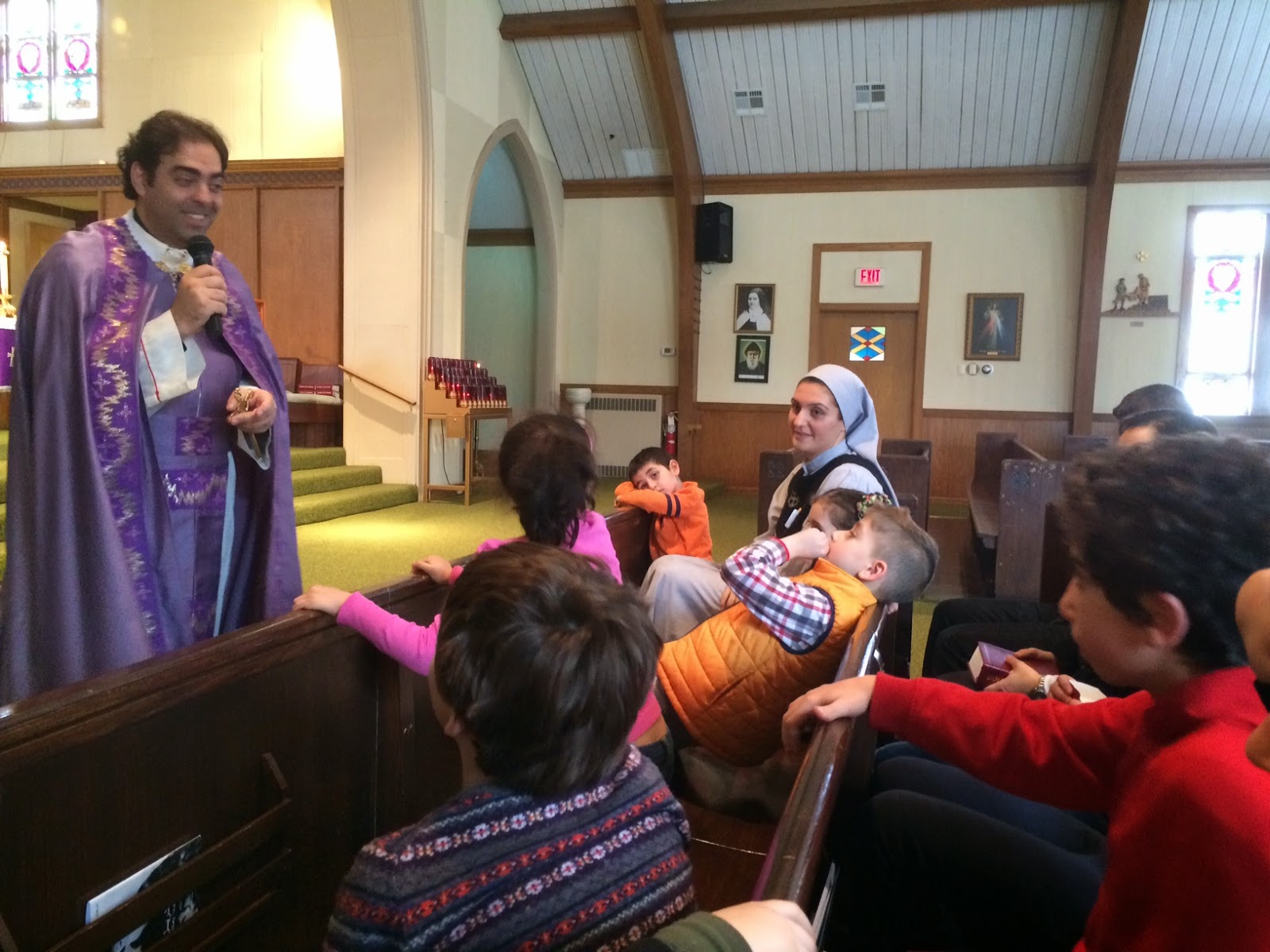 Lenten Retreat – “Loved As I Am”

We hosted and facilitated an afternoon of retreat on March 22 for young adults at the Mother of Light Convent in Dartmouth, MA.  The theme “Loved as I Am” was taken from the book by Sr. Miriam James Heidland S.O.L.T. When Sr. Miriam’s life as a successful college athlete proved unfulfilling, she went searching for something deeper and ended up falling in love with Jesus. 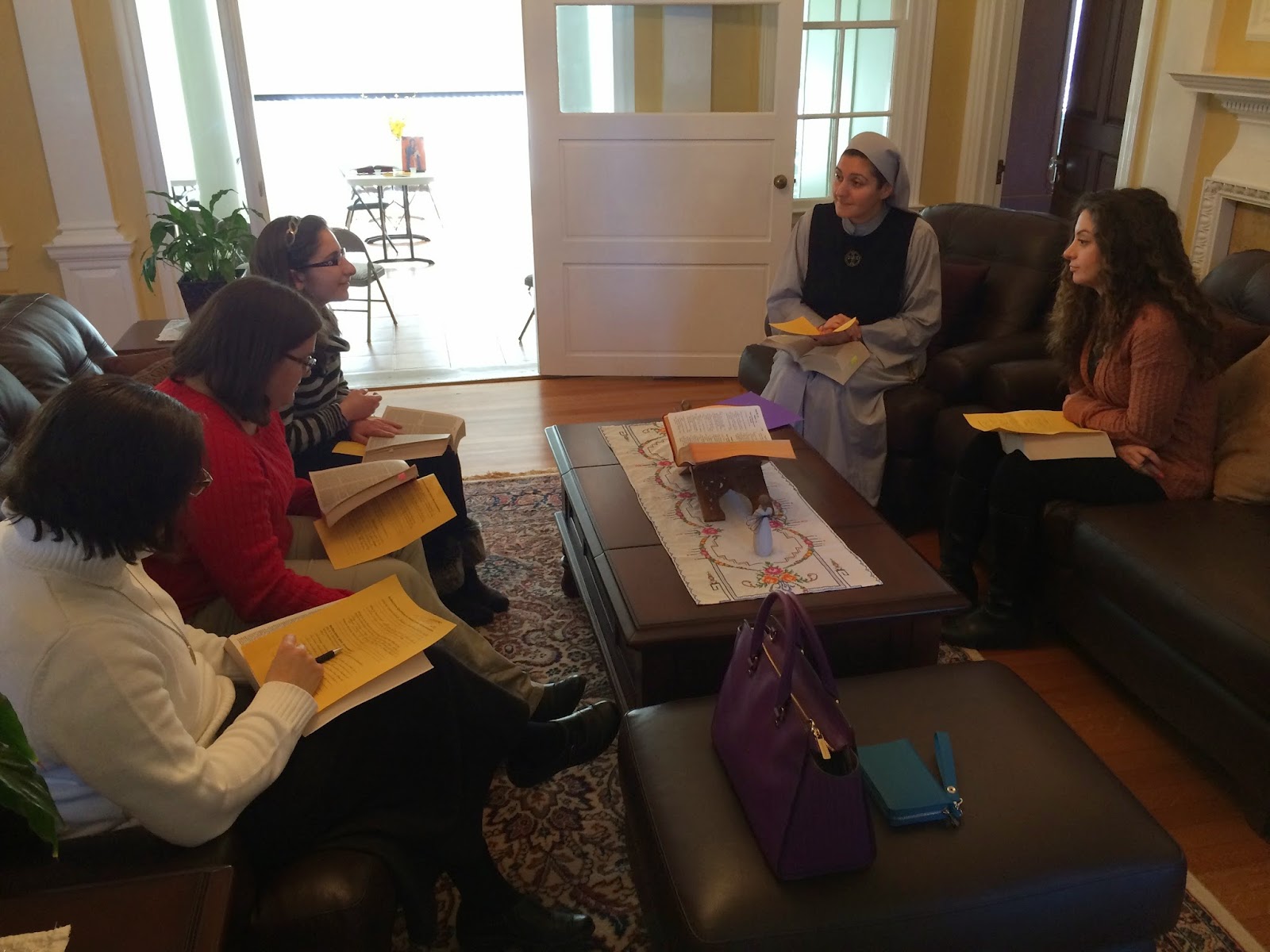 Sr. Therese Maria pointed out that we can all seek love in the wrong places, and depending on our personal struggles and battles, we can often turn to different addictions or ‘outlets’ to numb the pain. It’s supposedly easier than facing the reality of what’s troubling us.  But there is always hope because anyone who desires to know Christ can find him and know with a deep sense of conviction that he loves them infinitely. Jesus loves us as we are and where we are.

The young adults joined us for adoration before the Holy Mysteries, Ramsho and supper. What better way of knowing Christ, than spending time with Him in prayer.  Consider a retreat event for your parish group, call the Sisters 508/996-1753.
+++

MYO Spiritual Night at Our Lady of Purgatory 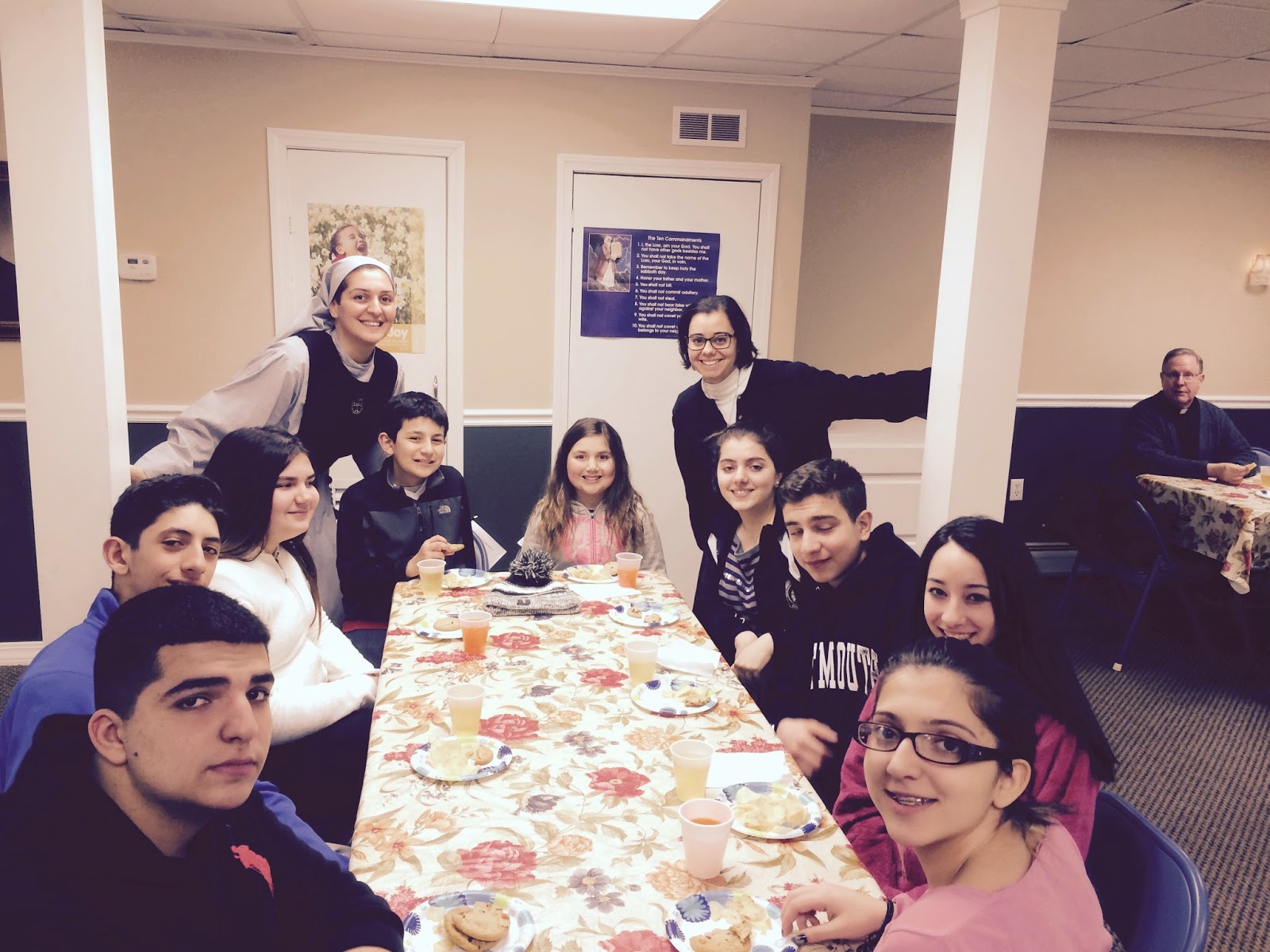 On Friday, March 19, the Maronite Servants of Christ the Light hosted and facilitated a night of spiritual sharing with the MYO of Our Lady of Purgatory Parish, New Bedford, following the Stations and Benediction of the Cross.

The teens viewed an excerpt from the movie, The Passion of Christ, and were asked to reflect on Christ’s sacrifice and what it means to them. The Sisters also gave a visual presentation on Maronite iconography depicting the Passion Week explaining the liturgical events leading up to the Glorious Resurrection. 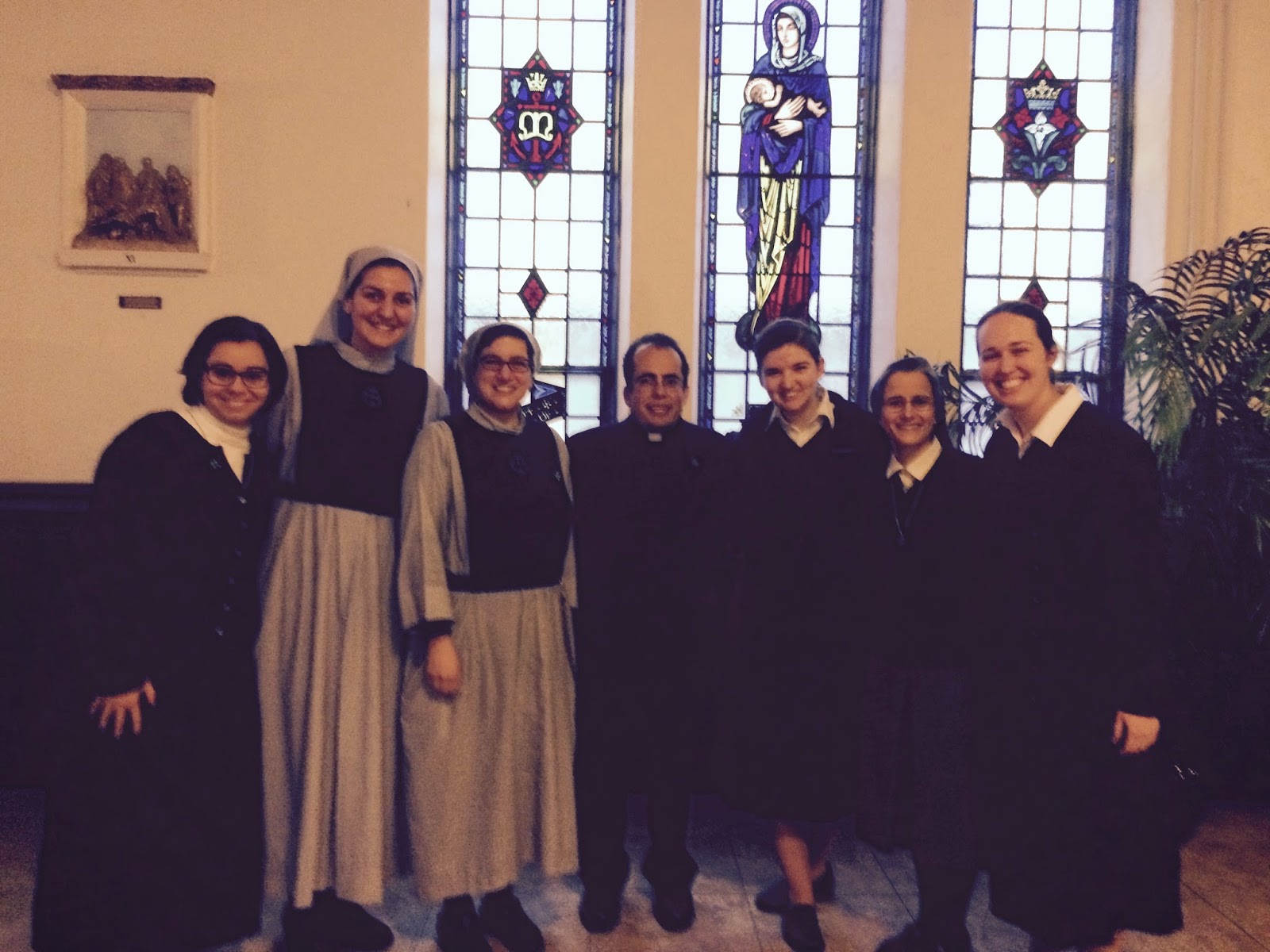 The Maronite Servants of Christ the Light, in collaboration with the Daughters of St. Paul, presented at a vocation discussion at St. Edith Stein Roman Catholic Parish in Brockton on Tuesday evening, March 17 where over 60 high school girls and their catechists attended.

Fr. Carlos Suarez, parochial vicar, hosted this event for the Year for Consecrated Life and the sisters from both congregations addressed the young women sharing on the joys of religious life, and vocation discernment. 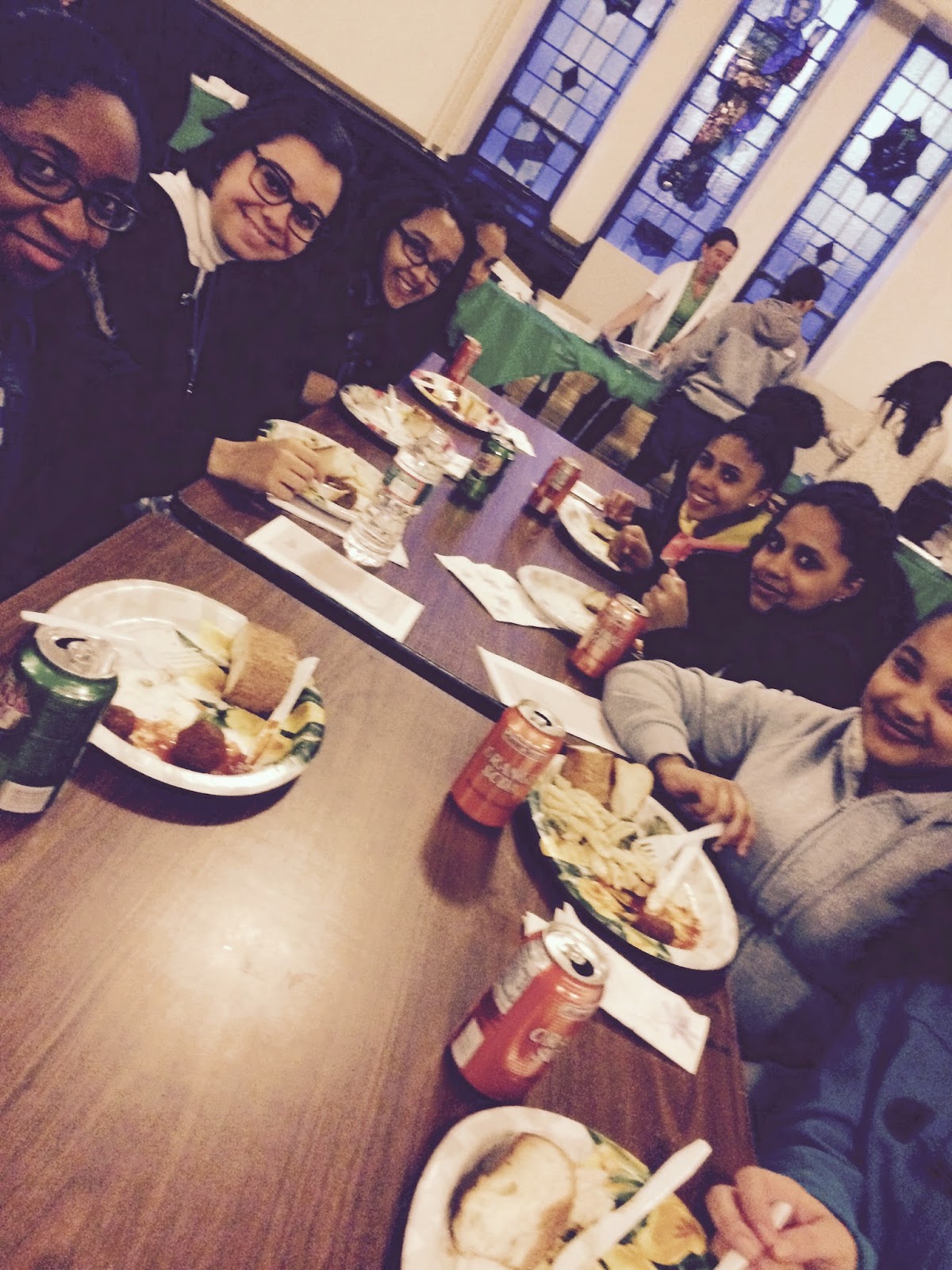 The evening began in Church with the Roman Catholic Liturgy of the Hours prayer and was followed by dinner. Afterwards, Mother Marla Marie opened the discussion offering points of guidance in discerning their vocations, whether to married life or to religious life. Specifically, Mother Marla Marie highlighted the various and unique ways that God continues to speak in our lives, and how we need to pay more attention. Natalie Salameh then gave her personal witness on how she journeyed with the Lord in her discernment leading to the Maronite Servants.  The Daughters of St. Paul also shared on their vocation stories and consecrated life. 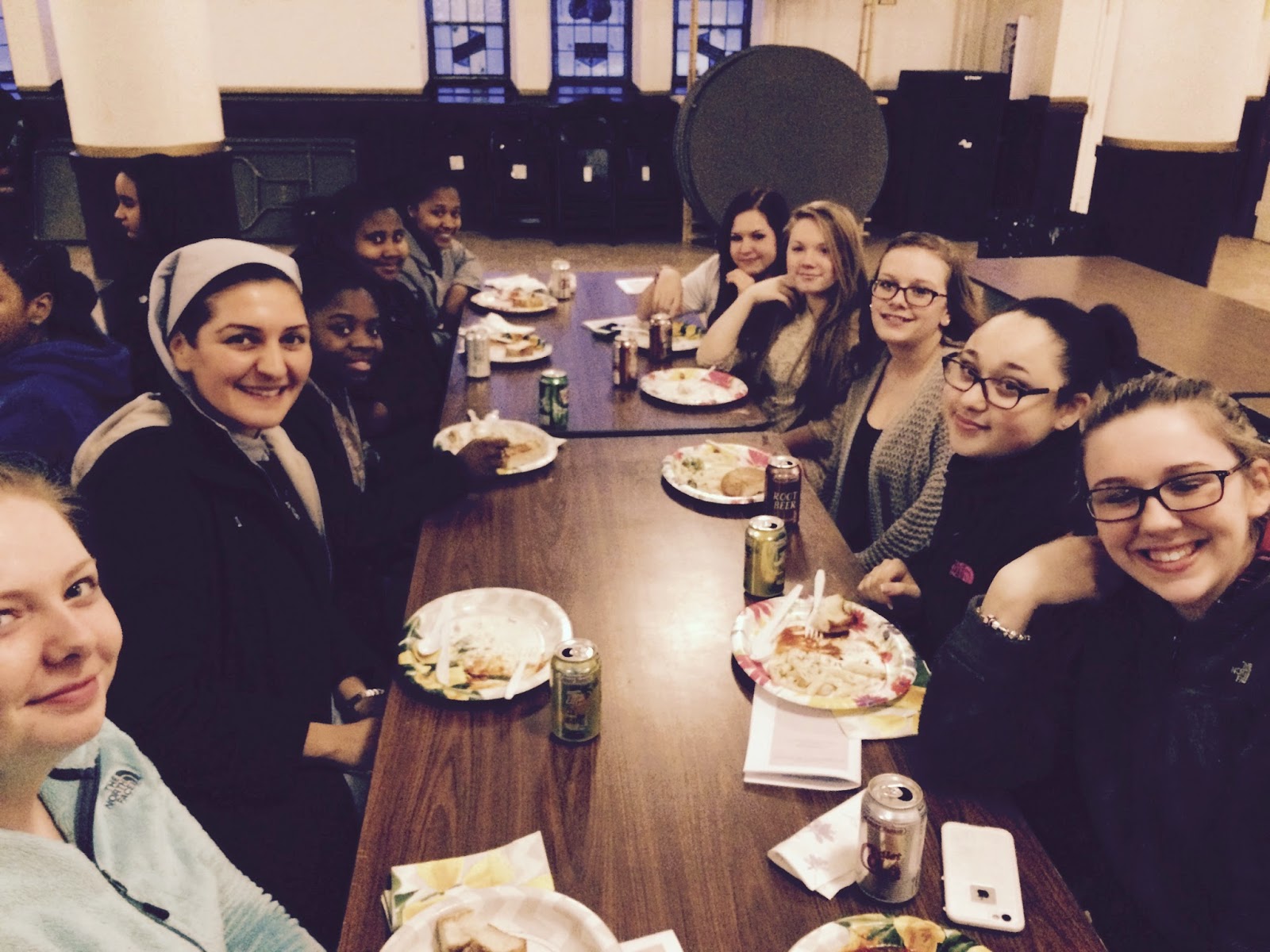 The night concluded with a Q&A panel of all the sisters, where the young women had many diverse questions such as, “what is the typical life in the day of a nun?” and “do sisters earn any income?”


In the feedback received from many young women that evening, it was evident that the Lord was at work in their hearts. Please continue to pray for vocations, as “the harvest is abundant but the laborers are few” (Luke 10:2).
Email ThisBlogThis!Share to TwitterShare to FacebookShare to Pinterest
Labels: Vocation, Witness 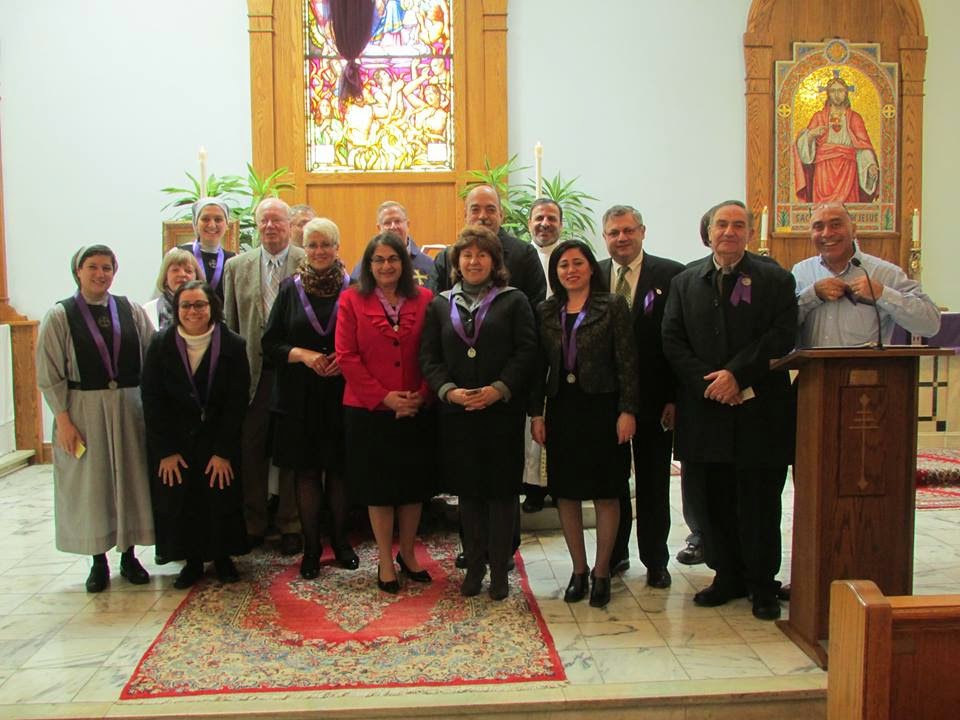 
The Sodality of St. Joseph at Our Lady of Purgatory (OLOP), New Bedford welcomed 13 new members on March 15. The initiation ceremony took place during Divine Liturgy, celebrated by Fr. Jack Morrison, pastor. The Divine Liturgy concluded with the benediction of the icon of St. Joseph, traditionally known in Arabic as Ziah Mar Youssef.

The Sodality of St. Joseph (also known as the Sodality of a Happy Death) was originally founded in 1648 in Rome. Subsequent chapters were established throughout the world. In 1918, (just one year after the founding of OLOP) a chapter of the Sodality of St. Joseph was established there. It is the oldest parish organization at OLOP and assists the parish in many ways by providing spiritual support through its prayers and devotions, and financial support through its fundraising initiatives.

Sunday of the Healing of the Paralytic

During the Maronite Season of Great Lent,  this Sunday, March 15, commemorates the miracle of Jesus’ healing of the paralytic.  The following is an excerpt taken from the Synaxarion of the Maronite Prayer of the Faithful. 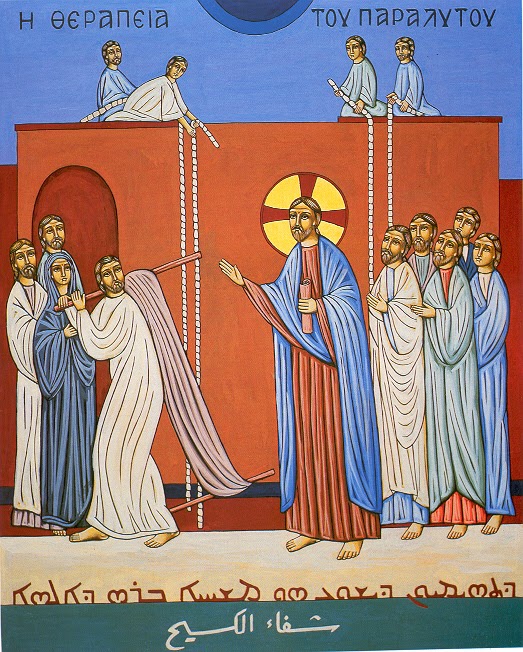 “We find that Jesus had returned to Capernaum. The house he went to was probably that of Simon Peter. By morning the house was filled with people. The crowd was filled with simple believers who wanted to listen to the Master, but mingled in the crowd were members of the Sanhedrin. The members of the Sanhedrin were not pleased with the teaching of this new Master and were seeking a way to entrap him.

One of the people who had heard about Jesus’ presence in Capernaum was a paralytic. Since he was unable to go on his own, he sought the assistance of four friends who would carry him. The crowds were surrounding the house, so the men were forced to go on the roof and lower the paralytic through a hole. Such actions were proof of the faith of the paralytic and his friends.

Jesus looked at the man and said, “Child, your sins are forgiven”. However, the forgiveness of sins was the prerogative of God alone. For any man to claim to do that was an insult to God and blasphemy, punishable by death (see Leviticus 24:10). The members of the Sanhedrin who were present were afraid to confront Jesus. But Jesus read their thoughts and questioned their doubts.

Since no one could determine whether a man’s sins had been forgiven or not, Jesus performed a physical cure; he told the man to get up and walk.

Many times Jesus comes to us, visits us. He comes to us with an idea, a word we hear, a person who is suffering or joyful. However, many times we neglect to notice him. Like the paralytic, we must expend all of our efforts to take advantage of the healing presence of the Lord. Let us seek the Lord with faith and humility, asking him to cleanse us.”
Email ThisBlogThis!Share to TwitterShare to FacebookShare to Pinterest
Labels: Liturgy

Our Mission at St. John the Beloved - Mount Druitt, Sydney

By Natalie Salameh
During our eventful two weeks in Sydney, Australia, the Maronite Servants of Christ the Light facilitated a children’s retreat and two young adult discussion nights at the Maronite parish of St. John the Beloved in Mount Druitt, Sydney. 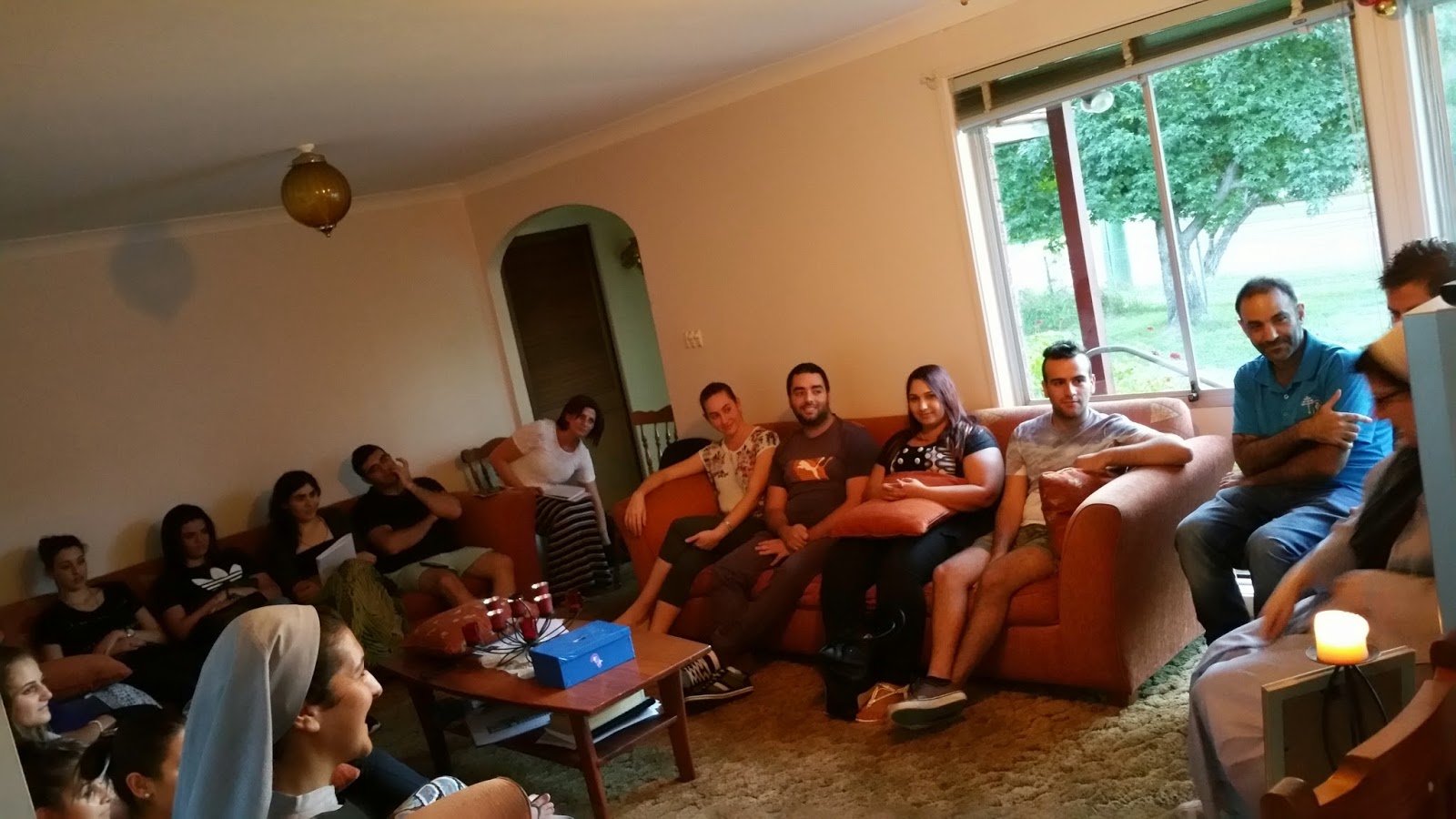 The first of our discussion nights on Wednesday, February 11, was delivered to the young adults of the parish who make up the Marian Apostolic Movement (MAM). Mother Marla Marie led the night’s discussion on “Catholic, but why Maronite?” As we went around the room, we gauged each individual’s view on what it means to be Maronite in the universal Catholic Church. Mother Marla Marie then shared on Maronite spirituality. 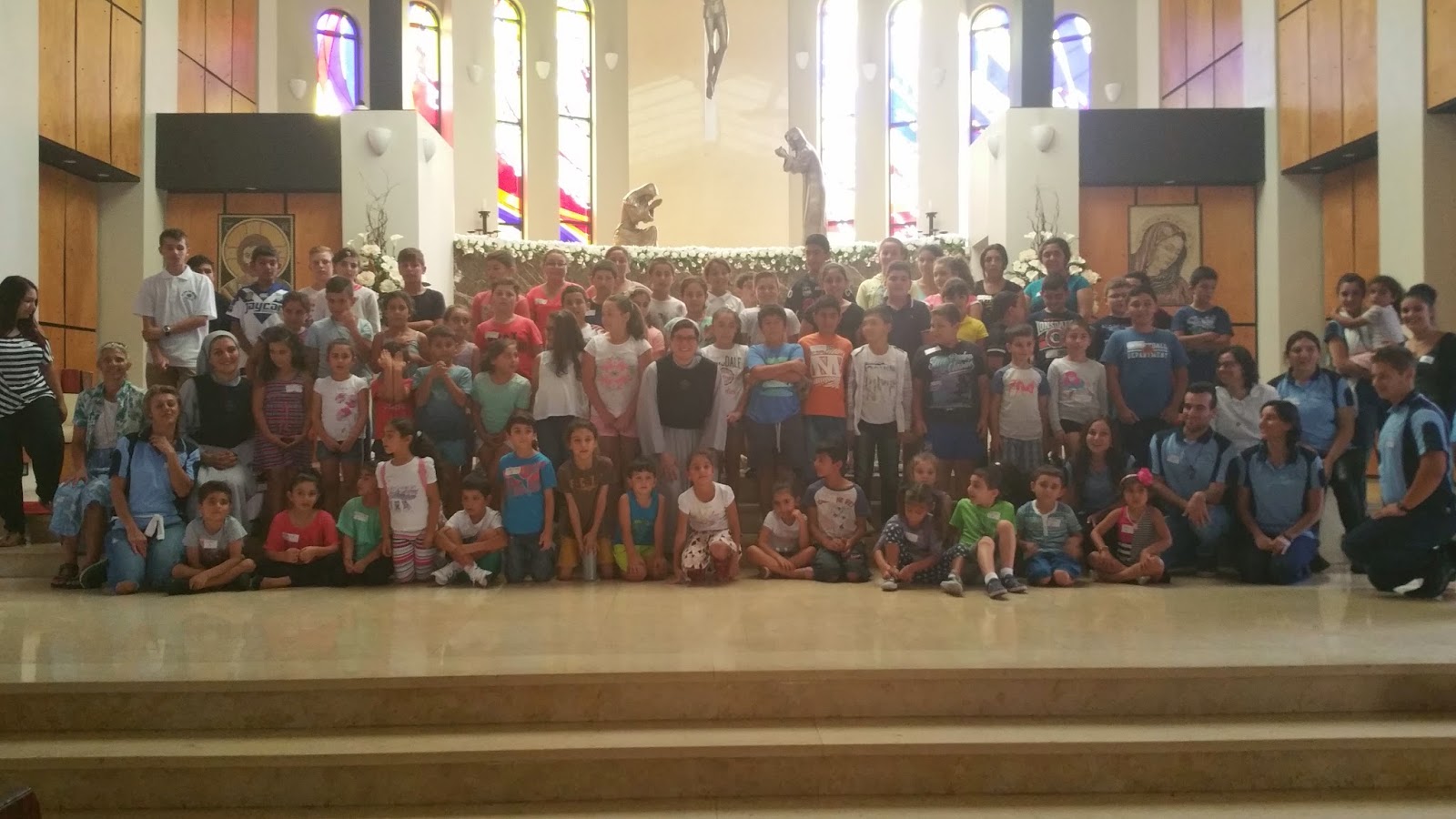 The Maronite Servants of Christ the Light conducted a Lenten retreat for the children of the parish on Saturday, February 21, on Christ’s saving love for us as exemplified in His passion, death and resurrection.   After various fun activities and ice-breakers led by Sr. Therese Maria, the children were asked, “who is the best gift given to us?” Then in a beautiful gift package, which one child enthusiastically opened, was a crucifix. The children were challenged to consider the sacrifice of Christ for all of us on the Cross, and how they follow Jesus in their resolutions for Great Lent. 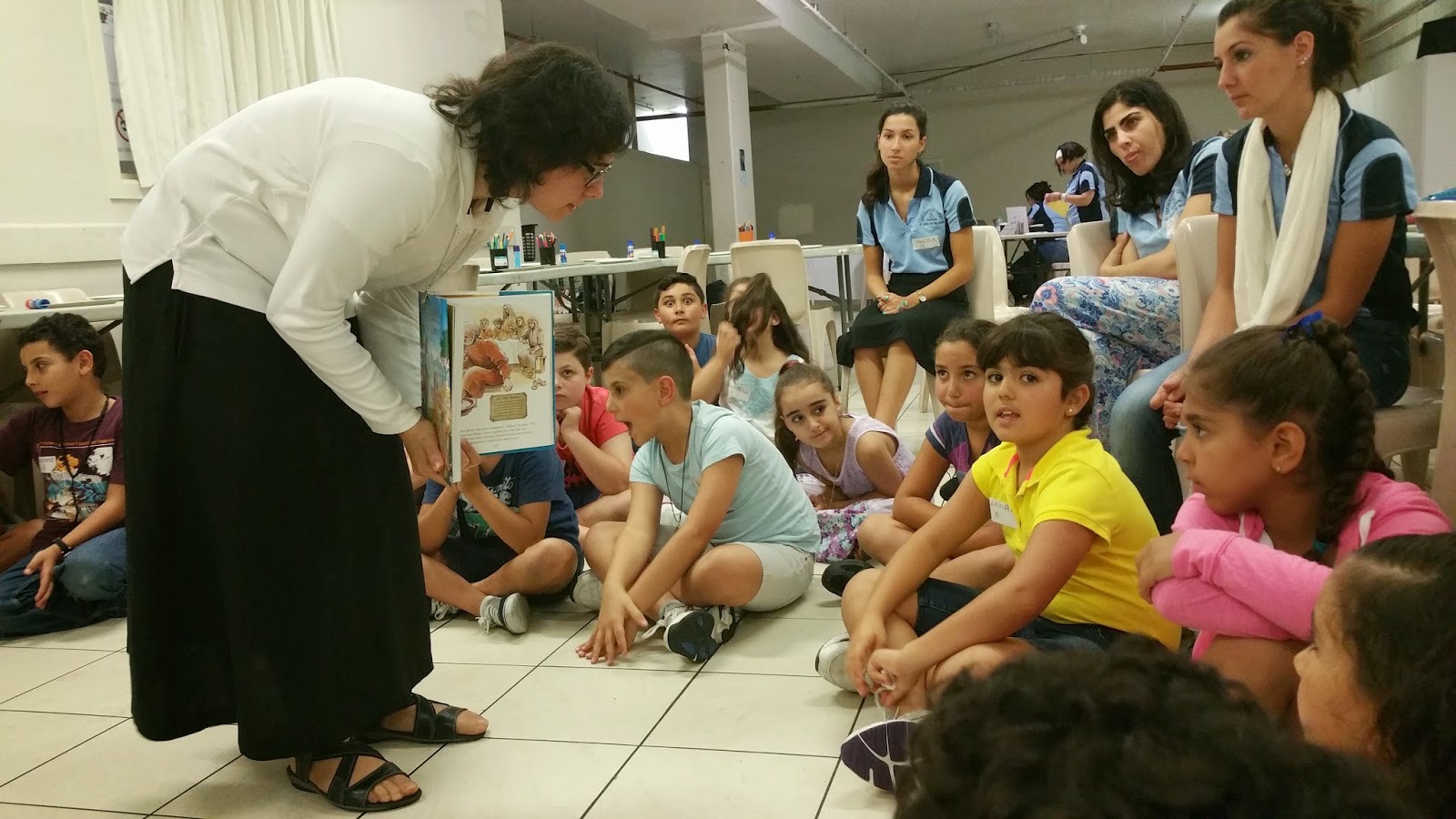 After watching an animation of the passion, death and resurrection of Jesus, the children came up with their own Lenten sacrifices, and decorated crosses as a reminder of Christ’s great love for them.  At the end of the day, we prayed a Living Stations of the Cross, which were acted out by the older children. 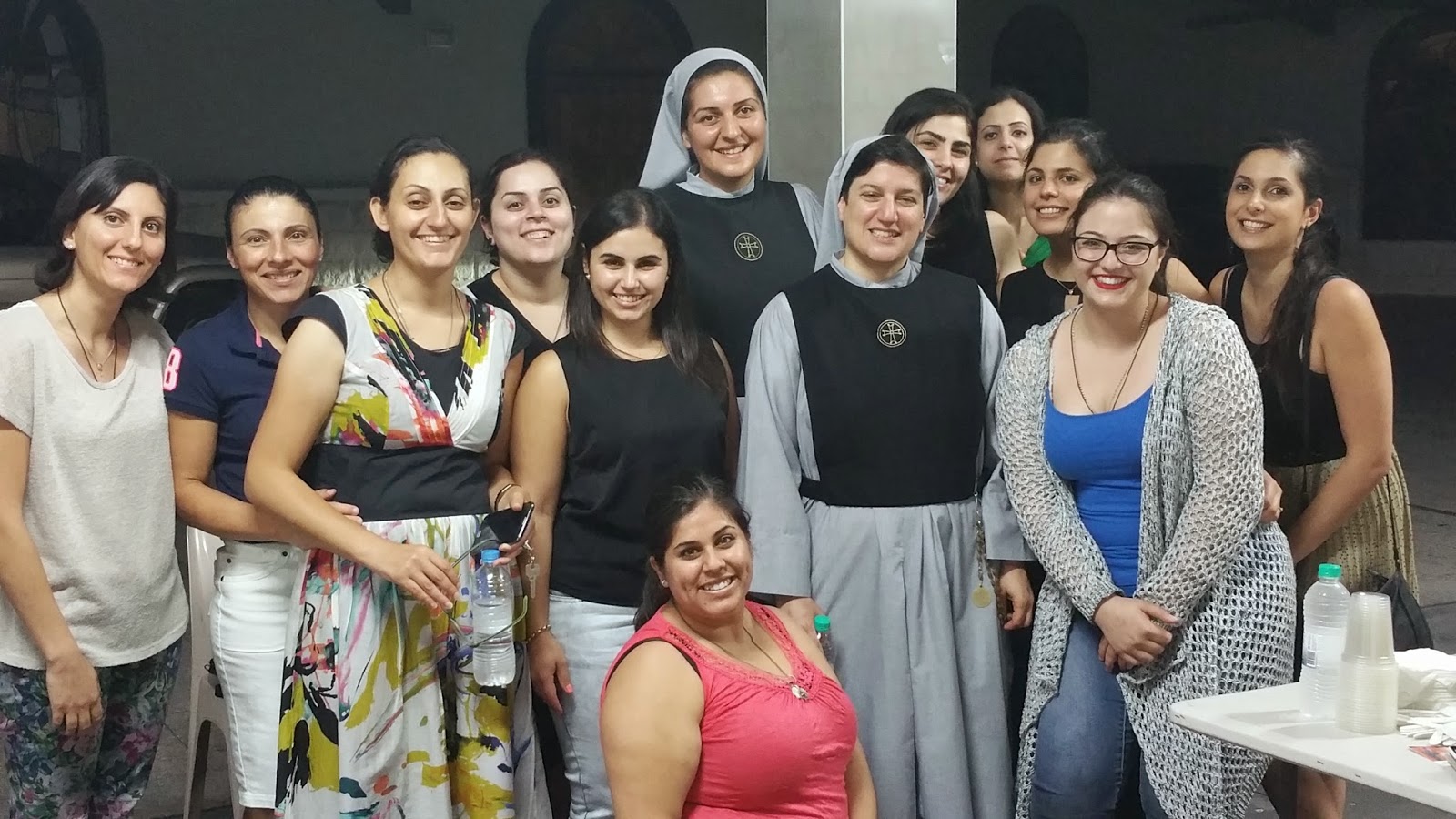 On Sunday, February 22, following Divine Liturgy, the Maronite Servants of Christ the Light facilitated a discussion on discernment with young women of the parish. This generated good questions on spirituality and clarified areas of confusion.
Email ThisBlogThis!Share to TwitterShare to FacebookShare to Pinterest
Labels: News, Vocation, Youth
Newer Posts Older Posts Home
Subscribe to: Posts (Atom)