Blessing of the Holy Oils 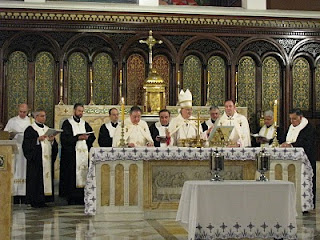 On Tuesday the 23rd of March, the Maronite Servants traveled to Our Lady of Lebanon Cathedral in Brooklyn to attend the Divine Liturgy with the Blessings of the Holy Oils. Bishop Gregory Mansour concelebrated the Liturgy along with Chorbishop Michael Thomas, Abouna James Root, several other priests and deacons from our Eparchy. During the Liturgy, Bishop Gregory blessed the two holy oils present – the Oil of the Catechumens used at the Mysteries of Baptism and the Ordination of Priests and the Oil of the Sick used for the Anointing of the Sick. The third Holy Oil used in the Holy Mysteries of the Church – the Oil of Chrism – was not blessed in Brooklyn, but rather will be blessed by our Patriarch in Lebanon during Holy Week and then distributed to all the Maronite Churches in the world. 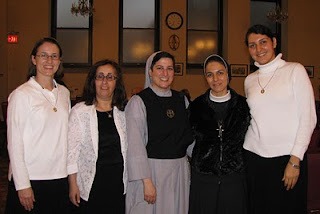 On Mission in Danbury

Last weekend, March 20th- 21st, the Maronite Servants of Christ the Light visited St Anthony of Padua parish, in Danbury Connecticut. Father Jean Younes, Pastor graciously welcomed us as did the parishioners. After the 10:00am Sunday Liturgy, the MYO hosted a bountiful breakfast. During our visit, we were blessed to meet and speak with Father Elias Kesrouani, who is an expert and lecturer in the Syriac language and music, and is a visiting professor of ethnomusicology at Yale. Father Elias played the oud a traditional string instrument and beautifully sang hymns in Syriac and Arabic for the Liturgies. 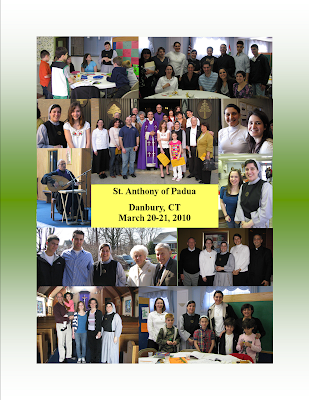 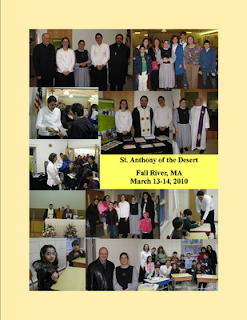 On the 13th and 14th of March, the Maronite Servants visited with the parish of St. Anthony of the Desert in Fall River, Massachusetts. Sister Marla Marie shared her personal vocation journey at each Divine Liturgy, as well as the mission of the Maronite Servants. During the Religious Education sessions on Sunday, Sister Marla Marie, Tresa and Therese visited the classrooms to talk to the children about the role of the Sisters in the Church. The weekend was a joyful event for the Maronite Servants and a great opportunity to meet more of our Maronite family members! The Pastor, Monsignor Kaddo and Fr. Nadim, assistant priest welcomed us with a generous hospitality.
Email ThisBlogThis!Share to TwitterShare to FacebookShare to Pinterest
Labels: News, Photo Collage 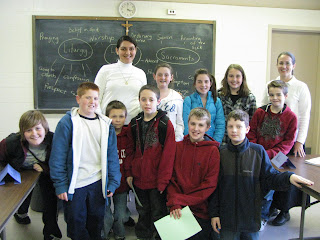 Religious Education
As postulants, Tresa and I have been team teaching 5th grade Religious Education at the parish community of Immaculate Conception, Weymouth (the location of our current Monastery). We have a great group of children who participate well and ask well thought out questions about the Faith.
Food Pantry 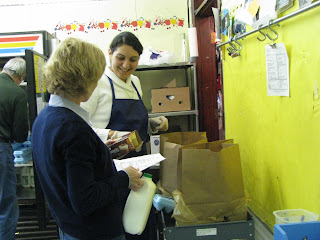 Every last Thursday morning of the month, Tresa and I also help out in the Weymouth Food Pantry, which serves the needy in our community. In February, we had an awesome and rewarding time assisting to pack orders. We served alongside the great team of volunteers helping to serve the orders and pack items. God bless their much good work!
Classes at the Chancery

During March 2nd to March 4th we formally began our first classes with Sayedna Gregory, Abouna Michael Thomas and Abouna Jim Root at the Chancery in Brooklyn. Our three day visit was eventful and enlightening, as we studied more about our Maronite faith, prayed together and share some great laughs in between. We are pictured here in our Maronite Spirituality classes given by Sayedna. He focused on the importance of true prayer, the need for solitude, hospitality and spiritual direction in the spiritual life.
Hafle at Our Lady of Purgatory
On Saturday March 6th we were invited by Abouna Jack Morrison to their annual Hafle at Venus de Milo in Swansea, MA. We had great company at our table with Abouna Jack, Abouna Kaddo and the Kenyon family. In the Photo from Left to Right: Peter Kenyon, Mother Marla Marie, Marie Kenyon, Therese Touma, Marie McLaughlin, Tresa Van Heusen & Joanne Mansour. 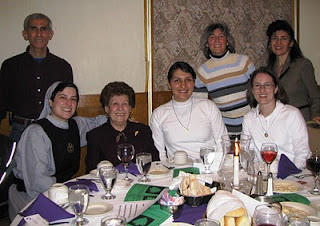 Coming Home to the Maronite Church

I became a Maronite Catholic on New Year's Day. I was so excited to begin 2010 embracing my true spiritual heritage as a Maronite!

Eight years ago, I converted from atheism at St. Veronica Catholic Church in northern Virginia. A few years later, my husband, Tom, and I moved to Roanoke Virginia. Pregnant with our third child in three years, I dispatched Tom our first weekend there to the Knights of Columbus Superbowl party with instructions to “find us some good Catholic friends!” He did and it was those friends who invited us to attend their parish, St. Elias Maronite Catholic Church.

The first time I attended the Divine Liturgy, it was both confusing and compelling. It was so different from what I was used to, but I was drawn to the unmistakable reverence and majesty of it. Soon, we joined the St. Elias family.

At times, I struggled to adapt to Eastern spirituality. As an adult convert, I had devoured books about the faith and enjoyed theological discussions. But when I asked our Maronite priest theological questions, his answers often seemed vague. It took me a long time to understand that there is a reason the sacraments are called “mysteries” in the Eastern churches. It's not because the East lacks theological prowess, but rather, it rejects the theological precision that attempts to reduce God and his gifts down to a science. My analytical nature, along with years of studying apologetics, made it difficult to appreciate this “big picture” perspective.

It also could be challenging to have one foot in the Eastern church and one in the West. I was a Latin-rite Catholic, but I attended a Maronite parish. Which holy days was I going to observe? Then there were the differences in feast days. One Feast of the Epiphany, I taught our children about the magi. Then we attended the Divine Liturgy and learned about Christ's baptism in the Jordan. My children wanted to know if the magi had been baptized, too, after giving their gifts.

It was a conversation with Sister Marla Marie of the Maronite Servants of Christ the Light that finally illuminated what made Maronite spirituality unique: it is biblically- and liturgically-based. That helped me understand why I felt so much peace after each Divine Liturgy and why I was drawn to study Scripture more often.

I didn't appreciate how Maronite spirituality would serve me until our fourth child died in utero in 2007. Afterward, I was desperate to understand why God had chosen to end my child's life and allow such suffering into mine. I discovered that the only way to peace was to surrender my need to know all of God's reasons for taking him.

It was the Maronite view of God—that he is a loving father but a great mystery, nonetheless—that helped me understand that it was not necessary (or even possible) to comprehend God fully to believe in his goodness and unconditional love. “When one tries to describe the mystery of God in words, he can only stammer," says St. Ephrem, so aptly. The Maronite Church taught me what it means to “Trust in the Lord with all your heart, and do not lean on your own understanding.”  It helped me embrace more fully the child-like trust Jesus said we need to attain heaven.

During Holy Week of 2009, I experienced the distinct call to become a Maronite Catholic. I attended several liturgies and was in awe of their exceptional beauty and reverence. I was so joyfully happy and felt privileged to participate in liturgies that gave such glory to God. “You are a Maronite,” I heard whispered in my heart. I knew then that nothing could fit my soul as perfectly as Maronite Catholicism.

Being a Maronite has not come without some sacrifice. As the mother of four young children, I sometimes find the longer services and increased number of holy days challenging. And the first time I heard about the fasting requirements of Great Lent, I almost passed out. A Latin-rite friend joked that the Maronite motto ought to be, “Coming to Jesus the hard way.” But can there be any other way? Jesus promised us that discipleship is inextricably linked to sacrifice. And like a good parent, the Maronite Church challenges me to give more because it knows I need discipline to grow in holiness.

It seems appropriate I would begin my journey in earnest as a member of the Maronite Church during Great Lent. It feels like I have been traveling, but have finally arrived at my true home just in time to join my brothers and sisters in preparing for Our Lord. With my Maronite faith to guide me, I hope to grow ever closer to Jesus in this life and enjoy the gift of being with Him forever in the world to come.

Misty Mealey lives with her husband, Tom, and four children in Troutville, Virginia. 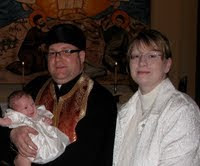