The Year of Saint Maron 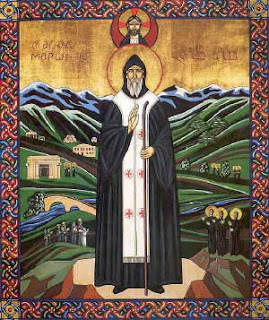 The year 2010 is very special to all of us who are in any way connected to our Maronite Church. His Beatitude Patriarch Nasrallah Peter Cardinal Sfeir has declared 2010 the year of Saint Maron.

How are we going to observe the special occasion? The examinations of our roots are both spiritual and cultural. Maron had no idea that almost 2000 years after his death, he is being remembered far from the land of his birth. He was a hermit, who wanted to remain hidden in a life of prayers and meditation. He was a light shining in darkness and we know a light cannot remain hidden.

The Church that grew from his followers and his monastery became known throughout the area. He was a priest as well as a hermit. His holiness and miracles attracted many followers. For Saint Maron, everything was connected to God our Father, and God is connected to all things. Maron did not separate the physical and the spiritual world and he used the physical world to deepen his faith and spiritual experience with God. He lived his life in the open air exposed to the forces of nature such as: the sun, rain, hail and snow. He wanted to know God’s presence in all things. By transcending such elements, he felt intimate with the Heavenly Father. He freed himself from the physical world and entered a mystical relationship of love with God.

Our recent Maronite Synod reminded us that the Maronite Church is not an ethnic group nor is it a political party; rather, it is a church with all the same responsibilities to evangelize the world like any Catholic Church. From the beginning, the Maronites were a missionary group and this should not change with us. We must be the modern day apostles of Maron and spread the Faith wherever we are. It is laity as well as religious who must carry the message of Christ with all whom they come in contact. In our own lifetime, we realize that the hermitage of Annaya and the Holy Valley of Saints still give us witnesses to the Maronite virtues that exist today.
Let us plan now to celebrate the Year of Saint Maron with a fresh spirit and vitality that was shown by the early followers of this great Saint.