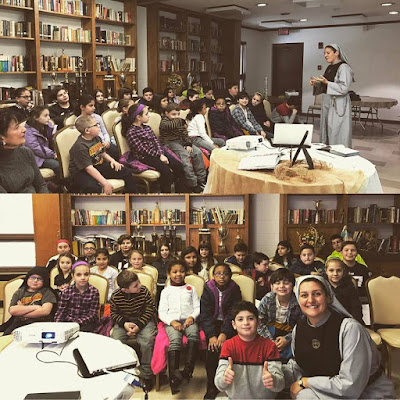 By Sr. Natalie Sayde
The Maronite Servants of Christ the Light offered a morning of catechesis on St. Maron to the children in the faith formation program at St. Anthony of the Desert, Fall River.
Sr. Therese Maria explained to the children the basic attributes of St. Maron’s character and spiritual life, and how he later became for us the Father-Founder of our Maronite Church.  St. Maron was born in the middle of the 4th century and was a priest who later became a hermit, retiring to a mountain in the region of Cyrrhus in Syria. It is believed that the place was called "Kefar-Nabo" on the mountain of Ol-Yambos, making it the cradle of the Maronite movement. His holiness and miracles attracted many followers, and drew attention throughout the empire.
St. Maron's way of life was deeply ascetical. He embraced a life of prayer, fasting and penance in the quiet solitude of the mountain. The children were shocked to learn that St. Maron lived his life in the open air exposed to the forces of nature such as sun, rain, hail and snow.
Discussing and explaining the spirituality of St. Maron was a beautiful segway into our discussion with the children on Great Lent, which for Maronites begins on Ash Monday (February 27, 2017). Sr. Therese Maria facilitated an activity with the children that encouraged them to ponder how they can imitate St. Maron’s asceticism during this Lent (in an adapted form of course). Some children said they would say extra prayers for the conversion of souls, whilst others said they would be more attentive to the instructions of their parents.
For those parishes interested in having us attend for a similar morning of Catechesis, please contact us at 508-996-7753 or sister@maroniteservants.org
You and your loved ones have been remembered in our Novena to St. Maron:
O Lord accept the prayers we offer to you in memory of our Father, St. Maron. Bless and protect the people who bear his name, make us worthy of his holy legacy that we may carry the message of Your Gospel throughout the world. Grant faithfulness to his people and courage to his inheritance. Amen.