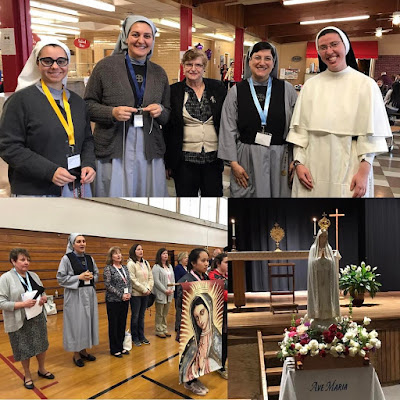 By Sister Natalie Sayde
On Saturday, May 6, the Maronite Servants of Christ the Light participated in a morning of recollection on the key theme and message of Our Lady of Fatima. This year is the Centennial anniversary of the apparitions, and the morning was presented and facilitated by the “Living The Fatima Message” Group at Bishop Connolly High School in Fall River.
The Maronite Servants of Christ the Light were asked to be exhibitors at this event, where we were able to meet many people and show case our charism. The morning was absolutely beautiful, and included adoration and confession; the recitation of a living Rosary in a number of different languages; a Rosary-making workshop; a play put on by Mrs. Elizabeth Montigny on the life of the Blessed Mother as depicted in the Joyful Mysteries of the Rosary.
The keynote speaker was Fr. Thaddeus Lancton, MIC,  (Divine Mercy Shrine, Stockbridge, MA) who spoke on the fundamental message of Our Lady of Fatima as being a call to penance and conversion. Mary echoes her Son, who began His preaching ministry with the call to “Repent, for the Kingdom of Heaven is at hand” (Mt 3:2).
Fr. Thaddeus described how in one of the apparitions, Mary showed the three children a vision of Hell, and how the children were absolutely horrified by the sight. Mary said, “Pray much and make sacrifices for sinners, for many souls go to hell because there is no one to make sacrifices for them.” (Our Lady, August 19, 1917). Following this vision, the children began not only accepting the daily penances that came to them in the form of ridicule and persecution, often by their own families as a result of these apparitions, but also taking on additional sacrifices. After what they had seen in Hell, they said that all they had to endure here on earth seemed light in comparison to the suffering and torment of that dark place.
This is fundamentally Our Lady’s Call, to say “Yes” to God in our everyday lives in what He chooses to send us, rather than rebel against His will. Fr. Thaddeus gave some very tangible examples of what penances Mary had in mind. For example, if we’re stuck in a traffic jam, to accept it and offer it as a sacrifice to God, rather than curse and rage. If our spouse is doing something to annoy us, to respond with patience and love, rather than with our usual anger and sharp retorts. These are the sacrifices that Mary wants from all of us, and through them all her Immaculate Heart will triumph.


“Jesus wishes to establish devotion to my Immaculate Heart in the world. I promise salvation to those who embrace it.” (June 13, 1917)
Email ThisBlogThis!Share to TwitterShare to FacebookShare to Pinterest
Labels: Mary
Newer Post Older Post Home