Who is Saint Maron? 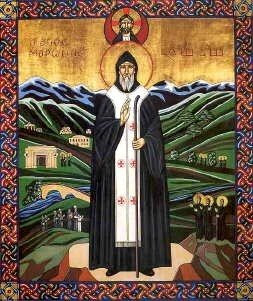 "Maron (350-410 AD)
Maron, a priest and hermit, known to John Chrysostom, walked the land once traveled by Peter and Paul. On the banks of the Orontes River, Father Maron converted an old pagan temple into a church. He spent his life teaching about the faith and ministering to many people with the gift of healing and counsel. Over 800 monks later followed in his footsteps. These early followers of the lifestyle and way of Maron were known as MARONITES.

Their history reveals great sacrifices of their lives and possessions for their religious convictions and freedom. They defended the Council of Chalcedon (taught Christ is God and man, and Mary is Mother of God). Maronites came to Mount Lebanon and later elected John Maron as their first patriarch in 687. By this, the Maronite Community became established as an organized church and Lebanon became the third geographical center of influence for Maron's family of faith.

From its monastic origins to today the Maronite Community of faith includes several religious orders of monks and sisters whose important ministries to the Church provide continued nourishment, growth and maturity. Maronites are Catholics of many nations and diverse cultures. Presently, the Mother Church is in Lebanon and daughter communities exist in ever nation of the world. Often the sons and daughters of Maron are referred to as Beit Maroun, (the house of Maron)."