Bishop Gregory has designated the following parishes as official Pilgrimage Sites to commemorate the “Year of Saint Maron,” proclaimed by Patriarch Sfeir in his Lenten letter of 2010:

• Our Lady of Lebanon Cathedral in Brooklyn, New York 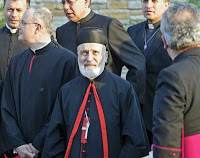 • Saint Anthony Church in Glen Allen, Virginia
• Saint Jude Church in Orlando, Florida
Pastors are strongly encouraged to promote and/or organize groups from their parishes and missions to make a pilgrimage to one of these sites, in celebration of the Jubilee of the 1600th year of the death of our Father, Saint Maron. Anyone making one of these pilgrimages, from June 29, 2010 – March 2, 2011, will receive an Indulgence according to the usual conditions.
Email ThisBlogThis!Share to TwitterShare to FacebookShare to Pinterest
Labels: Saints, Spirituality
Newer Post Older Post Home