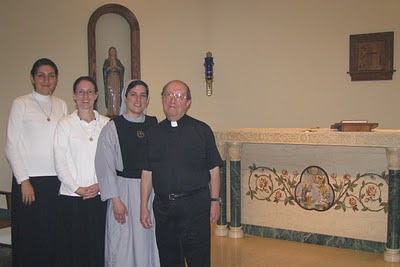 The Maronite Servants are in Washington DC this week to attend classes with Chorbishop Seely J. Beggiani , Rector of the Maronite Seminary. The topics we studied were Maronite Liturgy and Eastern Catholic Spirituality. We discussed the origins of the Liturgy and went through the parts of the Liturgy, making references to the chapters of Chorbishop’s books on ”Maronite Divine Liturgy and Eastern Catholic Spirituality”. Pictured here is Chorbishop Beggiani with Mother Marla Marie, Tresa and Therese at Our Lady of Lebanon Seminary Chapel.
Some highlights from class on the Divine Liturgy:

- The Quorbono (Syriac name for the Divine Liturgy) literally means to come close, God reaching out to us in the Liturgy and we the faithful reaching out to Him. It is not a static prayer but organic in its nature, flowing from one part to the other through its different elements. “The language, music, gestures, and ornaments of the Liturgy are directed to bring about dialogue and union between God and the worshipping community.”

- According to John Chrysostom, Church Father of the East and Doctor of the Church, he beautifully portrays the Liturgy as a “celestial spectacle” where we the faithful join and imitate the angels in heaven, as we sing praise to God in the hymn “Holy, Holy, Holy”. Chorbishop in his book captures this awesome idea about the prayer of the Liturgy “An invisible exchange takes place between earth and heaven. While on Earth, it is near the celestial throne.”

Relics of Blessed Teresa of Calcutta

On June 2nd we were blessed to see and honor the relics of Blessed Mother Teresa of Calcutta which were in the Basilica of the National Shrine of the Immaculate Conception. The Sisters of Charity were there at the Shrine reverently presenting and taking care of her relics which included her blood, hair, Rosary, Sandals and a piece of her Sari. We were grateful for this opportunity to honor her relics and to ask for her intercession. The picture is of us at the relics of Blessed Mother Teresa. 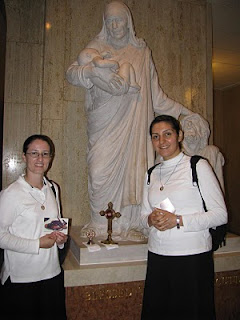